Kenya Give a Girl a Break?

Lucy Kibaki, COME ON DOWN!Being the First Lady of Kenya is a pretty tough job. Kenya is a decent country by Africa’s standards, but unfortunately for Lucy Kibaki Africa’s standards for comparison are countries like Sudan or Sierra Leone that exist as cauldrons of HIV positive blood out of which machinegun bullets occasionally erupt. Lucy Kibaki is the wife of Kenya’s president Mwai Kibaki. In addition to being president, Mwai is probably best known for getting in a near-fatal car accident and having a semi-public affair. Lucy Kibaki is the woman he was cheating on and she’s best known for crusading against HIV and slapping the shit out of reporters. You see, Lucy has quite a temper and she blames the media for intruding on her and her husband’s privacy much like George Clooney resents the paparazzi snapping photos of him picking a booger.

Good old Lucy isn’t about to waste her time holding an indignant and slightly pathetic “I hate the press” press conference. She just lists the people in the media she hates and then has the security police escort her around so she can beat the shit out of them. She will beat the shit out of them even if they didn’t say anything bad about her. I guess she just hates reporters that much.

President Mwai Kibaki's wife stormed into the offices of a Kenyan newspaper, slapped a cameraman and demanded to see the journalist who had written a story headlined "Shame of First Lady," witnesses said. […] But she chose the wrong newspaper to complain to -- it was the rival Standard daily that printed the offending article, witnesses said.

I have to confess that I am a huge fan of the more interesting characters produced by various African governments and Lucy Kibaki is right up there with the best. As an added bonus she does not have a history of mutilating or murdering people like many of the others. She’s a family-safe sort of fun and in this crazy workaday world we need more heroines who eschew genital torture in favor of glove-slaps to reporters.

Once I heard about Mrs. Kibaki’s latest rampage I immediately went onto Mugabebay – the only auction site dedicated exclusively to African government paraphernalia - to see what I could turn up. After a brief bidding war with “Krazy Leggs” I was able to win Mrs. Kibaki’s diary for a mere 37 dollars. 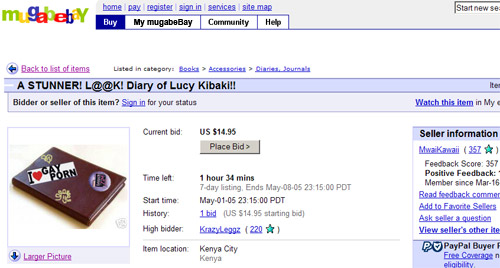 Such a historic document was meant to be shared with the world and as soon as I received it I set to work transcribing every single entry that I felt was noteworthy. That turned out to be pretty much all of them so I sifted through my transcriptions and picked out the ones that might interest people who are somehow not absolutely fascinated with the minutiae of African government. 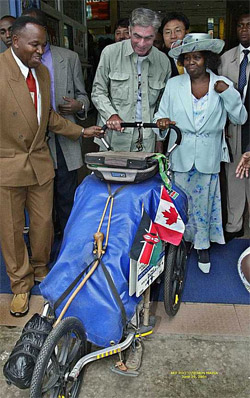 Luggage? A dead body? The physical manifestation of Lucy's madness?09-10-2001

My Liege,
It is good to have a diary to write in after all these years of tattooing my words of wisdom onto my inner thigh with an industrial laser. I hope to serve you well my paper master, for you shall drink deep of my teet of wisdom and I of your teet of college rule.
Love,
LUCY ^_^

Dearest Diary,
Today fire and pain came to the teaming glass and steel of New York City. Millions are dead from AIRPLANES, proving me right on suggesting my husband outlaw air travel in Kenya. This is a world stillborn to rot and ruin. This world is so corrupt.
Yours Always,
Lucy

REMINDER: Only 100 shopping days left until the reign of man ends on earth. I’ve got to do my shopping to prepare for the uncorking and pouring out of the seventh vial. STOCK UP ON DIADEMS.
- Lucy

TO: DIARY
RE: War of the Worlds
To Diary it May Concern,
I think the US of America is going to invade Afghanistan over that New York imbroglio. They keep showing these guys from that country called the Taliban on the news and one of them has a sweet eye patch. *PRETTY SERIOUS Q.T.* If he survives the invasion I will look into having him shipped here as my swarthy piratical manservant and I will name him Mercurio.
Thanks In Advance,
Mrs. Mercurio

10-16-2001
Quick note on Mercurio: I think he’s dead from bombs. If not dead then at least rendered useless for the purposes I had intended him. President of America Bush isn’t so bad though, he’s got a nice smile and I can imagine riding him through the midnight clouds like a broomstick. I bet he has really strong hands from working on things in Texas like adobe huts and catapults. I just have to keep reminding myself that anyone can wear a dashing black turban and eyepatch.
Love,
Lucy 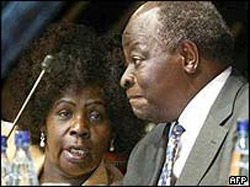 The ethnic slaughter in nearby Sudan can mean only one thing: Halloween is here! I convinced Mwai to let me hold an official government Monster Mash here in Kenya City. He doesn’t like my mandatory parties but I don’t like the way he puts his penis in other women so we both compromised. I won’t drive over his manhood with my Mercedes and he won’t stand in the way of my good time.
I’m going as the Wife of Frankenstein!
Happy Spooky Halloween My Dear Diary!
Muhahahaha is going to be there too!
Peace out Diary!

Sorry it has been a long time since I have written in you diary but your screams as I set ink to your tender papers were disheartening me in my efforts. Right now I am very drunk because of the party we had to celebrate the end of yet another terrible year in our nation’s tragic history of corruption and violence. Back before we recorded our history in blasphemous tablets of untold horrors such as yourself we were a very peaceful people. We lived in huts and burrows and came out to eat the delicious animals that grazed the wild grasslands of Kenya. Then the corrupting influences of the West came from the sky in the form of a Coca Cola bottle and though a noble tribesman attempted to throw the bottle off the end of the earth he ultimately failed because nothing can stand in the way of the nefarious octopus of capitalism. Back then we didn’t even know what an octopus was because our people did not know what water was either because we lived off blood and the sun. We were so pure. Now we are all fat, lazy, evil, and full of AIDS because of America and Coca Cola.
Delicious Coca Cola.
LucyLoo: TTFN Diary
*** User Has Closed Diary and Put Down Pen

Whoops! It’s just more bot flies in my hoo-ha. That’ll teach me to sleep on my head with my legs spread wide to the swarms of flies that gather on the bananas I stapled to the ceiling.

BRAINSTORM! “Bananas are good and good for you” can be the new health campaign here in Kenya and we can have that caption with a smiling face only the mouth of the face is a picture of my vagina with teeth in it. I mean different teeth like a smile not the ones that are just rattling around loose in there. Whoops, gotta go, my babies have an appointment with a boiled metal dentist’s hook.

Takumbe was rolling up his new character last night and he claimed he rolled four stats at 18. I need to make sure I watch him when he’s rolling up his characters (ANOTHER Barbarian with 18 base strength SURPRISE!!!) I was going to dramatically tear his character sheet in half but Andrew and J.R. we’re getting tired of waiting around and I was almost out of Sunkist so I just let him play with that.

Oh, also I imagined all this as part of a fever dream I had where I was a teenage white boy living in Michigan but I consider the line between dreams and reality so irrelevant that I recorded it as normal. Suck that one down you solipsist fucks.

Dr. Irvenghast’s machine has gone out of control and is generating the twisted freak-clones at an astounding rate. My ammunition is holding out for now but I am afraid SYKE! Haha, got you again, Diary! You’re so darn gullible. I could tell you that up was down and you would just sit there and let me scribe it indelibly across your thin leafy flesh. Grow a backbone it is very Un-Kenyan of you.
Sincerely,
Mixed Up in Upton

TIMECAPSULE FOR THE DAY:
I love: Mwai
I hate: Mwai’s girlfriends
I like: toffee
I dislike: coffee

IN THE NEWS TODAY: Bats Bet Bank on Belgium, The Red Rampage Continues in Delta City, Watermelon Grows World’s Largest Boy, Hobbits Real Says Bible, New American Jet Can Go Faster Than Last New American Jet, Computers: Menace or Dennis?, Screendoor Removed From Polish Submarines and Now Crews Cannot Get Into Submarines. HOT MUSIC OF THE TIMES: “Buffaloo Ricky and the Dime Store Detective” by Britney Spears, “JESUS WEPT” by Creed, “50 Ways to Leave Your Lava” by Buffaloo Ricky, “Just Go Out the Back Jack” by No Need to Be Coy Roy, “Just Hop on the Bus Gus” by Don’t Make a Fuss Muss, “Just Hop Into Pans Stans” by H.H. Howling Mad Horatio, and “The Star Spangled Banners” by American President Bush.

That is all for this time capsule Diary. We may never meet again because I am burying this inside concrete for future generations and I probably won’t be allowed to be a part of future generations because of INOPERABLE CANCERS. Thanks to their feudin’ and fightin’ with doctors I’ll probably be dust in the wind when you are unveiled to the public in 3,800 AD. I just pray that mankind has the descency to wait to blow up the planet until 3,801.
Adieu, adieu, to you, just you, just you.
HERE THE UNDERSIGNED
Lucy

That's where the diary ends. There was a good deal of dirt in the pages so I assume at that point she buried it with little or no protection from the elements. I hope you have enjoyed this amazing journey through the private thoughts of Lucy Kibaki. I think the better we understand the people in power in various African nations the better we understand ourselves. Especially if we happen to be people in power in various African nations.