Check out this "bad ass" calendar of events! It's totally rad!

Looking at my calendar here I note two things; that Christmas is fast approaching and that we haven't taken the time to celebrate Scientology on Something Awful lately. This odd alignment of the stars got me to thinking, if Scientology is an actual religion then they probably have their own Holidays, and since I am a huge fan of L. Ron Hubbard I really needed to make it my business to know about them. So I called up my local Church of Scientology, which also happens to be the basement apartment of this guy named Cliff who lives with his widowed mother. Cliff told me that there are several Holidays, including one which supplants and somewhat resembles Christmas. He explained to me how these holidays are celebrated and gave me the dates so that I might enjoy them in the comfort of my own home. Then he just started trying to get me to come over to his basement and sleep on a bunk bed with him (he said I could have the top) and that I needed to bring a valise full of all my liquid assets.

That's how Scientologists operate. They are like really pushy and persistent vampires, who constantly try to infect people with their special brand of cash vampirism. Sites like "Operation: Clambake" and news groups like "alt.religion.scientology" are the Van Helsing to Scientology's Dracula. And L. Ron Hubbard was like those two hot vampire women who were getting all sexy with Keanu Reeves and then Dracula came in and fed them a baby. And Dracula is Xenu, I think. Shit, I've confused myself again.

Since I know a lot of you are avid fans of Scientology and the completely rational beliefs that it includes, I figured I should share the wealth. There may be more Holidays that Cliff didn't tell me about during his harangue about the bunk beds, he might not even know about them since he's only a level 45 Fighter/Body Thetan Remover. 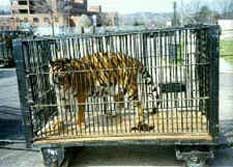 Minutes before the fun begins!Coming on the same date as the Roman New Year, the Scientologicalistical New Year is celebrated much differently. Festivities are held at ever Church of Scientology facility, including stringing up flashing lights and placing refrigerator magnets of L. Ron Hubbard axioms on every metal surface. A caged and starved tiger is brought in (if the facility is small or poor a caged and starved dog will be used in the tiger's place) and forced to watch the Scientologists devour pounds of red meat, often including live human babies. Worked nearly into a frenzy the tiger is then released in the facility to chase the Scientologists through the halls trying to get at the fresh baby meat buried in their soft bellies. These "running of the tiger" events often result in at least one fatality and a number of serious injuries from tiger maulings and gout induced by the richness of infant meat.

The lord and master and two ton disaster of Scientology Xenu is congratulated for being such an incredible alien overlord on the 18th of February every year. Scientologists everywhere join together singing songs of praise such as "We Love You Deeply, Xenu" and "Xenu, bitch up in this shit, yo, rockin' the mike East SIDDDAHZ got the hot ish!" which is a lovely choral piece. At the end of the night the Scientologists practice their breakdancing moves on mats made from consecrated cardboard while a life-size holographic projection of the guy from the "Fat Boys" who died be-boxes. The person who is the best breakdancer is declared "Clear" and given a plane ticket to Easter Island, which is where the fun really starts.

Hubbardonians believe that the reaction to stress of clenching your jaw only seen in movies with cowboys and Bruce Willis is actually because we used to be clams and now we remember it or something. When I was a clam I was a clam DJ and I would spin crazy beats at the House of Clam, I had everything; money, women, and power. Now look at me, I'm a worthless human shitball writing for a web site with none of the three mentioned qualities. But I digress! "Clamtastrophe!" is one of the biggest Holidays of the Scientomonomistimy year and it attracts people from across the globe to Scientology's underground inner sanctum in the mountains of Peru. In the blood pits where the infant cadavers are drained for kosher Scientology meals a lucky few get to romp in a crimson drenched bacchanal of sex and violence. The rest of those attending will watch from the big screens and participate in a number of baby-themed games and merry-making. Just imagine those posters abortion protesters put up of a dead fetus, that's what the plates look like at the dinners, only with some red potatoes and a white sauce. 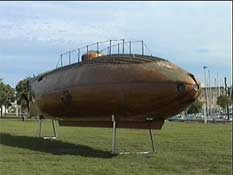 1998's wooden sub made it to a record depth of 97 feet.In 1967 L. Ron Hubbard was leading a mission of Sea Org to test the first Scientology submarine, the LRH Thetan Seeker, when things went disastrously wrong. The sub began to leak terribly, possibly due to Thetans infesting its instrumentation and E-Meter sonar system. In a few short minutes the entire aft section was completely flooded and the sub had settled to the ocean bed, some 900 feet below the waters surface. Over the radio trapped sailors could be heard screaming for help. Rescue operations led by Hubbard failed completely as the explosive charges he had hoped would blast the sub to the surface actually just blew it in half and killed the survivors of the initial disaster.

Since 1968 June 4th, the date of the sinking, has been celebrated as a holiday with in the church of Scientology. A submarine made from wood will be filled to the brim with Scientologists who have failed to meet payment requirements or who have otherwise committed thought crimes. Huge lead weights are then attached to the bottom of the sub and it sinks quickly. For added fun the Scientologists onboard several yachts on the surface place bets on what depth the sub will finally implode at. The winner gets to butcher and eat the families of those sent to the bottom.

Submarines and clams aren't the only relationship with the sea that Scientology has. Level 3 and above member of the church begin to undergo a bodily transformation into something not quite human. This being, which achieves maturity around Level 9 (after you kill Zorgar in the Snake Bite mountains and get his magic broom handle +5), closely resembles a giant lobster. These advanced scientologists can be disguised as normal human beings using strange technologies given to the church in a dark alliance with Xenu. On the 31st of October, the night when fiends of all manner stalk the night, the Scientologists cast off their disguises and walk openly as giant lobster creatures. Since they are so large they require an incredible amount of meat to sustain their life. Can you guess where the meat comes from? Here's a hint; it rhymes with "maybes".

While this holiday sounds sinister, it actually isn't, since the Scientologists kill each other instead of innocent people in a complicated series of clandestine strikes. The leadership of the church will frequently change during this night. There really isn't any real reason for all this to happen, just the usual noble greed that motivates the church once again gripping its members with an unquenchable lust for money (and babies). 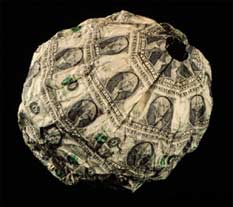 This is the first incarnation of the money sphere. It was this size for about five seconds. Now it's nearly as big as the moon.

It's pretty well known that Scientology rakes in ridiculous amounts of cash, but where does it all go? To the giant floating orb of money (and pain) of course! It is an-ever growing sphere composed of cash that spins at the exact center of the earth, accessible only by advanced Scientologist Thetan projection technology. The Scientologists give praise to this floating ball of money and with a blinding flash and the slightest smell of frying bacon, they transport their money into the orb. Many of them work a day job just to earn money to give to the floating orb, when they give money they receive the best wishes of the orb, often printed on a piece of blue paper that says "THANKS FOR YOUR MONEY JERKWAD."

Now I know how to spend a few more days of each year instead of just shaking in the darkness hoping for a merciful God to come and claim my life. Thanks for restoring meaning to me Scientology, you are the glue that binds together my shattered dreams!

Incredible dreamboat Dante Passera has completed his third and longest Kitty and Fatty cartoon! It's really something, uh... well, it's something! Check it out! 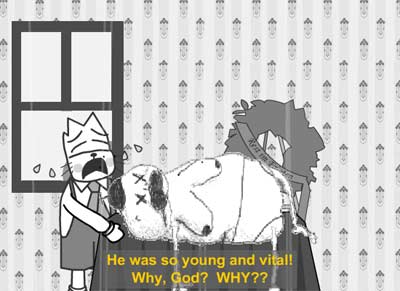 It features dancing elves, Nazis, death, and rebirth. Who could ask for more?