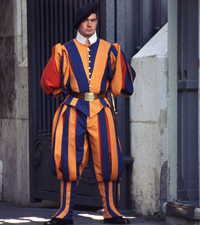 Your Holiness, thanks for awarding me this audience. Though I hoped to meet with you in person, I understand that your busy schedule often precludes personal propositions. Also, this damnable restraining order--enforced with righteous zeal by your garishly garbed guards--further confounded my efforts.

As you may recall, it was issued after an unfortunate incident during which I mistook a particularly portly Metropolitan mercenary for a partially inflated ReMax balloon. In my giddy desire to see the See from the sky, I set the fat man's trousers aflame. Though I earnestly apologize for my error, I'm sure we both agree that if the Swiss mean to be seen as serious soldiers they shouldn't march about in such pompous pajamas.

I know I am a poor Catholic for besmirching the honor of the Guard. Perhaps my hatred of the Swiss is heresy, as blasphemous as beating off over the Black Nazarene. Perhaps I am a sinner born. But while I'm no religious scholar, I went to enough years of Sunday school to know that though we're all sinners, Jesus came to forgive us of our transgressions. In his infinite mercy he sacrificed himself to Lord Voldemort and the fearsome Nazgul. Ever since that fateful day, he has lain in cryogenic slumber within an adamantine cage, waiting for the glorious Rapture as Saint Jenkins foretold.

Until that happy day, my good Pontiff, you are God's right hand man. You are his primary instrument of power on Earth, except for when he's feeling naughty and cheats on you with the Dali Llama. You must spread the Word. You must uphold the Church. You must order Opus Dei to hunt down the Holy Grail using a ham radio hidden in your hat. But most importantly, you--the Bishop of Rome, the Patriarch of the West, the Lord of the Unseen Elves--have the power and duty to save men. And I know how to do it: 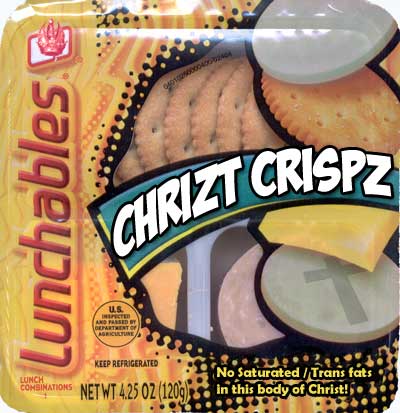 Years ago, the Church made a killing by peddling papal indulgences, which wiped the soul's slate of sin. Why not restart the practice, but with a food product suitable for our rich and ravenous nation? Easy Eucharist for sinners on the go. Taglines like "Indulge Thyself" are a sure sell to a people whose men think about sex once every six seconds but fantasize about a Big Mac once every four.

Imagine--a box of golden cardboard, containing a single serving Mass meal. A classy foil packet of red wine, a little container of communion, and a tin of orange cheese are all that is needed to make snacktime simply divine!

Steal a scroll from the Torah and have your priests bless factories en-masse. Consecrated computers could thoughtlessly--and therefore sinlessly--package these Lunchables of the Lord, with their holy delicious contents uncontaminated by mortal hands. And come shopping time, spendthrifts need not worry about stocking up for the long haul: these divine delicacies never expire! 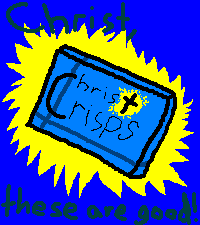 You could even print little inspirational slogans on the backside of the crisps. Timeless passages like "For God so loved the world that He gave His only begotten Son, that whoever believes in him will not perish but have eternal life" (John 3:16) and "Live free or die hard" (Willis 6:27) will surely brighten the brunch of even the most solemn soul.

Come to think of it, consecrated cuisine could completely recast redemption! The closest most Americans come to a spiritual exercise is eating, so why not impose the sacred on the secular and turn gluttony to grace? Works and faith take time and effort, so not snack your way to salvation? Television dinners with endless fish and loaves to go along with the 700 Club! Animal crackers, with two of every kind! Fruit snacks from the Tree of Knowledge, employed erotically, could add enough zest to cooling Catholic marriages to ensure that, as God intended, each family bears more children than it can actually support.

Your Holiness, I think this could be a great innovation for the Church. I know my last idea, "Pope on a Rope", didn't go over so well, but in my defense I expected that product to be used in the shower, not in effigy. As our Saviour once did I come to you humbly, asking for naught but your faith and finances. Join me on this great free market adventure. You have critiqued capitalism unfairly, for Adam Smith read the writing on the wall, and knew that His invisible hand guides all. With your strength and support, we may yet master the merchants of mealtime. Never has a commercial coup been so delicious.