Yo Momma So Unspeakable or: H.P. Lovecraft Plays the Dozens 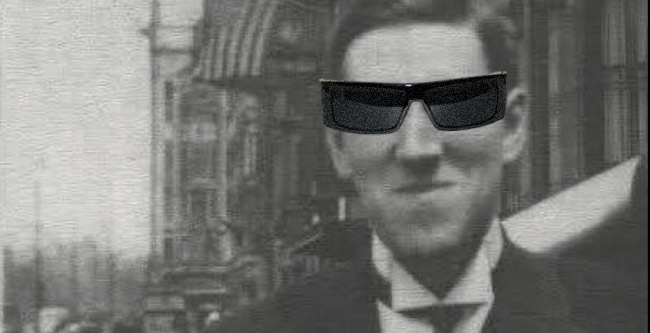 Yo momma so nasty, though ten nights have passed in this cell, I cannot even begin to describe the loathsomeness of her unearthly visage. Go! Do not dare ask me more or you will condemn yourself to this same madness!

Yo momma so ugly, my fulminant disorder of the mind was aroused upon glimpsing her through that cursed mirror for only an instant as she moved amongst the ancient stones on that lifeless heath of Leng.

Yo momma so fat, so manifold of flesh, so utterly depraved in her desire to consume that meal of pizzas and burgers, of fried Kentucky which I dare not detail, that slaw of cole and family sized bucket, no... to speak more is to invite total madness.

Yo momma smell so bad, her essential saltes got biohazard on their urns. Talking about conjuring up her gauzy apparition lit from within by malevolent vapors, though she insubstantial, she still got them stink lines.

Yo momma so black, even the diabolical Mi-Go, The Abominable Ones descended to our planet from the lightless cities of Yuggoth, whose fungal rhythms require no light or warmth, would lapse into a state of confusion in this sucking void of illumination, this ur-negress of truer black than even the trackless depths.

Yo momma so white, the colour from outer space hit her up and she look like a Pantone wheel.

Yo momma so poor, she tried to call Yog-Sothoth by sacrificing two fingers and an EBT card.

Yo momma so ugly, she is nine feet in length, three and nine-sixteenths central diameters, tapering to the nappiest weave that is not fooling anybody on one end and some two-sizes-too-small cheetah pumps look like pizza dough is falling out of a pair of leggings. She has five bulging ridges in place of staves. Lateral breakages, as of thinnish stalks, one titty bigger than the other, one eye going off in the other direction like she trying to look behind her and the other all scrunched up and pink. Flared combs of bright orange on either side of her neck that spread out like fans... which gives almost seven-foot wing spread. Arrangement reminds one of certain nasty hos I went insane reading about in the Necronomicon.

Yo momma mouth so big, she put down "Gug" as her race on the census.

Yo momma so dirty, she said "Hastur" and he walked in robed in scolloped tatters and spraying Febreze. She was like, "Unmask yourself," and he was like, "Bitch, I am not taking this mask off, your stanky ass will straight murder me. Turn me into the King in Brown." He disappeared in the bathroom for ten minutes, flush a toilet, and the house smelled better. Smelled like Carcosa.

Yo momma so nasty, she is a shapeless congeries of inhuman appendages and organs of no obvious purpose, her myriad eyes forming and unforming as she heaves her formless bulk across the threshold. I cry out for Carter to shoot her as she bears indefatigably down upon us. Damn you, man. Shoot her! But our bullets are wholly ineffective against one such as yo momma.