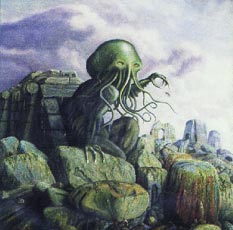 If Lovecraft could have gotten away with schoolgirl tentacle rapes I'm fairly certain this would have been a major theme in his work.Rich notified me last weekend that this was to be "Haunted Horror Week", or "Shocktacular Spook Fest", or something equally retarded here at Something Awful. I scrapped my carefully prepared plans to write an update about German Tanks of the Second World War and why I masturbate to them, and put together an ultra creepy article about sea monsters. I'm sure R-Lo would have covered the sea monsters but that guy wet his pants when he saw "Jaws" and even the foam monster in cinema masterpiece "Deep Star Six" scared the shit out of him. Bitch as I may about being a coward, I am made of much sterner stuff.

That's why I am going to forge ahead with Lowtax's recently abandoned theme week here at SA and talk to you about the work of horror writer H.P. Lovecraft. I've made fun of good old Lovecraft in the past, but I kid because I love. He may be overly dramatic, cryptic, and a god awful poet, but his works of cosmic horror have helped shape the work of horror writers as diverse as Stephen King, Clive Barker, and Judy Blume.

Lovecraft's greatest creation was what became later known as "the Cthulhu mythos". While smoking opium or myrrh, or whatever the hell people got wasted on in the 1920s and 1930s, Lovecraft cooked up this pantheon of supernatural monstrosities. They filled the roles of the gods of most polytheistic mythologies; the only difference was that they went from being "mean and playful" to "horribly evil, insane, and bent on destroying reality". Chief among these gods were such charmers as Cthulhu, Nyarlathotep, Shub-Niggurath, Azathoth, and Dagon. There were also a bunch of lesser beasts, some of whom served these dark gods, others who battled against them while simultaneously fucking humanity over just as bad as the gods themselves. 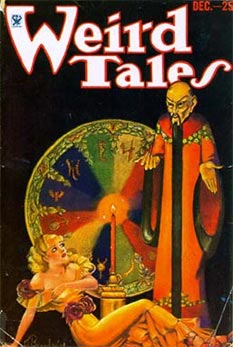 Still don't believe me about that tentacle rape stuff? This was one of the magazines Lovecraft wrote for in his day. Logic your way out of that one shithead.Much like King, Lovecraft's panties were wet for the decaying culture of New England, particularly Rhode Island. Lovecraft created several fictional locations, but my favorite has always been Innsmouth, Massachusetts. Innsmouth was literally a breeding ground for these ocean-going bipedal monsters called the "deep ones". Somewhere in the distant past the people of the small coastal town took it upon themselves to hook up with some of the more attractive deep ones, probably at an especially debauched VFW mixer. A few bottles of champagne, a sass foxtrot, and a night of passion with something that you would try to scrape off the bottom of your shoe, and the gene pool there became polluted with the slimy abyssal DNA of the deep ones. Thereafter when members of certain families within the town reached a certain age they would fall ill, only to begin to grow gills and eventually leave the city life behind to frolic with their ancestors in the aquatic grottos of Innsmouth bay.

Most of this was covered in the short story "The Shadow over Innsmouth", which was a beautiful romantic masterpiece.

Like some sort of hackneyed literary werewolf caught in the metamorphosis of the full moon, Halloween tends to bring out the darker side of my writing. This, coupled with my enjoyment of Lovecraft, has led me to create a short piece of fiction based on the works of this master. Mix in a little bit of the "paranormal hysteria" I've been exposed to while researching Awful Links of the Day, and you've got a really bad piece of parody that makes me ashamed I wrote it. Nevertheless, it's too late to turn back and work on that article about jerking off to German tanks, so I present to you:

The Insanity of Shadow Bay

What became of Carter I may never know, for other than two steamer trunks full of pornographic daguerreotypes and a carry sack full of his foulest humors, nothing remains of the man. I had met him in my carefree youth. We were both freshman students attending the Miskatonic University in Essex County, when we bonded quickly over our fascination with the antiquarian. The finest town for people inclined such as we is most definitely Providence, and it was there that we spent many a weekend furlough, strolling the crumbling tenements of times forgotten. It was there that I believe he began his descent into madness, and it was there that a quaint and slightly offensive encounter occurred that speaks of my anachronistic racial stereotypes.

Carter and I were in Providence for the spring break and we were, as usual, wandering about the slums of a city avoided by most of our well-mannered contemporaries. In the negro district we happened upon a strange shop, where a dark-skinned man with odd eyes was selling curios and trinkets gathered from across the globe. I was fascinated by the voodoo dolls of Haiti, but Carter took an interest in an odd stone that the shopkeeper claimed had been recovered from a shipwrecked rum smuggler. It was oddly angled and red-veined, difficult to look upon so strange was its geometry.

The stone gave me quite the headache and while Carter was negotiating with the negro I became enraptured by several pieces of statuary from the South Seas. They were very detailed, featuring phalluses that stretched from groin to eyebrow, and I considered purchasing one to place atop my mantle back at the University. Carter purchased his stone and when he found me inspecting such idols he made a most rude comment that nearly forced me into fisticuffs with him.

When we returned to the dormitories Carter was quite fond of his strange rock. As the days turned into weeks I began to worry about him, as he was always mumbling under his breath and spending goodly portions of the day and night locked within his bedchamber perusing rare texts. What these manuscripts contained I cannot be sure, but whatever it was it compelled him to take another trip at the end of semester. On this occasion it was to the small rural community of Shadow Bay along the Rhode Island coastline.

Despite his reluctance and further comments that made reference to the statues I had been looking upon so fondly, he allowed me to join him. He insisted we sleep in separate rooms and told me he would bed upon his back most certainly. Both of these comments led me to infer that he was beginning to keep things from me, that perhaps he had some occult agenda of which I could only suspect.

The very next day I burst into his room at dawn to find him sopping wet, as though he had been cavorting in a tributary of Shadow Bay. He smelled quite nicely if I recall, of strange incense and oils from the forbidden East. Carter seemed very distraught that I had interrupted his unusual activities and began spluttering and demanding an explanation. I demanded the same and he called me a scoundrel in a manner that suggested he was hiding something.

The journey to Shadow Bay was made in almost complete silence. Carter motored us in his father's automobile, brooding about the odd discovery I had made about his behavior. He inspected the coastline for hours, saying very little to me during this time, while I took out my pocket knife and began to carve crude effigies of myself and Carter into a piece of driftwood. I believe it was an eldritch vapor, given off by Shadow Bay itself, which compelled me to do this. When I was completed I was horrified to discover the graphic and blasphemous nature of the images I had cut into the wood. I tossed it into the bay before Carter could see it.

We returned to the University where Carter's mental health rapidly declined over the summer break. He frequently told me to stop coming to his room and to stop peering into his window and groaning at night. So bottomless was his madness that he even threatened to notify the local constabulary about my activities, not realizing that all of my actions were undertaken in his best interests.

At last there was a complete breakdown. Fearing the worst I crept into his bedchamber one night and discovered the journal he was keeping. Feeling some guilt I paged through it beneath the shuddering gaslight and to my horror found my own name written in Carter's workman scrawl.

"I fear that Jameson fancies me in an unnatural way."

My suspicions confirmed, I resolved to take action immediately. I returned the journal to its place and moved silently back into his bedchamber. There I threw back the cover and leapt atop him, stifling him with my hand before he could cry out. I warned him not to act upon his bizarre schemes and then I fear the vapors of Shadow Bay, somehow clinging to that blasted stone, overwhelmed me. I do not remember what transpired.

The next morn I awoke to find my body battered with bruises and my clothing disheveled in an unseemly way. Carter was gone, but I discovered he had made good on his promise to contact the constabulary. They arrested me within the fortnight, expelling me from the college and leaving me only with the trunks full of photos I had taken through Carter's window and the fluid specimens I had collected on my few daring raids into his sleeping jacket.

There are some places, some secrets, that man was never intended to explore. I believe that Carter had attempted to defy the powers beyond comprehension and unlock the secrets of the Great Old Ones. Instead of knowledge or power, he found only madness, and I have lost a true friend.

Man, I regret writing that a lot. In any event, if you are somehow still interested in the work I so poorly satirized, you can check out HP Lovecraft at pretty much any book store. I heartily recommend his novella "At the Mountains of Madness", upon which the movie "The Thing" (particularly John Carpenter's version) was loosely based. If you did like my story for some horrifying reason, then I suggest you look into the band "The Darkest of the Hillside Thickets". They are heavy into HP Lovecraft and their upbeat yet twisted surf punk work features such tongue-in-cheek Lovecraft tributes as "Shoggoths Away", "The Innsmouth Look", and "Yig Snake Daddy."