Welcome To The Danger Zone

Upon reading in yesterday's update by Zack "GeistEditor" Parsons that Lowtax had fallen down the stairs, I sprinted to the batphone to check up on his supposedly incapacitated condition. Well, that might not be quite right. Replace "batphone" with "Lowtax's apartment,"and "check up on his condition" with "steal his car," but the spirit is the same. To my dismay I found that Lowtax was, in fact, in perfect health, although that description can only be used loosely when describing someone whose daily diet contains more fatty acids than a stadium full of Crisco. In any event, I found that Zack's reports of Lowtax's injuries may not have been entirely accurate, although in his defense I will note that the online newspaper he runs has always been very careful and scrupulous in checking that their bald-faced lies do not directly contradict one another within the same article.

This led me to wonder why, when dreaming up possible scenarios where Lowtax hurts himself, one would use an idea that also involved Lowtax making a fool out of himself as well. After all, the man has given us free entertainment for well over a year, and in return has asked only for our money and personal belongings! Can't we at least try to maintain his dignity instead of endlessly mocking him? To that end I drew up a few future situations where Lowtax might suffer a fictitious injury, but instead of drawing our ire he could draw our respect or even admiration:

After all, if we're going to make up lies, we can at least make up nice lies. Doesn't the man deserve as much? Well, probably not, but he did catch me stealing his car so I'm trying to make friendly here. 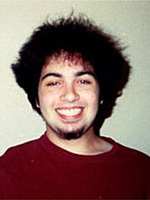 Andrew Stine, before the haircut

I went to get a haircut today. Before you start wondering why I'm mentioning this, let me add that this isn't some sort of life-shattering occasion for me. It's not like I'm Brad Pitt circa 1992 or John Romero or Samson or one of those other guys who spend 14 hours a day massaging essential oils into their scalp with an end goal of achieving a beautiful flowing mane which will billow in the wind and cascade invitingly over square, rugged shoulders and eventually get caught in a washing machine and rip off the owner's entire scalp and leave them a screaming, blubbering, skinless mess like Kevin Bacon in "The Hollow Man" just after he got the invisible potion injected into him without having an opportunity to gratuitously display his wang. I generally like my hair short, although lately it had been piling up as week after week passes by, eventually growing long enough to make visions of skinless-Kevin-Bacon-washing-machine-doom appear to me seven or eight times a day, which is about two more times than normal.

So I went to the local barbershop, which actually is a real barbershop called "Rusty's Barbershop" instead of something trendy like "Le Boutique de Quelquefois Fromage." Since this outpost of unbridled barbering masculinity has remained untainted by the influence of manicurists and those giant hair-drying chairs that look like 1960's brain transferal devices, it's frequented by a clientele made up of guys for whom a "haircut" involves nothing more than "cutting hair." This translates into lots of manual laborers, old men who remember when a shave and a haircut was two bits, and fathers with their small sons.

When I was a little boy, the experience of a haircut was something which I viewed with only slightly less displeasure than dentist visits or hernia inspections. When you're a little kid, being asked to sit perfectly still while a strange man with a straight razor and scissors longer than your forearm waves his instruments of death two inches from your brain is less than a pleasant thought. In a way, it was one of those rites of passage that we are all expected to endure. Who the hell wants their hairstyle determined by a big metal bowl? Who wants to finish getting a haircut, only to have their mom make the barber sit them back down and hack some more off? Nobody, that's who; but we endured it anyway, and our characters are stronger for it. Which is to say, I might pick my nose more and download even more Internet porn if I never had to go through it.

One of the main aspects of barbershop torture that little kids had to endure was the waiting. While barbershops had chairs or couches to wait on, there was nothing to pass the time with except magazines, which invariably consisted of some dog-eared copies of The New Yorker and Vogue and Dirtbike Maintainers Quarterly from 1863. Sometimes there would be a Sports Illustrated or a Rolling Stone with some halfway interesting stuff in it, but more often than not we would have a 30-minute wait where with nothing better to do than read all the warning labels on cigarette advertisements and glance around the shop trying to figure out what sort of vile-looking fluid was in each glass jar. It taught us patience and the art of silent suffering, something which would serve us well in the future when dealing with the government or women in general.

Today while waiting in the barbershop, I figured that the small children would be undergoing the same maturation process that I once had to endure in my youth. But instead of seeing the kids sitting on a hard wicker bench with a vacant, slack-jawed stare that would one day encompass much of their daily existence, I saw them in front of a big-screen projection TV in the corner of the shop, playing a racing game on a Playstation.

I was appalled. Is this what is happening to our nation's future? Are we not offering our children enough opportunities to learn the true nature of the boring, disappointing sham we call real life? What will our country be like in forty years, when today's little kids -- weaned on a life of Playstations in every waiting room, "Pokemon" on every television, and clean, danger-free schools -- begin to attain positions of power? What sort of freakish, alternate-universe world will result? And more importantly, will it be fashionable for old men to have long hair, because I don't think that in half a decade my aging heart would be able to take more freakish premonitions of scalpless, wangless Kevin Bacons.