The Oscars and Lowtax's Missing Head

Welcome to the Bottom of the Steps

In a tragedy normally played out only on shows like Real Stories of the Highway Patrol, Cops and When Good Pets Go Bad, Lowtax has fallen down a flight of stairs. This would not be note worthy except for the fact that there were only three (3) steps and he managed to injure his back. I guess it beats throwing your back out biting into a donut. The problem, and the reason I am here, arises from the way Lowtax hunches over his computer like a 1940's sports reporter. He is temporarily incapable of doing this, but I expect a swift recovery. 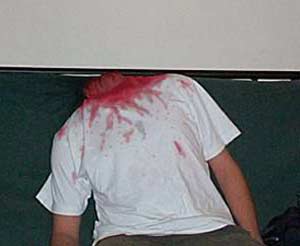 Lowtax assures me that he will be at full strength tomorrow and bearing nuggets of joy to warm the hearts of the most adorable tykes on the forum calling me a moron.

All Your Ocscar Belong to - Just Kill Me Now

The film industry came out in style Sunday night at the 73rd annual Oscars, an event that shouldn't be missed for any reason at all. Did you see all the pretty dresses? There were a lot! They looked expensive.

Hi, my name is Zack and I want to face punch the Oscars.

Bitch all you want about the movies nominated. Cry me a river for the fact that your favorite song lost out to Bob Dylan sounding like a Japanese man doing a Bruce Springsteen impression. The real travesty is the event. In typical uncreative fashion I am going to start my own annual awards and present awards to the awards ceremony.

Winner is you, Russell Crowe! Looking like five miles of bad dough, Russell Crowe took the stage to offer up a touching speech about overcoming adversity to steal Dennis Quaid's wife. His shaken demeanor might have been because a man with a giant head sitting directly behind him embraced him when he was announced as the winner for best actor and also slammed him in the face with his Peanuts-character sized noggin. Congratulations Russell!

Winner is you, Stupid Ninjas Dancing Around! When I think of the wonderful movie Crouching Tiger, Hidden Dragon, I think of idiotic dance routines that involve wire cables. Wait, actually I do and I was just thwarted by my own attempt at sarcasm. Nevertheless Stupid Ninja Dancing Around, you took the cake as the pretty Asian woman did her little song on her podium. Bring the cake back or you are going to the jail!

Winner is you, Steve Martin! Just when you though you read about him dying in a car accident three years ago, Steve Martin shows up to host the 73rd annual Oscars. With jokes that made David Letterman's hosting gig look like comedic genius Michael Winslow trying to convince a gang of thugs that there are police helicopters outside, Steve still managed to do a better job than Billy Crystal. Maybe Billy died in a car accident three years ago. Good work Steve!

Winner is you, Ultimate Piece of Human Trash! The most coveted of the Oscar Awards Awards I am giving out, the honorary lifetime achievement in the field of bottom feeding, goes to none other than Joan Rivers! While technically not a part of the Oscars production, this celebrity remora loiters outside waiting to ambush attendees with hard-hitting questions like "what are you wearing?" and "what were you thinking when you put that on?" She is keyed in to the American mainstream and she asks the questions we would all ask if presented with the opportunity to question celebrities and our brains suddenly stopped functioning. This one's for you Joan. Runner up: Melissa Rivers.

Hey Look! Cliff Yablonski Doesn't Care For Me Either!

I was fortunate enough to get the following email from everybody's favorite 600,000-year old man, Cliff Yablonski. Oh, what a lucky day!

hey shitface, I dont know who the fuck you are. I dont care you the fuck you are. youre just another punk wiseass like Richard. Ive updated my site with 4 pages of morons and braindead yahoos that I hate. post the news and tell all your idiot readers to stop mailing me already, goddammit.

He's just as wonderful as I always imagined he'd be! Please grace Mr. Yablonski's site and gaze upon the 24 new people he doesn't like!