Thursday, Jan 15, 2009 by The Marshmallow Fluff Advisory Board

A Message From Richard "Bull from TV's Night Court" Moll 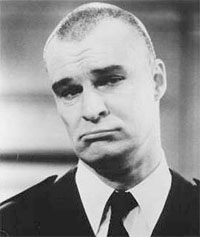 Richard "Bull from TV's Night Court" Moll, as seen 25 years ago.You know, when I'm not out cruising the waters of Key West in a little watercraft I like to call "The Moll Patrol," something far more important takes up just a few of my valuable twenty-two daily hours of free time: going to high schools and speaking out against the unpunished crime of tall discrimination. Listen, I'll tell you the same thing I tell enraptured crowds of sophomores at the Alonzo Mourning Learning Center: the height-abundanced among us may be freaks who fully deserve your scorn and derision, but it's also important to remember the curse that nature has bestowed upon we mutants provides us with a direct advantage in hurting you unmercifully.

I'll never forget those early days of Night Court, when the entire cast would take turns spraying me with a high-pressure fire hose while the rest of the crew was busy setting up shots and looking for expired items from the craft services table to throw at me. John Larroquette may have learned a near-deadly lesson on that fateful day back in '85 when I almost decapitated him with a spinning lariat, but many of our modern children are unaware of the rage induced in the tall when performing normal, daily activities that don't make you or your averaged-sized friends want to strangle the next busboy at Denny's who bumps his filthy cart into your elbow. Have you ever tried to direct a five-foot stream of urine into a typical public restroom urinal? My friends, the nickname of "piss-shins" is one that's hard to shake.

Wait, this is for Marshmallow Fluff? And you're the people who keep sending me boxes upon boxes of that delicious foodstuff? Well, I'll tell you what you can do with that Fluff, pal. You can stick it in your mouth and enjoy the euphoric delight of gulping down gooey gobs of America's fifth most-popular sugar-based sandwich spread. And you better not change a damned word of what I just said. Now get the hell out of here!

Marshmallow Fluff: Here to Stay for the New Millenium!

Many have said the world-famous Fluffernutter looks like a sandwich someone wiped their ass with before ejaculating into it. We prefer to think otherwise.You don't have take good ol' Bull's endorsement alone--after all, he's so freakishly tall that his brain is normally at an altitude where the unavailability of oxygen would undoubtedly affect his thought processes. The sad truth is that many see the much-misunderstood Fluff as a big, unused jar of mystery sitting--and perhaps, challenging them--from their wicked pantries. But how many of these people have cracked open said jars, cleared the top layer of the crusty green loam that seals in freshness, and smeared a fistful of God's spread on their waiting and willing tongues? Not many, I'd gather. For if just ten percent of you regular condiment-users switched to the FDA-approved goodness that is Marshmallow Fluff, our American rivers and streams would be littered with the abandoned jelly, jam, and preserves jars of people who suddenly discovered that they've been smearing nothing but lies and deception over their toast and sandwich meats since that whole "diabetes" hoax started in the mid-1920s. Join us!

Marshmallow Fluff: The Revolution Would Be Televised if We Could Afford Commercials!

No fitting tribute to Marshmallow Fluff would be complete without the story of this 100 year-old treat that rivals even the orphanage fire that spawned Screaming Micks (now known as "Atomic Fireballs"). At the turn of the century, most candy was the byproduct of the then-waning alchemy industry and featured a strong, sulfuric taste along with what some would call an unhealthy amount of lead. The purpose of candy at this unfortunate point in time was mainly to distract the consumer from the fact that the clouds of influenza and tuberculosis roaming the United States of America would inevitably destroy them and everyone they loved with an excruciating and incurable disease. But two men who had recently been prescribed three feet of black licorice for "The Gentleman's Virus," H. Allen Durkee and Fred L. Mower, stared across a dim opium den at each other over puddles of chunky, black sputum and realized there had to be a better way. So, they joined hands, and in an effort to combat the recent epidemic of muscular, non-obese children, combined a mixture of sugar, hoof shavings, radium, and beef tallow to come up with a delicious treat that "even a Jew couldn't pass up!"

This slogan was later changed in 1945.