You! Customer, Hear My Words!

A Gathering of the St. Louis Elite

E. C. Fouke, Acting President & Gen. Mgr.Let it be known that on a recent evening I saw fit to organize a gathering of the St. Louis Fur & Meat Magnates. I, by virtue of my stature, prominence, and renown in both fields, was of course the guest of honor. The other invitees included Mr. A. P. Brown of Brown Fur Amalgamated, and the notorious J. F. Swanton of Swanton Furs.

At the top of our agenda was the Fouke Meat Co's exit from the fur market, though a host of other topics were discussed. To cite the full itinerary of discourse would veer toward the prolix, so I mention only those issues which warranted the most heated discussion: Cousin Philip's health, the future of fur, and the vast, untapped potential of meat.

I found the two men, Cousin Philip's chief rivals, to be most fascinating. While Mr. Swanton was well known to me by action and legend, both of which flirted heavily with the grotesque, Mr. Brown represented an intriguing surprise. I found his opinions on the topic of my cousin to be quite enlightened, and it pleased me much to speak to one of the few living people not completely enraptured by the man.

I felt comfortable leaving the fur trade in his capable hands and vast menagerie of automated machines, of which he spoke of at great length. Unfortunately, while I respect Mr. Brown's opinions on my cousin and admire his thirst for industry, I cannot get past his effete appetite.

I am a man of voracious hunger, and have little respect for finicky eaters. Mr. Brown disappointed me greatly in the realm of consumption. Here was a man who gently nibbled at his biscuit as though it were some massive undertaking. He spent the eve conducting food about his plate as though it were an orchestra, rarely if ever transporting it to his mouth. Seeing an opportunity to further my own needs, I annexed his dish and made short work of the remains with little protest. 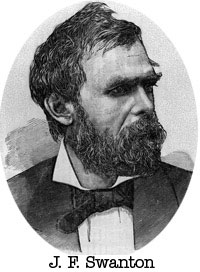 The perverted ne'er-do-well.Swanton, on the other hand, was a catastrophe. His hunger was known to the staff of this establishment, who served him what can only be described as a rotting carcass, scarcely cooked if at all, soaked in its own blood and wastes. Swanton, lacking utensils, dove into the beast with admirable gusto. Though he excels in determination, he lacks any semblance of discrimination. A man should have some dignity about what he puts in his mouth.

While I was impressed with the vigor Swanton demonstrated in eating, I was less than impressed by his dinner table manners. Not long after finishing his meal, Swanton began evacuating his bowels in the very seat in which he sat! He seemed to think there was nothing abnormal or wrong with his actions, which sent mouths agape and nostrils flaring. Swanton emptied the restaurant of patrons faster than even the most deadly of infernos could.

On no less than three occasions Swanton exhibited the peculiar trait of punching his own eyeballs, producing blood and puss, which he let trickle down his cheek so that he could suck it into his mouth. I have many bad things to say about Swanton, but can offer no criticism of his ample imagination.