Roleplay Your Way to Her Heart 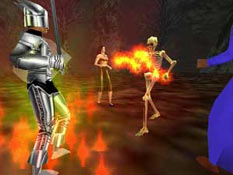 Things get a bit kinky on EverQuest, as a threesome develops when a Skeleton Princess offers to pay to watch.Romance has existed since the time of dinosaurs, when a male pterodactyl first ate the children of the nearest female in an effort to ensure its genetic dominance, and much like the winged pterodactyl became the polar bear of today, romance has evolved throughout the millennium. Even as the pterodactyl was losing its wings and growing hair, simple and primordial man was offering feces bound piles of sharp sticks to simple and primordial woman to try and woo her. Cave paintings of alien UFOs building the pyramids were the first easily recognizable courtship routine, works of art inspired by love. Fast forward past the love lynchings of the roaring 20s and the holocaust - this was all a big bid by Hitler to win over Eva Braun - and into the late eighties. There you'll find the first Internet romance.

It was a simple affair, a thirty-year-old agoraphobic shut-in sending e-mail on USAF computer networks to a Lieutenant Colonel who went by the BBS nickname "SexyChick". They courted entirely in the world of ASCII characters, and even though the romance fell apart when the Air Force Colonel's wife found out about his cross-dressing, it was a milestone.

We've come a long way from all that silliness, now we have Ultima Online, EverQuest, Asheron's Call, and most recently Diablo II to make our love connections. We can meet, fall in love, and get married, all without ever actually seeing another human being face to face. Folks, this is simply put, a wonderful time to be alive. There are a lot of ways to impress a woman now that just did not exist as little as six years ago, and that makes things extra easy on us guys, especially us ugly guys.

Despite what you may believe about me, at my core I am really a very nurturing spirit, I love people. So I have been carefully observing all of these MMORPG romances in the hopes of putting together some ideas to help you lonely game players some advice. At last the time has come for me to unveil these useful tips, and I can't help but think that many of you can use them to find love yourself.

Women love high fantasy, but what they don't love is overbearing sexuality, so when you make a character do not give him a name like "HardCock" or "JakethePumper". Instead choose your character's appearance very carefully. Women like rugged good looks, but they also like a well dressed man, so don't pick a barbarian. Some ladies might go for the exotic; lizard men, cat men, and shrimp men are all okay if you're willing to look a little harder, but trolls and ogres are out of the question. A name that awakens erotic fantasies in potential mates, but at the same time suggests virility, is the best course to choose when naming your character. I suggest one of the following; "Strong Lance", "Sure Shaft", "Erect Saber", "True Pole", and "Johnny Girth". 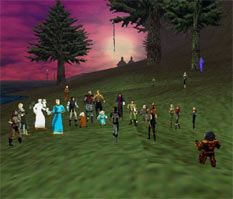 The Bouncing Hills are a great place to meet other singles just like you, only they're pretending to be women.When you first spawn in the game arena immediately shout "A/S/L?" or "Any Hot Single Ladies Out There?!". This will notify women throughout the area that you are looking to make a love connection and will also warn off potential rivals, letting them know that you are aggressive. Don't be put off if people tell you to shut up, they are simply jealous of your overwhelming charm. When a Game Master appears if they are a woman start asking her what she likes to do on a night out, be careful because elves require an added layer of subtly to win over. If the Game Master is a male apologize and wait until they are gone before you start shouting again. 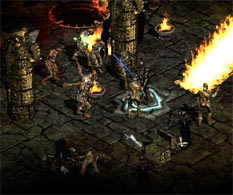 Throbbing Fastthrust tries to win over his lady friend by capturing the Amulet of Donkey Protection from the Hat Squad.This is where most of the work is done, so expect to spend quite a long time courting your prospective mate. There is no easy way to explain this process, but I've put together a few tips that might help you out.

If you've played your cards right, by now you are officially in love with that little half-elf vixen from the Forest Village. You've decided it's time to express your love to her in a more virtually physical manner, but you really want this first time to be special. Journey with her to a player kill zone and tell her to close her eyes. Once she tells you she's got them closed hit her with a stun spell or Blast Orb that knocks her on her back, then crouch and stand repeatedly over her groin while typing "ooh baby you feel so good". If she stands up while you're doing this hit her again with a spell or orb. Be sure to keep an eye on her health meter, nothing kills the moment like accidentally murdering her and having to help her look for her body.

You'll know the way to handle this first encounter, if you've been paying attention to her behavior you'll know if she's into the kinky stuff. Maybe she wants you to conjure pets to watch, or drop coins on her while you're doing it so she feels like a total slut. Just be sure to care for her needs. After you're done, give her some Blast Orbs so that she can stun you too and you can both lie together on the floor of the Player Kill Arena together. 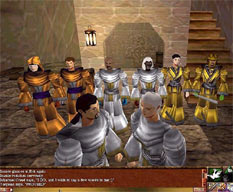 Moneyshot McMasters ties the knot with +So, you're ready to take that big step? Well, you've still got a lot of work cut out for you buddy. First you need to pop the question, and that means knowing exactly the right romantic moment to ask her if she's willing to spend her account life with you. My suggestion is immediately after you defeat a difficult spawn, like the Water Wendigo or the Cleveland Dragon Hammock. Crouching is an acceptable alternative to kneeling, so crouch in front of her and offer to trade a ring. Choose something nice, not too fancy but something that confers great stat bonuses so she'll be less likely to throw it in a lake when you're having a fight. If she says "yes" then it's time to start planning that big event. If she says "no" then you fucking dropped the ball somewhere along the way and you probably will need to create a new character and start over because now you look like a jackass.

Scout out the right location for a wedding. Some of the best spots are also spawn points for really powerful enemies, and the last thing you want is a Butter Banshee appearing and swallowing half of your wedding party. Waterfalls make a great set piece for a wedding, and since every online game contains at least one waterfall every twenty steps you shouldn't have too much trouble finding a great romantic spot to tie the knot. Invitations! Be sure to invite only people that both of you are friendly with; don't ask your guild mates to come if they screwed your wife-to-be over on a trade for a magical hat or something.

Anyone can perform the ceremony because in every MMORPG every single player is an ordained minister or a ship captain. Sometimes though, for that spectacular touch, it's nice to find a Game Master to conduct the wedding. That way you can have a Plague Pixie is a ring bearer and when you kiss they can make a Frost Dragon fly overhead and drop ice gems on everyone. It really adds up to make it all a really special occasion.

From there it's all in your hands you frigging stud. Just remember to tell your kids all about how you met their mother, and by "kids" I naturally mean Wolf Spirits that you conjured from the stones when you reached 99th level.