There are more films out this week than we know what to do with, so everyone is doubling up just to manage it all! Martin R. "Vargo" Schneider tackles the triple threat of The Butler, Fruitvale Station and Blue Jasmine; Joseph "Jay Dub" Wade reviews Jobs and Paranoia; Sean "Keanu Grieves" Hanson takes a look at The Conspiracy and Magic Magic; and finally, Ian "Professor Clumsy" Maddison takes one for the team and tells us all about the deplorable racism in Disney's Planes.

EXPECTATIONS: Well, what a grandiloquent time at the moving pictures this will be! That Edwin McKim can write a real humdinger of a scenario, and that Davy Don, well, he's a dapper dandy! So hail us a jitney carriage, Mrs. True, and let us exit ourselves to the cinema!

Oh, I'm sorry, you mean this ISN'T the 1916 silent short film? Oh, this is Lee Daniels' The Butler. Gosh, I must have gotten them confused, thereby justifying one of the biggest legal dick moves in Hollywood history. Well, that was embarrassing. So, is this going to be a talkie, or what?

REALITY: It's easy to be cynical when it comes to films about racism. They're almost always either guilt-repairing drivel like The Help, where a pretty white person learns that Black people are people and helps them by being pretty and white, or they're embarrassing oversimplifications like Crash. LEE DANIELS' The Butler spans dangerously wide in both those directions, but it's somewhat redeemed by its heartfelt nature and interesting, if not fully realized, ideas. 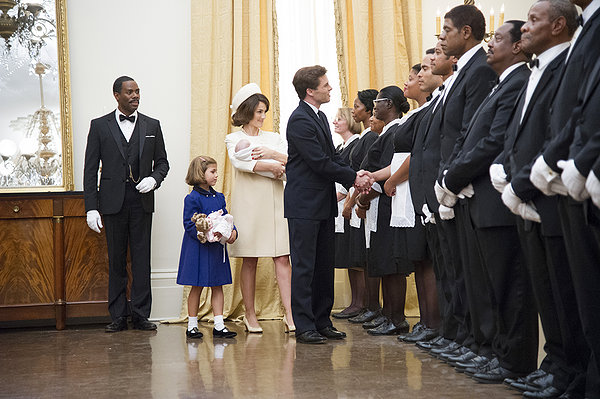 Everyone remembers the day they met James Marsden.

LEE DANIELS' The Butler tells the true-life story of Cecil Gaines (Forest Whitaker), the White House butler who served every president from Eisenhower (Robin Wiliams) to Reagan (Alan Rickman). As Cecil spends his days and nights tending to the First Family, his own family starts to feel the effects. His wife Gloria (Oprah Winfrey) takes to drinking and cheating with the neighbor (Terrance Howard), while his son Louis (David Oyelowo) goes to college and becomes a Freedom Rider, which is a much more interesting story than Cecil's. Together, Cecil and Louis become Black Forrest Gump and Gump Jr., as one of them is there for every single important moment in Black history for the entire 20th century.


There is so much going on with such a large cast throughout such a long movie that it all feels disjointed, and the frustrating thing is that it doesn't have to be. Taken on its own, Louis' story is fully realized and is so much better than everything going on around it. In Louis' plotline, he starts off as an angry young high-school student, joins the Freedom Riders, falls in and out of love, joins and leaves the Black Panthers, and loses and regains a relationship with his father. That's basically an entire movie's worth of material right there.


Let's compare that to Cecil's incredibly episodic story, given that this is what Daniels clearly wants us to do: The President arrives, troubled. The President confides in Cecil. The President does something good for Black people. Oprah complains. Repeat for seven administrations. At one point, Dr. Martin Luther King Jr. gives a monologue linking the two stories, because if you're going to have someone outright explain the message of your movie to the audience, why not make the boldest choice possible? 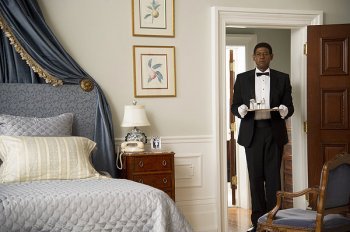 Cecil walks in on one of the president's "briefings".This isn't to say that Cecil's story is completely without its moments. though very few of them actually focus on Whitaker. Most of the film's best bits come from the actors playing the Presidents. (Except for John Cusack, who apparently decided being Nixon means putting on a fake nose and acting just like John Cusack.) Highlights include James Marsden's impassioned Kennedy and Liev Schreiber's unrepentantly assholish Lyndon B. Johnson, who barks orders from the toilet.

As for the Cecil-centric scenes, some are outstanding, like when he desperately asks a grieving Jackie Kennedy "Please tell me how I can help you," and some are outrageously bad, like Winfrey and Whitaker wearing matching disco jumpsuits.

Even the technical aspects of the film, like hair and makeup, are wildly inconsistent. Rickman's transformation to Ronald Reagan results in an eerily similar appearance, except during closeups where you can clearly see Hans Gruber poking through. The same goes for Schrieber, and also for Whitaker, Oyewelo, and Winfrey's aging makeup. It's true of pretty much everyone except, again, for Cusack, who put some silly putty on his nose and called it a day.

The sound editing and score, however, are unforgivably bad. The first time we meet Cuba Gooding Jr.'s character (because oh yeah, Cuba Gooding Jr. is in this movie), he is telling a dirty joke. We follow his raunchy story right up until the end, when all of a sudden, a locker slams and covers up the punchline. Why? Because dirty jokes get R-ratings, that's why. I thought this may have been a mistake until later on, Gooding jokingly calls Whitaker a "Black motha--." He doesn't get cut off or anything, he is just censored out as if this were television.


As for the score, it is absolutely baffling. There's the same bittersweet piano theme throughout the entire film, even when it doesn't match the tone of what's on screen at all. They even play the sad piano music for Nixon. Nixon. We can vilify him a little, guys, instead of acting like he's Bill Bixby hitchhiking at the end of an Incredible Hulk episode.

There are 41 credited producers on this film, and that pretty much explains everything. Because of how many people are involved, the tone, quality, and political leanings vary wildly from scene to scene. At one point, the film shows an apologetic Ronald Reagan wondering whether he's completely wrong about everything, turning him into some sort of sympathetic anti-hero for race relations. But then we have decisions that seem designed solely to anger conservatives, such as casting Jane Fonda as Nancy Reagan and making the last twenty minutes of the film a flat-out love letter to Obama. Hell, that last part even angered me until I realized we were talking about 2008 Obama. That dude was cool.

MINORITY REPORT: All things being equal, it could have been worse: Horatio Bacon Presents Lee Daniels' The Butler: Based on the Article 'A Butler Well Served by This Election' by Wil Haygood. No foolin', Horatio Bacon is the first credited producer. Horatio. Bacon. - Sean "Keanu Grieves" Hanson