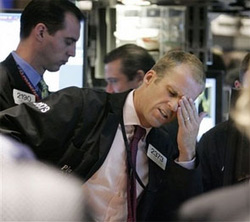 Stocks falling.The government spendthrifts around the world seem to believe that vomiting the half-digested contents of the public coffers into various private sector entities is the way to stop the collapse. They either trust that the men and women responsible for these dire economic straits will use taxpayer largesse to reform or they simply don't care. So far any faith seems ill-placed; the banks and automakers have come begging for more handouts, yet their wastefulness seems as carefree as ever.

The IV drip of taxpayer bailouts and loans is not going to save the patient. This situation requires a dramatic event to reshuffle the deck, to upset the global economic applecart.

Nothing stimulates every organ and tissue of the capitalist corpus, floods every economic gland and winds every fiduciary sinew, quite like the orgasmic eruption of spending seen only in protracted conflict.

War! Not the pitiful police actions in godforsaken deserts that have been slowly gnawing away at the US economy. Real, man-making war. Just the sort to waste an entire generation of debtors and mortgage-defaulters. To clean up the books and clear the balance sheets of all that persnickety debt. 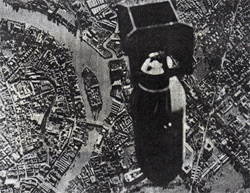 Bombs falling.The first and most obvious incentive to engage in large scale war is the stimulation of the job market. Companies around the globe are downsizing to stay afloat, creating millions of shiftless layabouts unable or unwilling to repay their debts. Nothing motivates volunteerism among this contemptible segment of society quite like the immediate threat of military invasion. Even if they are not motivated, the government has ways of motivating.

Forced conscription, militia auxiliaries, and the old shanghai are all options available. The employed can be conscripted and their jobs can be made available to those too feeble or clever to be forced into service. The military-industrial complex will need every available hand to contribute!

Rationing of goods can lead to individual thriftiness and the government is always free to seize materiel deemed necessary for the war effort. You would be amazed how crucial Korean LCD screens and Japanese video game consoles are to fighting a war.

For nations like the United States, which stand militarily almost unopposed in the world, the threat of invasion is minimal. But for other countries, the amount of economic stimulus they might receive is incredible. This makes the selection of warring nations crucial to determining the greatest benefit to the global economy. 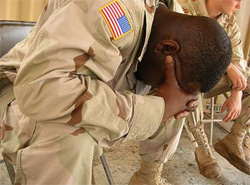 Unemployment rates falling.If the United States were to invade and pillage New Zealand, for example, the war would be over quickly and there would be little benefit to either party.

However, if Indonesia invaded New Zealand, or Australia invaded Japan, this could lead to many years of brutal conflict. The United States could go to war with China and Russia could face off against the European Union. Canada could use US bases to launch an invasion of Mexico and Peru could finally settle those scores it has with Morocco.

Think of each of these conflicts as a sort of stimulus package directed at military, manufacturing, and urban population centers. Each airbase must be rebuilt, each factory relocated to the inside of a mountain, and each city raised from the rubble. The millions of dead will require funeral services or, at the very least, mass-burnings. Think of it as cutting away the dead tissue. With bombs. The cities will be rejuvenated by new construction and, if they're not, they can always be bombed flat again.

Should nuclear weapons be used? Of course! An atomic bomb can level an entire city and it leaves an irradiated heap of rubble behind. It will take 50 years before that radiation dies down to reasonably safe levels, making each city nuked into an urban development time capsule just waiting to be unearthed and rebuilt.

It is my firm belief that with the careful application of military force, the global economy can be saved from the doldrums. I know that our better days are ahead of us, even if it takes global war to prove it.