From Des Moines to Da Nang the have-nots are having less not and the have-lots are having a lot less. Through no fault of our own, we now find ourselves in the throes of nothing less than a global economic collapse. The impact of this collapse is being felt throughout every industry. The banks are shuttering, the automakers are teetering on the brink, and if things continue down this perilous path we may soon be facing the extinction of the homemade cloisonné bead making industry.

The who and why and how are all important. I've created a short explanatory diversion if you are not up to speed, so feel free to read it and educate yourself as to how we have found ourselves in this predicament. If you are already familiar with the intricacies of our economic crisis then you may skip ahead.

How the American Dream Became the World's Nightmare
By Zack Parsons 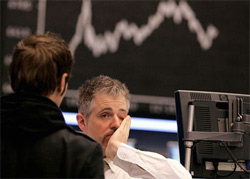 Stocks falling.Smelling of sweat and desperation, Joe Everyman claws his way into a bank and with a terrifying roar demands a home loan. Steve the Banker tries to point out that the man has no income and a credit rating that resembles an inseam, but Joe is wild-eyed and obviously dosing on some sort of exotic minority drug. Something Steve hasn't heard of like Floorge or Nedbeatties. Poor Steve the Banker has no choice but to give Joe Everyman a 600,000 dollar home loan.

Once Joe Everyman leaves the bank, Steve calls up his buddy Andy the Investment Banker. Steve asks Andy for help with the crazy loan he just had to give out to the guy with the glassy drug-stare. Andy tells Steve not to worry, he'll buy it. And at a hefty profit!

After a couple days Andy the Investment Banker starts to worry about the home loan. What if Joe Everyman doesn't pay? Andy will end up owning a stupid 600,000 dollar house with no sod and a marble countertop in the kid's bathroom.

Andy decides to break up the home loan into a bunch of pieces and then mix those pieces up with pieces from other home loans he bought from other friendly bankers. Then he sells the big bag full of the pieces to another banker in Iceland. And he sells another bag to a banker in China who he barely knows. And another bag to a banker in England he once saw naked. This goes on and on until all of the pieces of the mortgage are sold and the Andy has made a terrific profit. 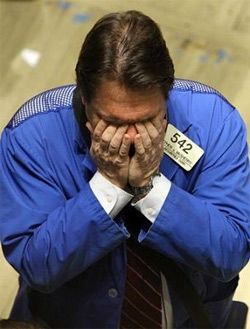 Stocks falling.Meanwhile, an investor in a submarine is watching all of this through a periscope. He decides to buy 10 million dollars worth of default insurance on one of the mortgages. All he has to do is pay a little money every month and if one of the bags of mortgages rips open and all the pieces fall out then the investor gets 10 million dollars. Only the bag doesn't seem to be ripping fast enough, so the investor decides to sell his insurance to someone else for 5 million dollars. Hey, he just made money!

Everyone is happy and making a tidy profit on all of this until, suddenly and unexpectedly, the crazed maniac Joe Everyman in the Inland Empire mini-mansion fails to make his first mortgage payment. And then he misses his second. By the time the third rolls around the bags of mortgage pieces are starting to sag and tear.

Then RIIIIP! All because Joe failed to pay his third month's mortgage the bag rips open and all of the mortgage pieces default and hundreds of bags rip open in a cascade and the banks selling insurance to investors in submarines have to pay out billions of dollars in speculative bets.

The next thing you know, every house in the neighborhood is shuttered, the water in the pool is green and full of mosquitoes, and you're selling your wife to a guy with guns for cans of baked beans and potable water.

All because the free market was over-regulated.