Morrowind Came Out 15 Years Ago This Week! Let's Relive The Authentic Experience 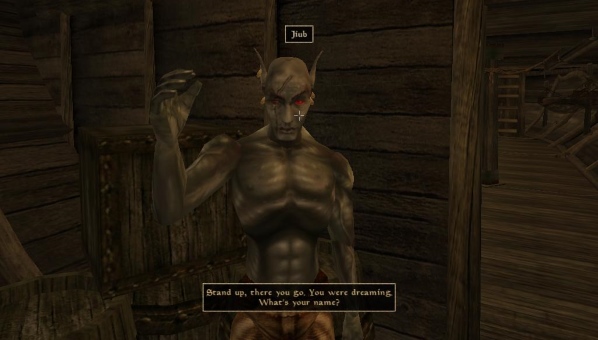 1. Meet Jiub, a more relatable character than anyone in Oblivion, Skyrim, or Fallout 4.

He says like three lines of dialog and I would die for him in real life without hesitation.

2. Do some character creation paperwork.

Be sure to make a custom class and name it something really cool like Adventurer, Sniper, or iddqd. Spend three hours consulting an FAQ to figure out which skills to place in your Major and Minor slots. Immediately restart after confirming your choices because you changed your mind about one skill.

3. Wait until it gets dark to watch an elf sneak into a bog.

He's got something good hidden in that there bog. You just need to wait for him to approach his stash. First, he's going to spend half an hour criss-crossing the entire village with exaggerated sneaky steps, hunched over like Shaggy in a very haunted hallway.

4. Wonder if your movement speed is broken.

It feels like you're walking. How do you toggle run? Oh, you are running. Well. It seems that you are destined to move at the speed of frozen molasses in traffic.

5. Rebind the Jump and Use keys.

Let me tell you who presses E to Jump and Spacebar to Use in computer games: Broken human beings. The default settings in Morrowind are blasphemy. Spacebar should jump. E should interact. Always.

Wonder what's in here? Oh hey it's some sort of vampire ghost! Your weapon doesn't hurt him at all. Also, you're cursed forever. You have zero strength, which means you are overencumbered, which means your movement speed is now 1/100th of its normal excruciating pace.

People have joked about these things for years. They don't seem so bad. Just move forward a bit and watch the cliff racer react to your presence by... gliding into a tree? Getting stuck in the geometry? Taking about half a minute to gingerly lower itself into melee range?

8. Swing your weapon nearly 300 times to hit the enemy once.

Sure, it takes longer to kill a bad guy, but just think about the emotional damage you're inflicting with all those near misses!

If you accidentally manage to hit an enemy your weapon skill might go up. Now's a good time to stop what you're doing and make a plan. The secret to efficient leveling in Morrowind is that you're not supposed to do the things you want to do. To be OPTIMAL, you need to hide behind a shopkeep and run against a wall for three hours. Or let a mudcrab bite you while you jump in place. You'll never figure it out.

10. Get to Balmora and find your contact, a shirtless drug addict.

You're on a very important mission. Your life is in this guy's hands.

12. Try to steal something.