It's been a while since I've had the opportunity to sit down and write something, but I have a really, really good excuse: I've been moving! Commuting two hours each way to and from work just wasn't cutting it anymore, so I packed up my junk and left my hometown for the bustling metropolis of San Jose, California. I also just happened to have my camera phone with me and was able to document a great deal of the moving process for posterity (and to forever warn others against moving).

The story begins just after the new year when I secured an apartment downtown. I decided to take pictures and keep records of everything because I didn't have a TV and there was nothing else to do. 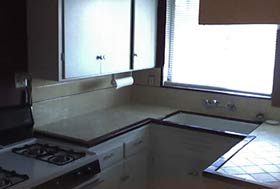 This is a picture of my kitchen. I'm pretty sure it's not actually a kitchen, but just a corner with some kitchen tile on it so my landlord can wink and say it has a "kitchen". It also came with a fraction of a roll of paper towels so that I may clean my fraction of a kitchen. Today, I moved into one of the smallest apartments currently known to exist. It's fine for me because I don't have tons of stuff, but if I ever have more than about 2 people over at once, I'll probably have to put my furniture outside and then let them in carefully, one at a time.

I think I did a pretty good job packing, if I do say so myself. I brought everything I could think of that I wanted to have at my new place and just left. I've got my laptop, towels, clothes-- all the essentials, even down to my fingernail clippers. Trips to the store should be minimal for the next few days, at least. It felt really odd to leave home at first, but now that I'm here, I think I'm going to be fine.

I forgot my bed.

Thinking that I could "spice up" my walls, I took a look a look at the poster display at the end of the aisle. You know, that huge flipbook thing that is about 20% bikini women, 20% motorcycles, 15% Garfield, 15% bikini women on or near motorcycles, and 10% that one poster that gives you 365 reasons to party. I found a poster all right, but it was too good to keep all to myself. It's going in the cubicle. 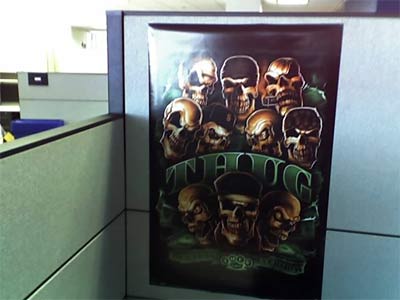 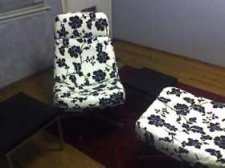 Shut up. It was time to get some good-looking furniture, and being a 22-year-old straight male, I have no idea how to do that. I went to IKEA in Palo Alto anyway and got lost in the "showroom" area for about 90 minutes. It was laid out like a horrible hedge maze that tries to sell you pieces of the hedge that you take home and put back together in a way that looks pretty good from a distance but something somewhere is slightly crooked so only 3 of the legs touch the floor at a time and it's so annoying but you can't really do much about it so you slip a magazine under that one side of the hedge and you think you're really smart until 2 days later when you set your pen down on the hedge and it rolls away and damn it. Anyway, I ended up getting a chair, a matching footstool, and some end tables.

I went to the store today, and look what I parked next to: 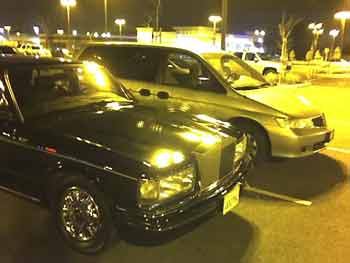 That's right, a Rolls Royce! Then I went home, and look what I parked next to: 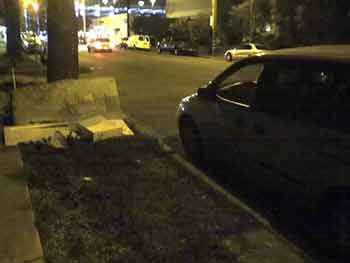 Every apartment in my building comes with its own storage shed out back as an added bonus, and today I opened mine up for the first time to have a look around. You'll never believe what I found! 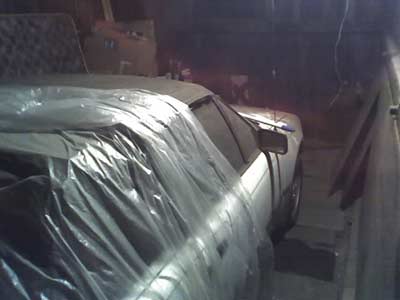 JACKPOT, AN OLD SCARY CAR!! Finders keepers, suckers! I just got myself a new ride for free! Seeing as how it's probably a crime scene or there are skeletons inside, I haven't touched it yet. Instead, I've invited Dr. David Thorpe over to help snoop around, take it for a spin, and possibly ghostride it with me, but only because he owns a flashlight (a luxury I do not yet have). Because of its mysterious origins it is being referred to as "The Terrorwhip".

There also seems to be a box spring back there. Where the hell was that thing and its friend the mattress back on January 5?

It belongs to my landlord. Myth (and mirth) busted.

I spent the weekend charting my position in the apartment building as well as putting together a list of what I know about my fellow tenants: 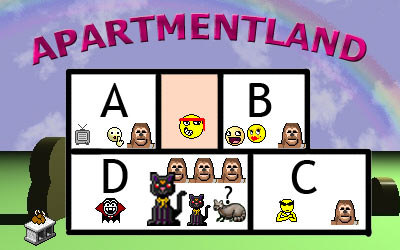 Madmax, 2nd floor in the center - That's me!
A - I've never seen this guy. All I know about him is he has a loud TV and an enormous dog (represented by Chewbacca) that barks at me every time I walk by, and he keeps telling it to be quiet.
B - Two people live here and have sex approximately 8 times a day. Either that or they just like to bang their furniture into my walls every so often for no reason. It's hard to tell. They have an enormous dog that barks at me every time I walk by.
C - The building manager lives here, and he's OK in my book. He has an enormous dog that barks at me every time I walk by.
D - My nemesis. Not only is his apartment twice the size of everyone else's, but he has an enormous Jeep Cherokee that usually takes up 2 spaces in the tenant parking in back. On top of that, he has multiple enormous dogs, two cats (one of them an enormous cat) and possibly a raccoon. He is represented by Dracula because he sucks.
Poop on top of a cinder block - It's been there ever since I moved in. I think everyone is reluctant to clean it up because we're not sure if it's a phenomenon that we will ever see again.

So, for those of you nice enough to ask, that's what I've been up to for the last 3 months. And the best part is, this wild ride shows no sign of letting up!