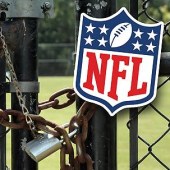 See, it's a lock and the NFL logo. This symbolizes the situation because it's an NFL lockout.The impact of the NFL lockout extends far beyond fans of the sport. Sponsors, television networks, thousands of working class team employees, and Pittsburgh area rape kit suppliers will all be affected if the season doesn't begin as scheduled this September.

So what's causing the lockout? How likely is it that the situation will come to an end anytime soon? The issue is incredibly complex. Each side has a list of demands, and while money is naturally the core issue, attempting to keep up with the particulars is enough to make anyone's head spin.

Under the current system, they only receive most of the NFL's profits. In order to keep the league operational they are asking for at least all of the profits. In return, the owners are more than willing to give the players all of the league's debts.

Better seats to their teams' games. No more air conditioned owner boxes way up on top of the stadium. They want to be closer to the action, sitting on the shoulders of players on the sidelines.

Each team logo must be changed to flattering depictions of the owner's face.

Players have to stop getting concussions then developing long term health problems while owners continually back away from taking care of them. Be careful out there! If you're about to get hit in the head, cover up with your forearms or something.

Unrestricted access to the box of kittens. This includes nap time, the fuzzy feeding frenzy, and Mr. Peepers' dress up show for itty bitty kitties.

On curfew nights, the ability to play Nintendo in the hotel room even if it's late. Negotiable if it's a scary game that will keep players awake at night peeking out from under the covers.

The commissioner's phone number and a promise that he will always pick up the phone in case someone needs to talk about girl problems or the latest True Blood. 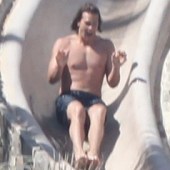 Patriots quarterback Tom Brady sets an example for the league by putting on a brave face.No more penalties for endzone celebrations. In fact, celebrations should be encouraged and rewarded with more points.

Perfect player ratings in Madden from now on, for everyone.

Headphones that are engineered to go extra far when thrown in anger and maybe even explode to demonstrate the coach's fury.

If a coach yells loud enough, a play has to be reversed in his favor.

One of those iPads. The new ones, not the first gen. They'll know if it's refurbished, so no skimping out.

You know how X and O have become the standard symbols for drawing up plays? Those have to be changed to the logos for the Empire and Rebel Alliance.

Please, no more detonation collars. They promise not to run.

Upon the completion of a game with no major blown calls, the officiating crew will receive a pizza party of appropriate scale and intensity.

Instead of black and white stripes, graphic t-shirts from the internet featuring hilarious puns and witty jokes.

When a referee's whistle is blown everyone has to stop calling him names and promise to never hurt his feelings again.

Since terribly produced reality shows are still really popular, they need all players to pre-record segments where they talk to the camera to explain very basic things that the audience will see on the field. For example, "I was so surprised when that guy threw the ball!" and "When the guy started running I thought OH MY GOD because it was so shocking!"

Sideline reporters need more access to players and coaches. Networks can't get enough of those braindead questions that are answered with cliches and thinly veiled brushoffs.

Focus testing shows that the audience responds favorably to a ball with more "extreme" elements. The football's more normal, boring qualities need to be removed and replaced with a fresh in-your-face attitude. For reference, check out that new Smurfs movie.

Every player must stop and sign autographs or take pictures with every single fan, no matter where they are or what time it is. If a player fails to comply, they will be branded a terrible person by internet forum posters for all time. This condition already exists but we'd like it to become officially sanctioned by the league.

You know how you can buy that Sunday Ticket package to see every game on television? They need to stop increasing the cost by $800 every year and charging an additional gold brick for every game you want to see in HD.

Everyone's team must win all the games. All of the teams, all of the games. You work it out, math geniuses. Just make it happen.

Fans are going to need the ball to be more extreme and, if possible, in their faces.