If you live in north America or Europe, the New Nintendo 3DS (not to be confused with the Nintendo 3DS, Nintendo 2DS, Nintendo 3DS U, or Nokia N-Gage) will not come with an AC adapter. I'm pretty sure that means you won't be able to charge the internal battery unless you rub the system against a power outlet for a few days and hope for the best. 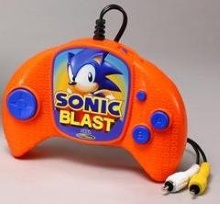 Pictured: Another quality handheld system that saved money by not including a power cord.By withholding the cable, Nintendo gets to save a few bucks on every unit sold. You, on the other hand, get to spend exactly what you would have spent on a complete system and - as a bonus - you also get to buy an overpriced proprietary component that's required for the thing to function.

This is a great business decision. In fact, Nintendo should probably take the idea to its logical conclusion for maximum profits and long term success.

Currently, the 3DS boasts a top LCD screen with autostereoscopic 3D technology as well as a resistive touchscreen on the bottom. These cost money. Wouldn't Nintendo be better off removing them, and saving that money? It only makes sense. I'm not suggesting that they put out a 3DS with no screens at all. That would be preposterous. Instead, the two screens should simply be recycled from old Tiger Electronics Double Dragon handheld units.

Graphic design. High quality printing. A sturdy cardboard box with custom inserts that protect the hardware. Why should Nintendo spend actual money on these things when ungrateful customers will just throw them all out?

Going forward, Nintendo's packaging philosophy should be summed up in one sentence: A single sheet of soggy newspaper.

There's apparently something called crumblonium, the cheapest strain of commercially available plastic. If Nintendo switched to this material they could save as much as ten cents per New 3DS. Multiply that by tens of millions of units, and you're looking at a significant sum.

Sure, crumblonium is rendered into a fine dust the moment it contacts human skin. And technically a handheld without buttons would leave players without any way to interact with their games. But maybe it's time for everyone to grow up and realize that the minor inconvenience of many individuals is not as important as the profitability of the company they are loyal to.

Nintendo could save so much money by never making any software at all. I know they've already been toying with this concept on their consoles for more than a decade, but they still manage to put out a handful of games every year. That's not going far enough.

If they completely stopped wasting money on all the salaries, office space, and equipment that go into software development, their short term profits would go through the roof. It's simple math.

Why does every 3DS come with a wasteful sheet of paper alerting buyers about potential health issues that could come about while playing video games? Imagine how much Nintendo could save by not including that flier, and how much fun kids could have coming up with their own safety warnings.

"WARNING: Users with epilepsy shouldn't play for more than ten hours at a time."

"Having too much fun can give you giggles!"

Most users already have plenty of circuits and processors in their house. For their convenience, the 3DS should not come with any circuits or processors inside the device. Why burden everyone with more techno-clutter?

Ever since Beats by Dre everyone has been fascinated by sound. Well, get over it. Nintendo could save up to three dollars per handheld unit by removing speakers entirely. In their place, I suggest that the new 3DS startup screen should be a diagram that teaches players how to whistle.