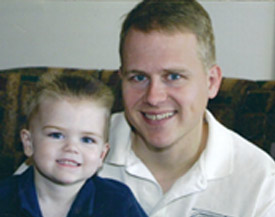 2008 was a difficult year. It began with a series of health issues that included me shattering my coccyx playing coed beach volleyball, getting bit by a Lyme disease tick somebody left in a sombrero (it was a false alarm), and finding a lump in my male breast that was, thankfully, benign.

My wife, Carol, my daughter, Christiana, and my son, Hunter, decided that we should take a break from our calling to the ministry and drive up to Wisconsin Dells to rejuvenate and get a look at some robots. The robots were wonderful and we had a lumberjack meal and bought some fudge. They have a delicious tropical island themed restaurant there that is just like eating in Jamaica if everything was made with cheddar cheese.

It was a fine trip. Fine, that is, until Hunter, my beautiful blessed boy, got bit on his arm by a recluse spider. He said he felt alright, but by the next morning his whole body had turned purple as a Grimace so we loaded him up in our PT Cruiser and drove him to the hospital.

Turns out he died for six minutes while they were replacing all his blood with new blood, but my congregation did a conference call prayer with me and when we came back from the Long John Silvers, Hunter was awake and talking. Not just talking normally. He was talking about an incredible experience he had on the other side.

Hunter Malarko went to heaven. For some reason it was Techno Heaven, not Normal Heaven, but it was real. This is what he saw. 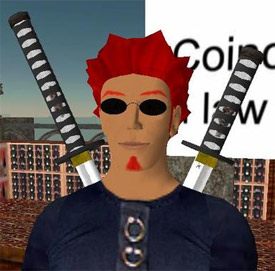 "Guys in sunglasses and a lady with slicked back hair wearing leather pants and cool jackets appeared above my bed. They were carrying Mac-10 machine guns with those long suppressors and they said 'Come with us Hunter. Into the Neural Grid. Join us in Techno Heaven.' There was some really cool music playing and flashing lights so I decided to go with them."

One of the first people Hunter met was Techno Jesus.

"He was Japanese with a samurai sword. One of his hands was constantly tapping really fast on an ergonomic keyboard. He had two trackballs and he was wearing data shades connected to the Neural Grid. 'WINGS. We'll get you a pair once you've finished your first run as an 4ngel.' The Yakuza control a third of Techno Heaven. The rest of it is controlled by Mega Corporations."

People were curious about what the dead do for fun in Heaven.

"It's one vast, techno hallucinatory underworld. You're always among the dregs of society and that's just how you want it. There's this punk vibe. This cowboy vibe. This outlaw vibe. People drank absinthe and showed me knife tricks. Everybody had a machine gun and a laptop computer. They were all coders. I told them I didn't know how to code. Gato, my contact at the Chiba Club, told me to keep that one commented out. No telling who was listening."

Hunter did not only encounter benevolent spirits in the afterlife. He also ran into a certain infamous villain. 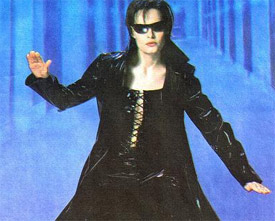 "Lu Cypher. Get it? Spinner of techno black magic from the depths of the Neural Grid. He was once a runner, like all of the 4ngels, but he turned his back on them and sold out to the Sonubishi Electric Corporation. Corner office. Two personal assistants. And multiple layers of encryption on his data file. But once Techno Jesus gives you a run, you have to hit the keys or wind up brain burned."

Hunter wasn't afraid to confront the devil, but what he wasn't expecting was temptation.

"I was staying in the backroom of the Chiba Club, mixing hot load RAM for the other runners, and trying to keep my head out of the fuzz. I don't know how Cypher found me, but one minute I was soldering wetware chips to a boosted Daisho board and the next minute I was dialed into the white-on-white conference virt for Sonubishi.

The white background paneled into a scene of a Shinto temple. Subroutines creating geisha girls and priests in the background. Cypher was waiting for me. He didn't look like I expected. He was a she. Smoking hot, like teenage Joan Jett with a bone implant and triple chipslots. 'I've got an offer for you kid. Sign up with Sonubishi and help me take down the 4ngels.' Not gonna happen, I told her. You're going to have to fuzz my bits. 'That can be arranged.'" 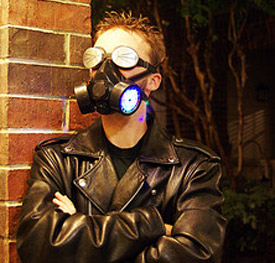 Of course, Hunter's stay in Techno Heaven was only temporary. As he prepared to make his daring run on Sonubishi to pilfer Cypher's datafile, he started to experience signal lag.

"My movements weren't tracking. It was like watching a virt over someone's shoulder. The Ramen wasn't tasting right, you read me? Before I could execute my tracer routine, Techno Jesus appeared before me. He severed my cord with a flourish of his samurai sword. I was shocked. 'It's not your time for the big run, kiddo. I misjudged. It's time for you to go back, but this run'll be waiting.' I tried to say something, tried to refuse, but he sent me back. Here I am. Just waiting to go back in."

Hunter came back to us with so many stories it has filled his entire book. We hope you are intrigued by this small sample of what he saw and that you will donate to the Kickstarter to fund his sister's book. Christiana was accidentally given a poison apple and when she came back from heaven she had tales to tell of her own. Tales of Mexican Heaven. It's real, and Christiana is prepared to tell you all about it.