Way back in September, in the time before the Earth cooled and life began to sprout upon the barren surface, I started an organization called Eating Lethal and Endangered Animals While They're Alive (ELEAWTA). This organizations was driven by the simple and humble purpose of finding dangerous animals that are endangered, defeating them in single combat, and eating them. ELEAWTA returned for a brief update in November as the group had a hand in declaring the nugget the official food of America. For such a new group, having a hand in crafting national policy was quite an honor. In the interim, ELEAWTA has taken great strides toward completing its mission. As the president, founder, chairman, CEO, grandmaster, and supreme high overlord of ELEAWTA, the task has befallen me to update the members of the prestigious group, and indeed the world at large of some of our most recent activities.

Next month, the secret club handshake!

First off, I would like to address some of the naysayers out there. Stop saying "nay" already! I still get angry emails from animal rights nuts saying that ELEAWTA is an inhumane organization, even though I haven't written about our delicious exploits in over four months. On the one hand, it means that someone out there is actually reading my old articles, which I have to say is pretty flattering. I mean, most of the Something Awful writers tend to regard the news archive as purely decorative, so it's certainly refreshing to see that people are using it for its intended purpose. On the other hand, let it go already. You animal rights people love to sit on your high tofu-horse (using a real horse would be cruel) and dictate how the rest of us should live our lives. Meanwhile, ELEAWTA is out there everyday trying to make a difference for people. What if, years down the road, it turns out that the knowledge that bengal tiger tastes amazingly similar to California condor is the key to curing cancer? Without ELEAWTA's tireless efforts, the world of science would be bereft of that knowledge and cancer would continue to decimate the population. It seems unlikely, sure, but how would you feel if you got a tumor the size of a major league baseball and there was nothing that the doctors could do about it because they didn't know that bengal tiger tastes like California condor, so you died? You wouldn't be so high and mighty when you're dead, I can tell you that! Obviously, there are only two sides to this issue: either you support our cause or you support cancer. I realize that's not great logic, but hey, it's basically what the Bush administration used to justify the war and it worked for them. You already support cancer. Don't make it worse by supporting terrorism, too, you terrorists. 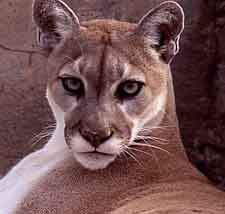 He doesn't even like Thin Mints! The cougar is an invincible foe!

All of you cancer-loving PETA freaks unleash your soy-based rage on me because I advocate beating animals to death before eating them. You call it cruelty, I call it giving them a fair chance. ELEAWTA only deals with dangerous animals, ones born with natural weapons. We don't just walk up to cows and start pummeling them mercilessly. We put ourselves in danger. Every encounter is an eat-or-be-eaten situation. You can't just walk up to a cougar and claim that you're selling cookies for you Girl Scout troop, then when the cougar turns away to get its wallet so it can buy a single box of Thin Mints, beat it to death with your shoes. That tactic doesn't work, my friends. Cougars are smart. Not smart enough to stay of the endangered species list, apparently, but pretty smart all the same. They don't carry wallets, just so the ploy won't work. No, if you want to make cougar burgers, you've got to fight the cougar on fair terms. No easy task, considering the cougar's sharp claws, large teeth, and surprising desire to live. If you ask me, there's no more humane way to get food than by giving the animal a fair chance. If the cougar wins, there's no doubt that it would eat its prey. Why should we be denied the same right? No, what ELEAWTA does is not inhumane, cruel, or immoral. If you want to talk immoral, take a closer look at vegetarianism.

Oh that's right, I went there! I know that after reading the end of the previous paragraph, many of you made a tofu-beeline (using real bees would be cruel) to your hotmail accounts in order to fire off a long, rambling, self-righteous email to yours truly, but let me explain myself. I've already said that ELEAWTA gives the animals a fighting chance. When was the last time you saw a plant fight back? When you rip a head of lettuce out of the ground, where's the justice there? Plants are inanimate, they can't defend themselves. And yet, no one has any moral objections to snapping their roots, ripping off their leaves, breaking their stalks, or any of the other myriad ways in which the plants of this world are mistreated. Eating plants - now that's inhumane. 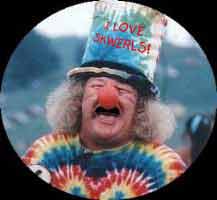 "Yay, meat is murder! Now which way to the McNuggets?"

"But Greasnin," I can hear you say. "I hate to argue with you, seeing as all you say and do is right and all, but vegetarians aren't the only ones who eat vegetables." You're absolutely right, and thank you for bringing that up. I'm not advocating cutting vegetables out of our diet altogether any more than I'm advocating taking up a vegan lifestyle. Rather, I'm getting ready to point out the gross moral inadequacy of vegetarianism. Your average strict vegan may be chalky, emaciated, sickly, weak, tired, and physically unattractive, but at least he sticks to his guns. People who go vegan for ethical reasons think that killing animals for sustenance is wrong, so they stop doing it altogether. Your average vegetarian, however, is basically a hypocritical wannabe hippie poser. That, of course, does not include people who are vegetarians for religious reasons. If there's one thing I believe in, it's that eating endangered animals before they disappear entirely should be our top priority. If there are two things I believe in, however, they're that eating endangered animals before they disappear entirely should be our top priority and that everyone is entitled to freedom of religion. On the other hand, people who are vegetarians just because "killing cows is murder, man" need a good, swift kick in the ethos.

Chickens are people too! Well, no, I guess they're not. That's pretty much why they're called chickens.

I'm talking about the people who claim that they're vegetarians because they don't eat beef or pork, but have no problem eating chicken or fish. That's pure hypocritical bullshit, and I'll eat anyone who says otherwise. How can you get holier-than-thou about eating cows and not be outraged about the treatment of chickens? Vegetarians like to argue that the way cows are killed is cruel. Get some perspective, patchouli-boys. The beef industry is a lot like the Nazi death camps of WWII - built for efficiency. The cows are killed quickly. If they want to meet the huge demand for steak, sirloin, and hamburger from... well, from me mostly, the hard-working folks at your local slaughterhouse can't stand around all day watching the cows suffer. The cows get a quick and simple piston through the head - bam - it's over. But the eggs in your oh so ethical "meat free" McMuffin, those come to you courtesy of suffering and brutality. A full ninety-eight percent of edible eggs in America come from battery hens. Battery hens have portions of their beaks cut off with a hot iron when they're young, then they spend the rest of their short lives crammed into tiny wire mesh cages with as many as eight other hens. In such close quarters, the hens can't even spread their wings, let alone make any sort of legitimate nest. When one of the hens in the cage dies, it's fairly common for one of the other hens to actually try to make a nest in the corpse out of desperation. Their natural instincts are suppressed by the harsh confines and weak diet which makes them lay more eggs. Many battery hens die by being crushed in the cage. Others die from exhaustion brought about by their nonstop laying schedule. Those that live long enough to stop producing eggs regularly are slaughtered. The egg industry doesn't mistreat the hens like that in order to pass along the savings to the consumer. Egg prices are still on the rise. 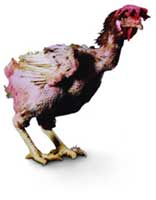 Man, that is one nasty looking chicken. It almost makes me... wait... no, I still don't care.

Knowing what I've just told you, how can you say that the treatment of cows is unethical but the treatment of chickens is fine and dandy? All you self-righteous vegetarians need to stop preaching your gospel of bias and ignorance and either go vegan or just admit to yourselves that you don't eat beef and pork because it's a trendy thing to do. It's okay, most people go vegetarian do it to impress somebody else. We'll all understand if you come clean. As for me, since I know all those facts about the horrible treatment of chickens, do I still eat them? Of course I do! How can I do that? The answer is simple - I don't care about chickens. The plight of the battery hens doesn't weigh on my mind in the least. My mind is way to busy caring about important things like the war in Iraq, securing a viable democratic candidate for 2004, meeting my deadlines, and remembering every single line to the Scorpio episode of The Simpsons to waste neurons worrying about whether Chicken Little has enough room to crap. Now that's an ethos!

That's all for this month's ELEAWTA newsletter. Stay tuned for the next installment, when I'll bring you an up-to-the-minute report of newly inducted member Reid "Frolixo" Paskiewicz" single handedly wetting himself in combat against a timber rattlesnakes! Sounds like fun! And remember - if you kill an animal in a fair fight, it's not murder, it's self defense!