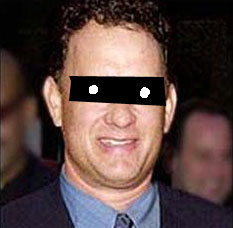 ??????!!!A good friend of mine works in the TV industry. She works behind the scenes for a major late night talk show - I'm not going to tell you which one because this article might get her in some hot water - that most reasonable people do not hate. That should rule out Colin Quinn's "Tough Crowd" for those of you keeping track. She does a number of different things at this job, but part of her job description is doing one of those odd jobs that you probably did not even know existed; she is a pre-interviewer. When celebrities come in she will sit down with them next to a deli plate and some bottled water and go through the pre-written questions the host will be asking. Some hosts live by these scripted questions and some particularly dry guests plan on going on stage and filling them out like a questionnaire. The best interviews tend to deviate broadly from them.

The pre-interview is conducted just to let the guest know what the questions are and prepare them for a comfortable visit. They don't necessarily have to respond to the questions during the pre-interview, although they can nix ones that they don't want to be asked on the air. Frequently the pre-interview will be used to add a couple more good questions, generally by asking something vague like "what are your hobbies?" and then the host can say "I read that you are into model railroads". When my friend told me about this aspect of the pre-interview my scheming humorist mind awakened like a sleeping giant. I let her comments slide at the time but less than 24 hours later I was on the phone and cajoling her mercilessly to let me do something about the pre-interviews.

I originally asked her to conduct entire interviews of various celebrities for me, but this proved to be far too much of an imposition on her. I was going at it from the "ask for the world and get North Dakota" angle, and it seemed to work. With relentless effort and semi-good natured threats of blackmail I wore her down until she had agreed to ask each celebrity one question. Since they did not book the show far enough in advance for me to tailor questions to each celebrity I opted for a different arrangement. I provided her with a list of two hundred questions and she would ask them in the order in which they were written, one per celebrity, and relay the answers to me.

That was almost a year and a half ago. For the first few months of that time I pestered her about asking the questions and she reassured me that she had been doing it. After a while I actually forgot about it and she never brought it up when we talked. Late last week I received an email with an attached Word document entitled "answers.doc" and to my amazement it included my list of questions with 173 of them paired with answers and the names of various C, B, and even A-list celebrities. For the sake of her job and my lawsuit freeness, let's just say that she made all of these answers up and it's a big joke. After all, it could be, I have never been to her office!

Before I segue into the questions and answers, let me be the first to disappoint you that the vast majority of the responses were downright boring. When a left-field question was paired with an unimaginative dullard of a celebrity I got shit in return. These answers ranged from "what?" to the oft-repeated "he's not really going to ask that, is he?" and I'm not going to bore you with who was responsible. I have, instead, selected the twelve I thought to be the most amusing or enlightening. I hope you agree. 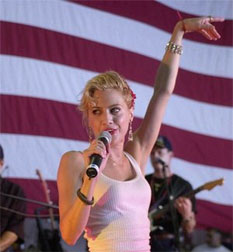 Not a cannibal.Q. Why do you hate freedom?

A. "Boy, why don't I hate freedom!? It's itchy, it chafes, it doesn't…I think mainly it's the smell though. That awful, awful smell. Freedom stinks." - Will Ferrell

A. "I think I would make a really bad cannibal. I have to tell people to catch spiders and put them outside. I couldn't imagine eating a person." - Brittany Murphy

Q. Are you ready to rock?

A. "Come back in five minutes and ask again, please." - Kelsey Grammer

Q. The orc: fact or fiction? 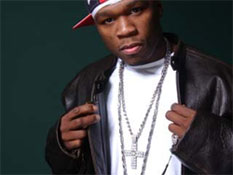 Q. "If the world's most infamous dictators challenged the Iron Chefs to a battle in Kitchen Stadium, whose cuisine would reign supreme?"

A. "[Without hesitation] Idi Amin. He had this hotel set up in Kampala where he would send political opponents and people within his own regime who didn't please him. Then, of course, they would be tortured and usually killed horribly. What I think would give Amin an edge on a cooking show would be his refined palate. He ate his political opponents, he sometimes cooked parts of their bodies himself, so I think he would know how to prepare a slab of Kobe beef." - Vin Diesel

Q. What is your preferred peer to peer client?

A. "That's a trick question. I think if I tell you that then you are required by law to make a citizen's arrest." - Harry Shearer

Q. Gumby was once just a little green ball of clay, but what would he be doing if we could see him today?

A. "What he's good at; scaring the shit out of children. It's either that or he's a green grit on Art Clokey's basement floor." - Marc Maron 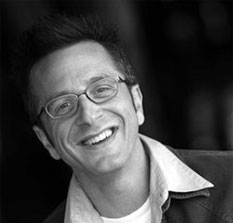 Maron hides dark secrets known only to Gumby.Q. Do we really love the 80s?

Q. In the classic film "Critters" did you find yourself more closely identifying with the ravenous Crites or the shape-shifting bounty hunters sent to destroy them?

A. "I remember that movie! It was like 'Gremlins' but the things were aliens and they were nasty from the get-go. [Pauses to think] I would have to say the bounty hunters. I don't remember them, but I have a feeling I would be haulin' ass after those little bastards with a Mossberg." - Ted Nugent

Q. If you could travel back in time and make out with any past president, who would you choose?

A. "[Laughter] I don't know what [agent's name] told you about me, but... Ahhhh, I have heard through the grapevine that Abraham Lincoln danced a fierce tongue tango. It's a tough call though because JFK had those kissable lips that could make a girl weak in the knees. Du bist eine cutie!" - Ben Affleck

A. "I'm not wearing shoes now, but I guess I will be later, so I guess…uh yes? Is that where that one is going? Should I say yes? That seems like a pretty fucked up question." - Fred Durst

I hope you enjoyed the Q&A session.

Nary a Tincture Could Salve Your Band

As if Dr. David Thorpe didn't have enough to worry about what with his serious research at NASA and the painstaking maintenance of his encyclopedic musical knowledge, he has yet another problem: your shitty demos! That's right; it's time for another Your Band Sucks Demo Roundup.

"Read the following sentence: "Mental Image is a hard-hitting rock band with a positive Christian message." Did you believe that? You probably had no reason not to believe it. I'd like to contend that if a hard rock band doesn't make it entirely plain and apparent that they're not Christians, they should be instantly labeled as a Christian band. It's the only way to be safe. Mental Image, with their lyrics about sanctifying souls and shit like that, fails this test."

Get your earplugs ready, because there are tantalizing mp3 clips of each and every god-awful song!