A Paleolithic Man Definitely Could Have Put Pumpkin in Coffee

Hey everyone. Holiday paleo season is upon us. 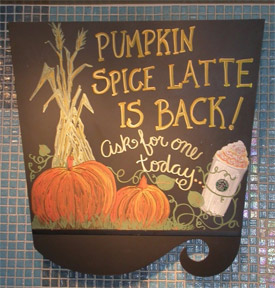 Drink up: the pumpkin iced mochaccino is perfect paleo as long as you let the ice melt first.

I have received some questions and concerns about whether or not Paleolithic men and women ate seasonal foods flavored with pumpkin. Before this snowballs out of control on the message boards I wanted to address it directly: pumpkin-flavored foods are perfectly paleo.

Basically people have been eating pumpkins for thousands of years and also drinking coffee for thousands of years. Doing a pumpkin infusion of coffee or cream is not that difficult. This goes back to the whipped cream discussion we had last week: as long as the tech was possible for cavemen and in use somewhere, then it is viable.

The China Rule, folks. Since the Chinese had clay evaporation refrigerators and fresh cream was technically available to enterprising hunter-gatherers, then whipped cream is paleo. Adding pumpkin infusion to that just means using a boil down and strainer, both of which could have been fashioned from roots and the stone boiler we discussed last week.

Another one I saw some concern about was candy corn and specifically those pumpkin candies in the candy corn. Turns out they are perfect paleo. Surprising? You bet. Candy is usually a big no-no for paleo, so take that into account before deciding for yourself. That said, I am a big fan of candy corn myself, and there is no reason to believe that Paleolithic Americans might not have eaten those candy pumpkins. They had wild corn, wild pumpkins, and they ate wild honey. The ingredients are there. Could they have combined them to form those pumpkin candies?

I say, yes, and in fact it's a little insulting to think that we are so clever to come up with these pumpkin candies and that early Native Americans would not have seen the same potential. Only a few steps away from them making candy molds out of buffalo horn and the Brachs corporation making those delicious pumpkin candies. Direct lineage and totally paleo. 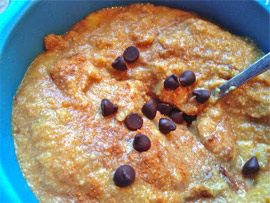 Going overboard with decorations can be just as bad for paleo as refined sugar or grains. That's why Seeara and I went perfect paleo for our wedding cake.Not pumpkin related, but I want to finish this up with another controversy I have seen coming up a lot on the boards lately is Genna's paleo wedding cake. It was not technically paleo, but not for the reason a lot of you think. Her carrot and ibex lard recipe was totally legit, her coconut dough was cute and the piping on the decorations using a goat bladder and wood tip were genius.

But then she had a topper of a man and a woman with distinct faces. Genna, come on. Paleolithic depictions of human figures did not include facial features and if we're being real here, which is like the whole point of paleo, the frosting would not have used coconut sap. Even though things got pretty heated on the boards when we discussed this, I am going to give Genna the benefit of the doubt.

Genna was not a member when the coconut sap controversy broke, but it's honey or maple syrup only. We are still debating agave sweetener with most of us on the non-paleo side as of the last poll.

Sorry, Genna. Cool cake though it's too bad you couldn't stay true to paleo at your weds like the cake Seeara and I had at our wedding. Keep working at it and someday you can fully live that perfect paleo life.

Hope this clears everything up this pumpkin season. I will be back on Monday to talk about making logs into kettlebells for your paleo workout and what is the best breed of dog to buy to chase you on your next 5k.