Making the Perfect Cup of Coffee

The perfect cup of coffee is nearly as elusive as a good metaphor. Some people have spent their whole lives in the pursuit of perfect coffee and died without having known its taste upon their lips. That sounded like a bad idea, so I decided to try for around a month and succeed instead.

Here's what I learned.

Ideally, you want to a bean that strikes a perfect balance between all of the above. Don't even bother with the brand name stuff. Find a local coffee bean grower that charges slightly more than you're comfortable paying.

Arrange a daily delivery of a single handful of coffee beans. Why not buy enough for several days? After a bean has been separated from the plant it loses half of its original potency and flavor every single second.

You could buy an electric coffee grinder. No, really, it's fine. Everyone half-asses it sometimes. Totally understandable.

If you want truly authentic coffee flavors, your only option is to use a mortar and pestle. Work the beans until the fragments are no more than a micro-inch in size. Depending on your arm strength this should take no longer than an hour. You'll know you're done when your second wind gives out and your eyesight is blurred by tears. 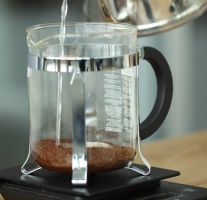 Conventional coffee machines are terrible. Electricity changes the polar magnetic orientation of each water molecule that passes through the machine. This completely alters the flavor of anything that attaches itself to that water.

Get a French press. It may seem difficult and even a little old-fashioned or outdated, but the process is pretty simple.

Heat your water until it's just shy of boiling. Here's how you do that: Heat the water until it boils, then curse and take it off the heat, continuing to curse at yourself as it cools for thirty seconds or so. Now it's ready.

Sprinkle your freshly ground coffee in the bottom of the carafe. Pour the not-quite-boiling water on top. Recite the sacred incantations. Remember that the precise ratio should be one scooch of coffee for every splash of water.

Your mug should not be an afterthought. Its material will dissolve trace particles into every cup of your coffee, altering its flavor. Don't skimp out on some cheap mug. Splurge on one of those high-end models made of 100% pure oxygen.

Remember what I said about coffee degrading every second after it has been harvested? Time is still of the essence at this stage, so pour your coffee as quickly as possible and drink it up in a few frantic gulps.

Some people prefer to add sugar and milk or cream to their coffee. We call these people "correct". No one should even think about drinking coffee without masking its flavor. It's a shit beverage and it is gross.