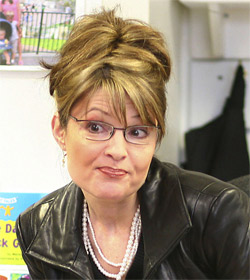 True to a point, this country has had its fill of Obama's change, but the change he delivered was timid, incremental, tax-cutting, wall-street protecting, phone-tapping sort of change. He has expanded our ongoing wars and reneged on his promise to close Gitmo and shut down CIA secret prisons. But he eased up a little on the gays. In the tooting, lurid, funhouse America that exists in the collective minds of the Sarah Palins of the world this is communism, anti-business, anti-Americanism.

She literally believes America has been destroyed. So what is she running for?

Being a reailty TV star and a blogger and a Fox News commentator and a paid-speaker and a quitter has prepared her for the job no one has yet acknowledged she may be seeking: Sarah Palin wants to be the first Post-American President. Ruler of rubble. A post-Obamalyptic feudal queen.

While the late night talk shows and the pundits are yucking it up about how much Obama wants Sarah Palin to run, I'm not so sure. She is a miserable failure as a vice presidential candidate, body snatching the McCain campaign out from under a feeble old man and turning it into a float in the Moron's Day parade, hooting and hollering about Russia and drilling the guts out of nature and lamestream medias with all the windfall class of an Ozarks porno store clerk winning the lotto and investing it all in fuckbooks. After that ended in tears she returned to Alaska and almost immediately quit being governor. 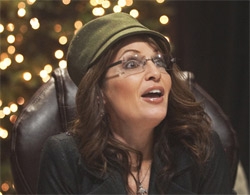 We're in the middle of world war and mega recessions, and the halfway smart guy has done a shitty job. The logical reaction shouldn't be to see if the rage-gorged remedial knows how to do it better, but this sort of thing tends to happen when you're left with a binary choice.

The hyperbolic doom of our nation we all once loved in some fleeting, self-centered way is a lot closer than we think. The body politic is slumped in the hospice, its immune system compromised, it is not going to be able to withstand the sort of virulent disease Sarah Palin intends to inject.

Stop and really think about it. America may literally elect the first reality TV star and Fox News commentator President. It's already happening in congress. Remember when congressmen used to be astronauts and war heroes? There are prophecies written about this sort of Mephistolean alignment, stories of blue turbans and jewels and red moons and faraway lands that could easily have been misread. Post-USA President Palin is coming, so quit acting like it's a joke.

Hopefully, I have done my part to stop the laughing.