Survival Of The Wittiest

The wittiest man in the world of upper class parties sipped from a glass of champagne, his eyebrow raised suggestively as always. A crowd of adoring partygoers surrounded him, leaving the rest of the penthouse apartment relatively barren.

A beautiful young heiress asked for his opinion on the state of modern food criticism. Drawing the moment out, he smiled devilishly and ran a hand through his mop of wild - yet perfect - hair. His reply was so devastating in its cleverness and so casual in its delivery that those closest to the point of impact dropped to the ground, their ears spurting blood. One man thanked the witty man for the quip even as seizures contorted his body.

Noting a sudden silence in the following moments, the wittiest man cast an unconcerned glance toward the apartment's front door. There, the usurper was making his entrance with an exaggerated bow. 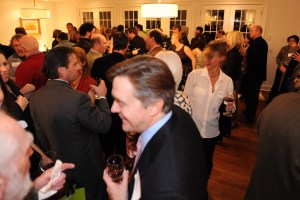 The newcomer's face bore a strong resemblance to Oscar Wilde, a fact compounded by every element of his outfit which had clearly been chosen to further the comparison. This would have been completely ridiculous if not for the fact that the usurper was so blatantly ironic about the move, which made it impossible to criticize. It was brilliant.

The wittiest man in the world of upper class parties had heard of the usurper, had listened to the tales of his growing legend, but had never met the man. Considering the elite circles they ran, it was only a matter of time before such juggernauts of clever wordplay would clash on such a fertile battleground.

As the usurper straightened from his bow, his eyes locked upon those of the wittiest man's, a playful grin pulling up the corner of his mouth.

In that moment, an inexperienced but ambitious youngster approached the usurper and tried to catch him off guard with a witty comment. It was a brave attempt to climb the ranks by taking down one of the best. Brave, but ultimately foolish.

His eyes still fixed upon the wittiest man in the world of upper class parties, the usurper whispered a devastating reply. The sheer power of the phrase's nuance blasted the young man back, turning his body to ash as it left the ground. An empty suit fluttered to the ground.

The remaining partygoers gasped, forming a loose circle around the wittiest man and the usurper. Somewhere in their reptilian brains they understood the importance of the exchange that was about to take place. This battle of the wits would determine the social structure of dinner parties and literary award events for years to come.

Neither man spoke. The two simultaneously nodded, circling one another slowly. They were feeling one another out; searching for openings, mentally preparing brilliant turns of phrase and richly layered remarks.

It was the usurper who struck first.

The wittiest man in the world of upper class parties, however, deflected the attack, shrieking "SHUT UP!"

With that, the first round had ended. Each man eyed the other with newfound respect. The crowd muttered excitedly, stopping when the wittiest man launched his counterattack.

The usurper winced, a fresh bruise blossoming across his left cheekbone, which had taken the full brunt of the clever wordplay.

Before the wittiest man could take press his advantage, the usurper stepped forward and yelled:

The wittiest man flew backwards, toppling over a loveseat. Some partygoers screamed in horror. Some reluctantly applauded, hoping to gain favor with the apparent victor.

If it had been anyone else, the battle of the wits would have been over. The wittiest man, however, was exceptionally witty. He smoothly turned his awkward position on the floor into a casual state of repose. Raising his eyebrow, he remarked:

The usurper stumbled backwards. He opened his mouth to retort, but it was too late. His form was already fading. The wittiest man's clever quip had landed true, erasing the challenger from existence.