The 40 Year Old Virgin came out in summer 2005, but the film's IMDb discussion board remains active; understandably so, from a cinematic context. There's a lot to discuss, from the mainstream comedic breakthroughs for Elizabeth Banks and Jane Lynch to the big-screen directorial debut for TV auteur Judd Apatow. However, this board's regulars - a harrowing assortment of X-year Old Virgins (where X usually = >24) and other sex-starved sad sacks - stopped mentioning the movie long ago, if they ever did so. Instead, they ask "Would you pay to cuddle with a woman?" and "Have you ever 'Facebooked' a chick?" Warning: incel inside!

okay, sure, this sounds like a fun ice-breaking exercise.

Why don't you kids ever want to spend some time with your Cool Uncle MeatFlower? 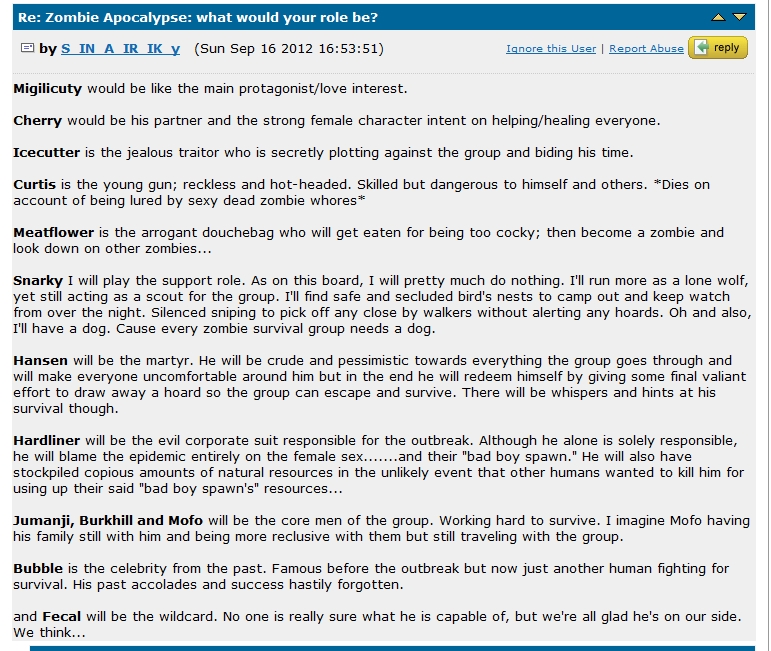 Also inspired by the TV show and comic "The Walking Dead":

See, if I didn't know this referred to board regular Fecal, the zombie-scenario "wild card," this post would seem really strange!

Hey, that story wasn't funny at all! Wait, now i get it hahaha