People in glass houses should be prepared for every visitor to jokingly offer sage advice about throwing stones.

People in House of the Dead should suffer like G did.

People in Newtonian physics houses should get up to full speed and cut off their boosters. Then they should use their rotational thrusters to quickly spin around 180 degrees. With their momentum carrying them backwards (from their new perspective) they should open up on their pursuers with controlled bursts from their plasma cannons. 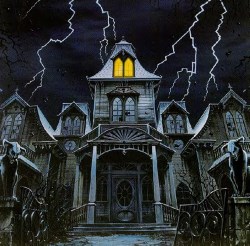 People in haunted houses should stick around, maybe throw a ball into the foggy horror portal to see what happens.

People in lava world houses should time their jump perfectly, waiting for the fireball to splash back into the magma before they leap from one stone platform to another. This is the safest way to get to the bathroom.

People in House should call their agents. The show's been off the air for a while, dude. We can have someone from the studio's security come unlock the set so you can leave.

People in log cabins shouldn't hire one of those special trucks and a crew to move their house to the top of a water park slide.

People in non-Euclidean houses should throw stones from point A to point B in the shortest possible distance, a curved line.

People in mobile houses should lay on their backs and make soft cooing noises as they watch the colorful shapes spin above them.

People in Doom House should throw their hats by slapping their cheeks.

People in virtual houses should jack into a cybernode and download the subroutine onto a mini-disk before the VR ganger squads sniff the packet and corrupt the sequence.

People in Dharma Initiative houses shouldn't let people tell them what they should or shouldn't do.

People in doll houses should calmly walk out before they start to wonder how they got into such a tiny space and suddenly find that they are stuck.

People in pizza houses should count their blessings. There are many others who are less fortunate, after all, and some have no choice but to live in huts.

People in houses where every room is a slight variation of one original room should love this update.