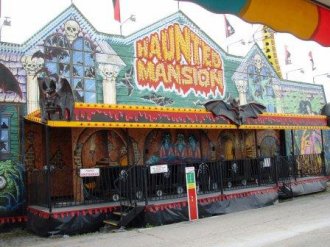 When I go out for entertainment, I prefer death-themed attractions. My favorite is Disney World's Tower of Terror, where you and fifteen other passengers sit in an elevator that slowly rises through a haunted hotel and then abruptly drops twenty stories and I think the terror is just the existential hell of being with other people. I also enjoy the more traditional horror-entertainment staple, the haunted house ride.

The ride I'm on is coasting through a concrete chamber where a man is being hunted by an axe-wielding cenobite from Hellraiser. Unfortunately the cenobite seems to be tangled in some chains hanging from the ceiling. Everyone on the train wants to come to the monster's aid, but due to diffusion of responsibility no one does anything.

On the other side of the room is a stone pillar with a clutch of screaming heads sticking out of it. I think about submitting my haunted house ride actor application - a human pillar would be my ideal job given my sexual fetish for being objectified (most people with this kink are content with metaphorical objectification, but per my art-hating disdain for metaphors, I'd prefer the objectification to be as literal as possible). However, I know that haunted house rides only hire professional actors to play their torture victims. They also require that they give method performances by actually being tortured for a period of several weeks.

The tunnels connecting the ride's various rooms are completely dark, making my thoughts - mostly deep-rooted fears and anxieties - seem incredibly vivid, to the point where I can actually see them. It's difficult at times to tell my projected terrors from the ride's horror scenes, although a few clearly stick out as products of my psyche: 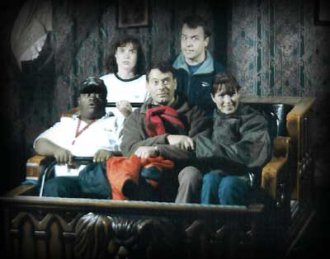 In the next room two serial killers are vivisecting a man strapped to a table with a chainsaw.

"I used to think I should make a flesh suit like Ed Gein," one says. "But then I realized I don't need clothes made from the skin of my victims to express my individuality."

"You are not your nipple belt," the other one agrees. "Well, unless it contains your own nipples."

Watching the torture scene, the other people on the ride experience the natural human response to the pain of a fellow being: an intense craving for snacks. But there are no snacks on the ride, so they resort to cannibalizing each other. I'd join them, except I'm anorexic.

To avoid calling attention to my disorder I pretend to gnaw on a severed arm, but then I spit the pieces of flesh into my complimentary haunted house ride gift bag. Whenever I'm in an awkward or unpleasant situation like this I remember the calming wisdom of Bill Hicks: Life is just a ride. Unfortunately this time I'm already on a ride, so it becomes a kind of complex recursive concept that makes my brain collapse on itself.

The ride ends in a gift shop where people can buy pictures of themselves screaming at the ride's jumpscares, or pictures of cameras taking pictures of them screaming as a postmodern commentary on the artifice of all media. I consider buying an "I Survived the Haunted Mansion" T-shirt, but it seems like tempting fate since the gift shop is technically part of the mansion and there are still plenty of ways I could die here. For instance, I might have a fatal social anxiety attack in the checkout line - a perceptual choke point where I have no choice but to look at and be looked at by other people - or a rack of key chains might fall on me. Sure enough, the latter scenario happens a few moments later.

As the rack topples toward me, I'm surprised at how unafraid I am. Real horror, it turns out, is only mildly frightening. It takes theme-park imagineers to turn life's boring violence and mundane cruelty into a truly spine-tingling experience.