Pizza Is Far Healthier Than Vegetables

Every time I eat pizza, I find myself realizing that at that exact moment I have lived longer than at any other point in my life. The tasty Italian treat is a miraculous health elixir. It’s a wonder food. I can feel its restorative properties radiating into my body as I mix the dough from scratch, make the sauce, and slice the cheese. When I remove a finished home made pizza from the surface of a 500 degree stone, the pie magically protects my hands from being burned. The gloves help. So does the fact that I use a peel and don’t really come anywhere near touching the stone with my hands, but mainly it’s the pizza magic that protects me.

As you might imagine, it makes me sick when loudmouth jerks refer to vegetables as the ultimate health food while dismissing pizza as some sort of junk for babies. They are wrong. Pizza will make you stronger, more virile, and happier than you have ever been. Vegetables will only bring you misery and ruination. There’s simply no comparison between the two. 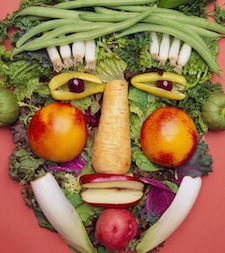 The last thing you'll see before your gruesome death.How unhealthy are vegetables? Let’s say you save up enough dollars to go down to the grocery store and buy yourself a single stalk of celery. You’ve been waiting for this. You’re in a good mood. As you begin your long walk home, clutching that tasteless stick like it’s all that you have going for you in life, you are hit by a car. It has a spinning razor sharp propellor on the front and spikes on the hood. You die. It is, in a word, terrible.

Now imagine that instead of buying celery, you order a pizza. When the delivery person shows up to your house you lock eyes and instantly fall in love. This is your soulmate. You had never believed in love or the notion of settling down with one person exclusively, but in this moment you know that the two of you will be together for all of your days. This is true happiness. Also, the pizza took like forty minutes to get to your house so it’s free.

Of course, one example is hardly enough to draw scientific conclusions, no matter how convincing that example may be.

On a completely different day you decide to have a carrot. It’s fresh, good for your eyes - at least that’s what they want you to think - and crunchy. Sounds lovely. How healthy is it, though? As you attempt to eat the carrot it spears through the roof of your mouth. Your mouth fills with warm blood and chunks of ruined flesh as the tip of the carrot punches through your skull and stabs your brain. No amount of vitamins are worth this tragic fate.

Instead, you make yourself a pizza. In your eagerness to taste its perfect blend of rustic flavors, you push the pointy end of a slice into your mouth too quickly. Does it kill you? No. It harmlessly collides with the roof of your mouth. If anything, you simply get more pizza in your bite. A nearby talent scout marvels at your ability to bite off such a large chunk of pizza. He signs you up for a movie deal on the spot. The following day, your new elite Hollywood friends share their secret immortality juice. You live forever. As the universe winks out in its inevitable heat death, you nod a salute and eat one final slice of pizza.

Spinach is supposed to be really good for you. It’s dark green. It’s nasty as hell. That probably means it’s the best possible thing to eat if you want to be in good shape, right? You decide to see for yourself. After buying a three hundred pound crate of spinach, you try to lift it without any assistance. You manage to get the crate almost two feet off the ground before your arms rip out of their sockets. Before you fade out of consciousness your desperate thoughts turn to the idea of calling 911. Even if you could push the buttons without your hands, however, that’s simply not an option. Your cell phone fell under the crate. Also, there’s a bomb in the crate and it’s going to explode in one second. Spinach claims another life.

If you buy a three hundred pound crate of pizza instead, things turn out remarkably different. You decide to use a forklift to move the crate. The process occurs without incident. Inside the crate, you discover something in addition to your pizza - a mysterious cooler. You open it and discover a preserved kidney. It’s a perfect match! You were going to die in weeks for lack of a donor, but now the transplant can be conducted.

As you can see, there is literally no scenario in which vegetables are healthier than pizza. I’m not even sure why they’re legal. Adjust your life accordingly.