Only Garfield Can Save Timbuktu

There is blood on Jim Davis's hands.

For the people of Mali, everyday is Monday. Executions, famine, amputations, murder, coups, and unrest. Things have gotten so bad militants are burning libraries, destroying (I imagine) a few computer labs filled with creepy old men and countless copies of Guinness Book of World Records. Meanwhile, nations of the world are unable or unwilling to support. They're left with no real military, no supplies, and minimal logistics. The children of Timbuktu don't even know what lasagna is.

There is only one choice. Garfield must mail Nermal to Timbuktu. This might be my flu-induced fever, but it makes so much sense. We don't need congress or the United Nations. We just need a boring gag. Boring orange cat must box up boring grey cat, address it to al-Qaeda in the Islamic Maghreb and be done with it. That's all. No one, no one, cares about Garfield, and yet here is a chance for the most significant animated moment since Bugs Bunny opened America's eyes regarding Albuquerque's confusing directions. 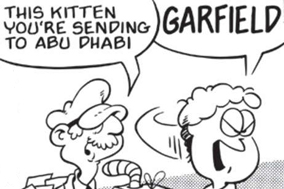 For over 20 years, Garfield has had no problem sending Nermal to Abu Dhabi, and in that time, it's grown from a desert capital to one of the world's premiere economic centers. I don't pretend to know how, I don't pretend to enjoy Garfield, but I cannot ignore facts. Garfield is a nation builder. Just one year worth of Nermal Support packages has to equal whatever the Red Cross is trying to do. It's easily outpacing those polio vaccinations.

And yet, in this time of need, Jim Davis is silent. Garfield is motionless, wrapped tight under his blanket of consumerism. It is the kind of blind eyed injustice that only a bumper sticker can capture.

work in progressAnd why has Garfield ignored a chance to mail Nermal to Timbuktu? Does Jim Davis only support oil rich countries? Is it too expensive to ship a kitten to central Africa? Doubtful. A package to Mali from Jim Davis's fortress in Muncie, Indiana is only $240-- even less if he lies and says it's media mail. They never check that stuff! Or he could strap Nermal to a drone and not ask permission because we do whatever we want with those things.