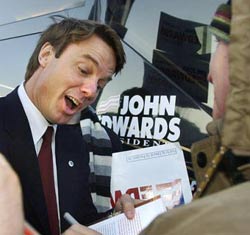 John "Son of a Mill Worker" Edwards likes to cultivate the image of himself growing up soot-faced under a shower of sparks cascading off a Victorian smelter. America's lovable chim-a-ney sweep has returned from his stint as a failed remora in the wake of anthropomorphic prune John Kerry to spread his message of magical sugary populist gum drops. He's going to take on big corporations and fight for the working man (just like his dad used to be!) all the while advancing universal healthcare and having the strength to watch his wife die on television.

Edwards and his aw-shucks apple pie baseballs blue collar routine got shredded by a waterlogged loaf of bread like John Kerry. Now he's facing the recurved talons and forward-facing eyes of the Clinton campaign. The odds you will see him in the White House are about the same as the odds you will see an actual blue collar worker in the White House, but god damned if John Edwards isn't fun to hear make words.

What the future holds: Once Edwards is reduced to well-coiffed giblets by Clinton he can get a gig recording commercial voiceovers for something hickory-smoked or four wheel drive. In the alternate reality where Hillary Clinton was tragically killed by Ron Paul's zeppelin, Edwards will give dozens of unctuous press conferences to hear his own beautiful voice as he tries to explain why he sent the National Guard to break the strike at the Boeing plant. 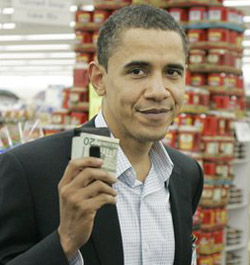 When Balack Hussein Jihad Al-Obama is giving one of his soaring speeches that amount to a concussed Rodney King's plea to "get along" it is hard to imagine a better president. He has been a relative bore in the debates, but to his credit he manages to inspire when he goes off-script and takes a question from one of the rice-white retards with entitlement complexes that populate Iowa.

"Hey y'all, black man, whatchu gonna do about ethanol? Cuz I ain't done had my prostate massaged enough on that'un by all the other candidates today."

It's too bad that when Barack Obama is faced with questions from one of the trained circus apes that pass for journalists on CNN or MSNBC he crumbles like a sandcastle under a stream of urine. It's not that Obama doesn't know the answers or is somehow outmaneuvered by a perpetually stupefied lackwit like Wolf Blitzer, it's that he is incapable of articulating himself efficiently when he's challenged. If you're watching an interview with Obama and he begins a response with, "well, look..." it's over. Obama is going to say something convoluted and it's going to prompt Paul Krugman to write another article about the magic of John Edwards.

What the future holds: Should the 70% of Americans that think Saddam caused 9/11 spontaneously overcome the crushing weight of their ignorance and elect Barack Obama, we will be treated to some of the most boring Q&A sessions ever. Obama will emerge from the paddock they keep presidents in before a press conference, deliver an impressive speech, and then offer up a rambling mobius strip of logic for every question more difficult than, "What is your favorite color?" On the plus side at least we will have exorcised some of that white guilt.

Who will give the best press conferences as president? Wait! Don't answer yet, we've got four Republican candidates coming on Friday. If you're an Iowan be sure to head to the caucuses this Thursday and try not to leave us with another embarrassment like John Kerry.