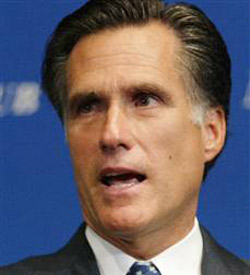 Some sort of bombardment. Perhapy of baloney!Romney is a simple-minded mega-millionaire who looks just enough like Ronald Reagan that after a few beers a paleoconservative like Pat Buchanan can work one out into a Kleenex. Shamelessly flexible, his pro-gay, pro-choice record as a governor of Massachusetts hasn't gotten in the way of his ridiculous attempts to paint Mike Huckabee as a liberal. The real core of Mitt Romney is not his willingness to spin on a poll like a top-billed stripper, it's his inability to think on his feet.

A Romney press conference will be peppered with so-simple-they-are-opaque solutions to the problems facing our nation. The controversial Guantanamo Bay Prison? Double it! Iran's nuclear aspirations? Launch some sort of bombardment! What does either of those answers even mean? I'll leave it up to my advisors!

What the Future Holds: In addition to the simple solutions, Romney will offer up the occasional tall tale to keep things interesting. So far he and his father marched with Martin Luther King and Romney, a lifelong hunter of animals such as varmints, received a fictional endorsement from the NRA. In the implausible President Romney future we can expect to hear about his personal relationship with Teddy Roosevelt, his dad being a fighter pilot who shot down a million Chinese, and the ghost he saw one time in a mirror. 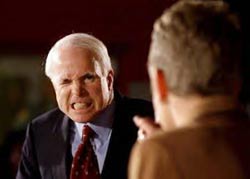 Arrrrrrrrrrrrg!McCain is the human embodiment of a defiant snarl, always gnashing his teeth in utter disappointment at the America he failed to save by crashing his jet plane in Vietnam. He has made a career out of being surly to friends and foes, openly hostile to questioners at campaign events (who he will jokingly refer to as "you jerk"), yet he is beloved by the media.

After a rough start for his "Straight Talk Express", McCain was abandoned by the press and many supporters. McCain tried and failed to restart the Straight Talk Express, but eventually both the media and Republicans awakened to the monumental unworthiness of the rest of the Republican field and came crawling back. Supporters are threatening to boost him to a win in New Hampshire, while the media is busy anointing him as the future Republican nominee.

What the Future Holds: McCain's on-again-off-again relationship with the press will grow tempestuous as senility begins to take hold. He'll begin a press conference on message about some godforsaken rock in the Middle EAst teeming with brown people in need of some explosions, but he'll end by screaming in Vietnamese and throwing the podium at Helen Thomas. Expect McCain's VP to take over most of the duties by year two while McCain, wheelchair bound from a stroke, pickles himself with cheap rye in one of the secret chambers off the Oval Office. 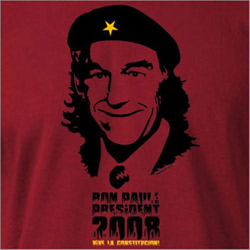 From each according to his ability, back to each in a sort of circular or boomerang motion.Dr. Ron Paul is a stammering libertarian grandpa with an earnest delivery, a failing grasp on reality and a legion of devoted Internet followers. Paul's supporters are an unevenly horrible collection of civil libertarians, gun nuts, white supremacists, amateur lawyers, and Republicans just crazy enough to support Ron Paul, but not so crazy as to support a Democrat. Oh yeah, and the coveted conservative pimp demographic is 100% behind him.

His halting rhetoric appeals to the sort of intellectually bankrupt home schooled white kid who thinks that because mom taught them science out of a book with an angel on the cover there should be no Department of Education. These are the same sorts of people you hear arguing that the civil war wasn't about slavery or that revenue would actually go up if we abolished all taxes.

What the Future Holds: Impeachment. Ron Paul is horrible at conveying his ideology to anyone the least bit skeptical. He nearly puked with shame when George Stephanopoulos offered to bet all of his money that Ron Paul would not win the nomination. Paul was mercilessly savaged by hideous Mr. Potato Head lookalike Tim Russert on a recent episode of Meet the Press, I can only imagine what sort of horrors would be wrought by a pointed question from the likes of David Schuster. My theory is that Ron Paul would gasp as if he has just been robbed by one of Washington's fleet-footed blacks and then cower behind the podium until everyone left the room.

A taste of things to come? Not likely. The Republicans are squaring off against a Democratic field so resurgent that they actually managed to get out the youth vote in Iowa and nominate their best candidate. That's like seeing a sasquatch climbing up the ramp of a UFO.

Then again, if there is a way to fuck everything up and lose horribly, the Democrats will find that way.