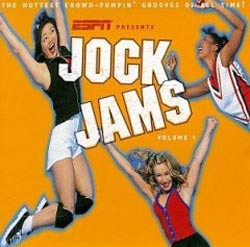 Salvation or Damnation? The final Jock Jams album was a distillation of the preceding seven discs entitled Jock Jams: The All-Star Jock Jams. It was released, with little fanfare, in November of 2001. It barely cracked the top 200. The impossible had happened: America had over-pumped.

I could blame it on September 11th or a contentious presidential election. I could point the finger at the stock market, the dot com collapse or some other unfortunate event, but I know it isn't true. The truth of it is we pumped ourselves into such a terrifying frenzy that without the release valve of victory we ran ourselves to death.

Americans had that lousy feeling of lonely despair and realization the only the last man on Bourbon Street the morning after Mardi Gras, confronted with the debris, can truly understand. We were hoarse from screaming, sore from throwing beads at tits and hung-over beyond belief. We staggered like a sweaty ghost down that deserted boulevard, aware of the heaps of garbage and the raw stink of spilled beer and hurricanes. The street sweepers just looked at us in our Hawaiian shirt and shook their heads.

The 21st Century has been an unpleasant dawn in the real world for the United States. The Jock Jams were like bitter cat turds in our ears in November of 2001 and they're twice as unwelcome now. I could see cheerleaders thrusting their hips to "Jump Around" at a Bears Superbowl game and my level of pumped-upedness would barely rise.

Have we lost our ability to become pumped up? Have we exhausted our supply of reckless and pointless enthusiasm?

I bet even that didn't get you pumped up because you're thinking about IEDs and soldiers with plastic chins or something at Walter Reed. If we had invaded Iraq in 1999 it would have pumped us up so much we would have screamed non-stop 24/7. There would have been cheering at the TV, cheering on the phone, cheering at the dinner table, cheering alone in our offices and doing the wave with no witnesses but the walls of our barren apartments.

When the first tank drove into Baghdad a general would have jumped off the front and spiked a football into a statue of Saddam while fireworks went off and a formation of F-16s flew overhead. The Iraqis would have greeted our troops with "America 3:16" signs and the only explosions after that would have been pyros as various units busted through paper logos or drove past giant inflatable helmets. The wars in Afghanistan and Iraq are just two of the pumping up opportunities that have been squandered in this lifeless, gray and grim post-Jock Jams world.

Only time will tell if we will ever overcome our pump fatigue. I'm an optimist. I have faith that someday "I See You Baby" will once again ring out over our cities and battlefields. Americans will forget their troubles and feel free to become totally, completely, unethically and violently pumped the heck up.