Revenge of the Poors 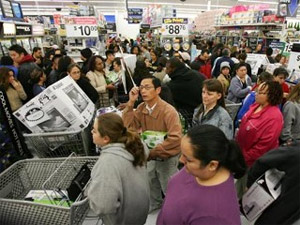 Poors do not have money but they are always buying huge quantities of things to eat and break in a month.I am starting to suspect that poors know something I do not. There are just so many of them!

Or so I thought. If the growing ranks of the poor are any indication, being poor is not so bad after all. Not even the richest among us can avoid the poors thronging our streets and palisades and I suspect their motives for recruitment.

I initially thought it was a case of safety in numbers; protection from coppers and the rough beasts of the streets. The herd seeks to protect itself. I had it all wrong. The poors are too numerous to be a purely defensive force.

Poors are everywhere, but why!?

They can be seen grouping in yards and in car lots, gathering 'round their burning compost, perhaps sharing tales of doing their poor activities. I imagine them discussing their preferred variety of canned vegetable, their favorite contraction, or how to safely turn a corner in a van. Perhaps on the day they receive their checks from the government they pool their money and buy a hamburger pizza cooker or a whole dog. 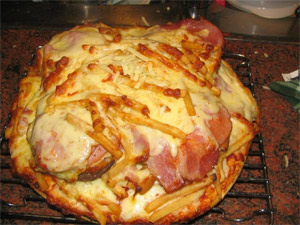 Is this something poors do? I have heard they have a flavoring they put on everything called "ranch." These are men and women who wear cowboy jeans and call each other by first names like "Paco" and "Bart." Their ways are as inscrutable to me as a worm's are to a helicopter.

There is only one possible conclusion to be drawn from the alarming increases in poor activity. They are up to something! Lucky for us, they are starting to show their hand.

It began with James O'Keefe, that bright, Young Turk who revealed the sinister motivations of the group known only as ACORN. O'Keefe caught this organization of well-known poor collaborators red-handed spreading the poor agenda. I do not recall the details, but it was horrifying. With the help of a few game congressmen, O'Keefe cut ACORN off from the government teat.

Now ACORN has taken its revenge. Emboldened by the growing ranks of poors, ACORN had O'Keefe arrested on trumped up charges involving ridiculous poor man costumes. Supposedly, he and his lads willingly dressed as poors and got up to no good in the office of corrupt Louisiana Senator Mary Landrieu. 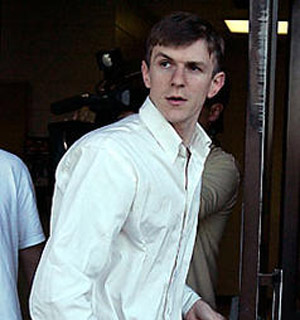 Hero O'Keefe, stripped down to shirttails like a churl by the ACORN thugs.I believe they are accused of attempting to illegally operate the telephone of a federal official. I am sure he will be free soon enough, but the imprisonment is a disgrace.

The next blow fell soon after when I learned that J.D. Salinger had died. His lying actor son claimed "natural causes," but to lose Salinger and Updike in the same year is a dreadful harm to the cause of affluent, entitled Americans everywhere. It is such a dreadful harm it can only be murder.

I remember the moment I heard the news. I was reading the Weekly Standard's Big 10 List of Sectors to Deregulate and Kudlow Report was on in the den. Suddenly, one of the news girls broke in with news and as soon as I heard her say "reclusive" I knew Salinger was gone. I wanted to vomit, but all of my copies of the Atlantic were in the cellar.

My only consolation throughout all this hardship - the O'Keefe imbroglio, the Salinger assassination, the many poors I was forced to see out my windows - was the courageously defiant headshake of Justice Samuel Alito during Mr. Obama's decorum-shattering State of the Union harangue. That heroic rebuttal, delivered on live TV and straight to the face of the tyrant, has inspired me to begin developing strategies to counter the poors. 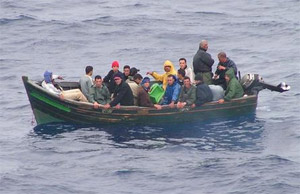 Hardly a barge, but it is a start. Quickly, fire the charges, I can smell the stink of bar soap from the picture.Poor Barges - Assemble a fleet of scows and rusty river barges past their prime. Load them up with the poors and tow them somewhere out of sight. I would suggest over the horizon. Another option would be to set them adrift in some of those unsightly offshore wind farms. Why not kill two birds with one stone and placate those awful greenies always braying for us to do something about the environment. Sink the poor barges and form artificial reefs. I can only hope the poors have not sucked down too much mercury in their time for the delicate tastes of the coral.

Exports - We used to import our labor in this country, but with Obama's threatened regulations causing another run on the market, perhaps it is time to send some of these useless wretches on their way. They can even remain US citizens. I have read about an island paradise for the poors called Saipan, where everyone gets to work eighteen hours a day and never have to worry about being rich. 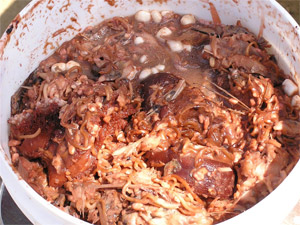 Gomorra sailors call it "long pig chum" and we will call it silage.Conscription - I am as much the pacifist as anyone else, but certain economic conundrums can only be resolved by a massive war. The fastest way to get poors out of our way and being productive would be to conscript them into military service. I have been reading about something the communists developed that might work here. No, not communism you imbeciles, it is called a "human wave attack" and I think it is just what we need to finally rout those Taliban bastards. Now what would you call a commissar in a democratic society? I will call and ask Erik Prince if he has any suggestions.

Reverse Al Qaeda - All this talk of war and violence has my blood up. I am sick and tired of Al Qaeda and I think maybe a taste of their own medicine is in order. I am sure the boys at the Company can cook something up to convince our poors to suicide bomb the Yemeni and Saudi poors. Maybe one of those job export outrages that worked so well against the Mexicans.

Silage - I have been told by my friend at ADM that farmers are no longer allowed to feed ground up cattle to other cattle because of the usual government red tape. Farmers are allowed to feed their cattle something called "silage," which is the waste material from farming. My suggestion is simple: categorize the poors as silage.

These ideas are still germinating and I am always open to suggestions. I will be submitting my list to Human Events through my niece, Elspeth-Bronwyn, who knows how to use computer mail. Bear in mind, my dear niece is not poor at all. Computers are something even well-heeled folk of a certain age are using.