With the mouse on his shoulder, Santa conducts bizarre animal experiments. 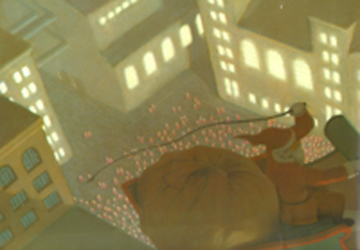 It is commonly thought that reindeer cannot fly. Santa has proven they can in fact do almost anything if they're lashed savagely enough with a three-pronged whip, though replacements are required so constantly that the species has become quite endangered.

Animals are humiliated to lower their resistance to Santa's whims. For example, ponies are placed in jobs for which they're poorly qualified, then brutally shamed for failing.

Santa's minions force dogs to wear degrading costumes, particularly during the holiday season. This tinsel-decked pup escaped one of Santa's compounds and immediately warned the nearest beasts, without even pausing to remove his burdensome adornments. 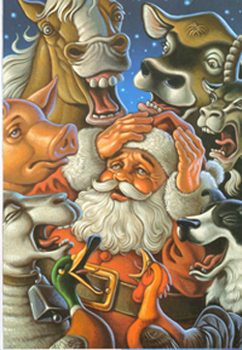 Rallying in support of their mistreated brethren, the animals surrounded Santa. He lacked the proper spacing to extend his fateful whip. The mouse, either cowardly or traitorous to his cause, was nowhere to be found. The vigilant beasts collapsed upon him with malice.