Dear Max, they gave me the letter you sent about the last Reading Time. I enjoyed the words, but I wish you were here to say them mouth-way. I miss how you would wave to me, and then you would say "behold, the gnarled hand of time," because you use that skeleton hand for tasks like waving to save wear on your real hands. Why are you so slow in getting to this place? Have you started using bones for walking-feet as well?

They gave me a different partner because you weren't here, and he was a mirthless fellow who gnawed my toes. Also, I had to be a "spy," which is nothing like a hero. You do not get to use powers and kill aliens. You just watch villains and become confused. Max, I hope you will understand what happened better than I did. 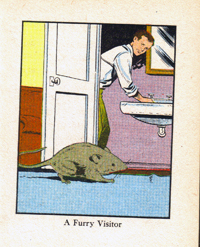 This is my partner. The general told me "you'll be working with Pilfred, he don't talk much," then he laughed, probably because Pilfred is a silly name. Our duty was to watch what this man does. He did a lot of bathroom actions, and he did them the same standing and half-standing ways the generals do, so I don't think they learned any True Lessons. 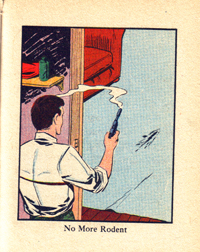 The man shot Pilfred with a gun machine! I was hiding behind the food-coldener when it happened. He didn't make a sound. The general was right: Pilfred never had much to say. Once he looked right at me and remarked "how delightfully common," but I forget why. 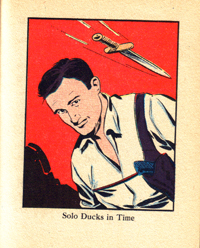 I did this! I threw a knife! The general yelled "Do not engage the enemy," but I was revenging Pilfred. He was not a friend to me like you, Max, but he didn't deserve a death, not yet. I did not hit the man, but throwing knives at people is hard. One thing I have done that's a lot easier is to pick up a person and throw him at a knife. 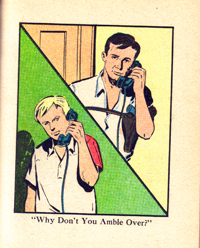 The man looked for me, but eventually he forgot his search and called his friend. He talked lazy-like, as if there was nothing extraordinary about slaying a rat-beast and dodging death at the point of a heroically thrown blade. I will never ask you to "amble over," Max, because that is a slow way of moving for slugabeds like this man. 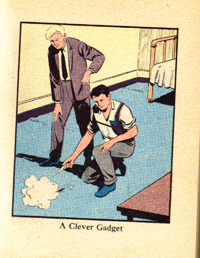 The Yellow-haired man called the Pilfred-murderer "Solo." Solo and Yellow used a cloud-making device. They created lots of cloud-puffs and then it started raining in the room, and I was sure they had succeeded at an evil plan to control the weather! But the general told me some hotel rooms make rain when there's smoke. This is a fancy way to help people on a vacation from smoky, rainy places feel like they're in familiar surroundings. 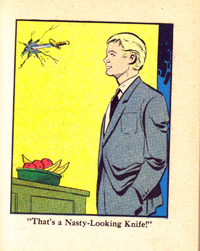 "Nasty-looking" means "superior grade" in Outside-world talk. Sometimes when I make aliens into half-people or turn them into twisty-bodies to wring out their vile secrets, the generals tell me the praise "that's a nasty-looking piece of work," and I know I have done a great thing. But this was a bad man, so his nice-sounding words said to me "that was a superior-grade failure. This error benefits our wicked cause." When I heard this, I wanted to throw the knife at his fruits and make them turn into colors and splash-juice and death. 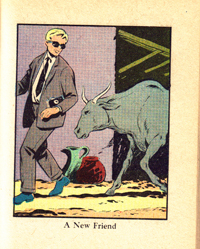 The Yellow-head man now has an animal partner, too! I think he must be a spy for the generals. A True Lesson I have learned about spies is that they're usually Double Spies.