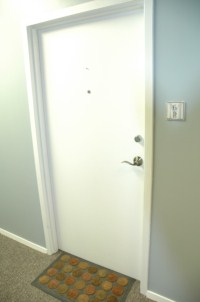 HELLO!!! I hope this note on your door finds you well. We haven't yet met and I have not lived in this apartment complex for very long (3 weeks) but I want to be the first to congratulate you and say Good Going on your new rental home!! I live in the unit next door and will be your neighbor. The lady who lived here before you had an episode because a cop car ran over her naked husband and she started taking it out on everyone else by letting him soak his leg casts in the communal pool. Talk About Bio Hazard... We all swam in the pool with him wearing his casts the first day but almost everyone who drank some of the pool water had very bad dreams. For example in mine I saw a teenager throw some trash on the ground so i said "Hey" and he turned around and his head was a fly's head. (???) Also when he got out of the pool he sat next to the pool to let his cast water drip down back into the water, in a wheelchair, and the wheelchair was previously also in the water because he wanted to sit in it but who knows what his body was up to in that seat. 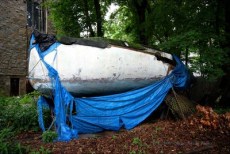 Things You Should Know: There is a storage shed behind the garage, and behind the storage shed there is an old boat with a tarp on it, and under the old boat lives a gang of sickly cats meowing and groaning and eating out of a big tub of old yogurt which is only making them feel worse but you can't take it away from them or they hiss and get mad. The best thing to do is to drive your car out to the back and gently bump the parked boat with your car's bumper so that it rocks back and forth and the cats flip out and leave. I don't know where they go after this but they almost always come back the next day so only do it right before you have some company over or family members who want to come see your cool new place. Warning: Wasps In There Too

THE POLITEST MAN IN TOWN!!!!