All you wanted was fifteen-hundred dollars worth of wrought iron candle holders and puffy sticker alphabets for your scrap book, but Hobby Lobby talked you into a 6-month same-as-cash deal. It seemed so easy. Just sign up for their Visa. Worry about the payments later. Then the accident happened. Your wife's new Chinese corpse arms needed a lot of surgeries and you needed expensive therapy to overcome your jet ski nightmares. Paying off your debt to Hobby Lobby was a low priority.

Two years later you receive an envelope in the mail. It doesn't look like all those letters from Hobby Lobby Credit nagging you to pay up. This looks official. You tear open the envelope and are horrified to find a court summons demanding you attend a hearing at an odd commercial address in Erie, Pennsylvania. Before you know it a judge is gaveling you to silence, demanding you stop chewing gum in the courtroom, and ordering you to pay your debt to a company called Unicredit America, Inc.

This isn't a hypothetical; this really happened in Erie, PA.

It was decorated like a courtroom, with dark wooden furnishings, Agent Kelly Kelso said. And in the front of the room, behind a raised bench -- like where Dunlavey was seated -- sat a woman all dressed in black.

Among other things, the company agreed Tuesday to stop collecting debts that have been entered as judgments against Erie County residents, and to stop sending letters threatening consumers with arrest if they fail to respond to the company's subpoenas to attend "depositions" in its courtroom.

In addition to the moratorium, a civil suit seeking damages against Unicredit is pending. It's all very unfortunate, because Unicredit's mock trial trickery is one of the best ideas of the free market since the money-changers conspired to nail Christ up like a tetherball. The potential for agile businesses to subvert bureaucracies is nearly limitless. 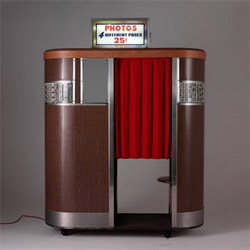 Vend-a-DMV. Small booth placed conveniently right outside the real DMV. Insert ten bucks, enter your information into the computer, and sit in the booth while your picture is taken. Add an extra five dollars to receive a clergy or handicapped provision. You can play video poker while you wait for your license to be developed. Sure, you might get in trouble with the cops if you get pulled over, but don't worry, the same company that owns Vend-a-DMV also owns the fake-real-prison you're going to be sent to for vehicular manslaughter.

Fake FDA inspectors. Trained improv actors are ready and waiting to have a look at your hog bunging machine. What's that? Listeria on the innards outflow nozzle! Ha ha, don't worry, this guy was a Groundling. He doesn't know listeria from a banana, but if you give him an animal, a vacation spot, and a famous actress he will construct a two or three minute skit to amuse your line crew while your FDA approval certificate is printing.

Center for Disease "Control." Lease an American Legion Hall, dress everyone in trash bags, cover the bathroom with tinfoil and prepare to receive a level 5 sample of African blood fever. The UN says don't let it get into the water supply, but you're good buddies with Lou Pardo, the guy in charge of the fake water and sewer department. You're pretty sure he won't mind you flushing the whole thing. It smelled terrible.

There is plenty of room for you in the newly opened field of quasi-privatization of government. Don't wait around for the fake legislatures and fake schools to crowd you out. Get in on the ground floor by taking real money for providing fake services.