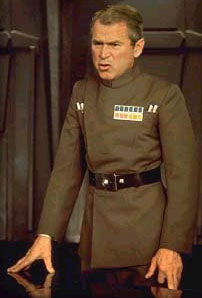 President George Bush recently revealed that a shadow government has been operating within the US that would be able to take over all essential national chores should the regular government be wiped out by terrorists, blown up by atomic death rays, or devoured by alligators. Since no information has been revealed about who the shadow government consists or what the full extent of their powers are, some are already drawing comparisons to secretive organizations like the Illuminati, Tri-Lateral Commission, Friars Club, and the numerous Dungeons and Dragons player groups vying for global domination. If you let Bush explain it, then the shadow government is nothing more than a safeguard ensuring that we still have something to bitch at in the event enthusiastic foreigners blow up our regular government. A tragedy such as that would not only render my 12th birthday wish true, but our nation to a standstill. But Bush is playing modest because the shadow government is so much, much more!

One thing's for certain, and that would be that the shadow government is just what we need. Only we need it in full effect, widescreen, and with director's commentary. Forget the regular government! Send Bush and all the other folks home. This is America, and we demand the very coolest of everything. The shadow government oozes cool like Arthur "Fonzie" Fonzarelli would ooze cool if you stabbed him repeatedly in the chest with a switchblade. Wait, he'd ooze blood. But he would probably be really cool about it, so it all works out in the end. Imagine how cool America would be if it was run by the shadow government. Go on, imagine! The shadow government just sounds badass, thus making all of us surrogate badasses. 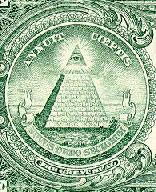 The shadow government has no connection with the ancient aliens that built the floating eyeball on top of the pyramids.

After awhile, the shadow government will have no choice but to start addressing us. But no way will they be like our regular boring government. Instead we will have the Shadow President, a dashing young man who wears all black and a partial facemask that covers up his eyes, kind of like Robin but without the whole gay why is he hanging out with that grown man in a bat suit innuendo. Oh, and the Shadow President will wear a cape. That, and he will be flanked by an assembly of men wearing similar outfits, except they will be wearing complete masks with big red question marks sewn on the front. Sorry Secret Service, you just aren't secret enough.

When it comes time to do speeches or address the nation, instead of the usual drab and unadventurous settings of capital buildings and what not, the shadow government will conduct them in dilapidated and dimly lit abandoned warehouses. You can bet that smoke machines won't be far behind either! Eerie smoke and fog will be a trademark of government telecasts. Maybe, for dramatic effect, they might also bust out a Halloween sound FX record to play in the background. That would be completely boss. Just to be even more cool and mysterious, they won't tell you when these addresses are going to be, either. Your TV will just turn on or whatever show your eyes are affixed to will be replaced.

The Shadow President will of course be a family man. So his wives, the Shadow First Ladies, will always be near by. They will all be identical twins clad in full leather suits. Naturally, they will be quite deadly with the various martial and martial-like arts. When they speak, they will all take turns delivering words from the same sentence. Mostly they will just give riddles and ominous predictions about glass ceilings falling and nonsense like that, so they won't get questioned very often. In fact, if you question the shadow government, you're as good as dead, and that's not very good at all. Unless you're French, because you're better off that way.

Of course none of what I've written is for certain. It's just my own personal hopes for the future of America and the many other places taking up space on my globe. We really don't know a damn thing about the shadow government. What we do know is that it's a group of about a hundred individuals living underground in Cold War era bunkers. Who they are is a mystery, as they're not allowed to reveal their location or identities to anyone. For all we know, our government may have even made a pact with subterranean mole men. But as totally radical and gnarly as that sounds, it's just a theory. We don't know anything and we probably won't until it's too late and either death is close, or another horrific all-star telethon has been held.