Lately I have been annoying people who happen to live in our apartment, from my girlfriend to our cats, to possibly dust mites, with Marvel Versus Capcom 2. The game is extremely fun, but looking at the screen while I'm playing nauseates even the centipedes that infest the walls thanks to all of the flashing lights, words flying across the screen, and fast-paced crazy-fu action. This might not be quite so bad if it weren't for the painful soundtrack that would feel more at home in a late seventies beach-themed movie where a girl in a bikini sits on a cream pie. The music, the flashing lights, and the announcer who enunciates everything as if it is a sarcastically happy insult about your parentage combine to make the game seem, to the uninitiated, like a strobe light with a stereo playing a tape demonstrating raccoon calls strapped to the top.

I blame my heritage for my ability to see past these things and really enjoy the game. I was raised on flashing lights and sounds effects that ranged from bloops all the way to bleeps. I cut my teeth on Double Dragon, weened myself from that with the help of Street Fighter and its endless sequels, fell in love all over again with Mortal Kombat II, and graduated 3D fighter university with degrees in "Tekken", "Soul Caliber", and "Dead or Alive". When I eat lunch I imagine that I'm restoring my health bar by up to 25 percentage points. When I wake up I immediately try to assess whether I should roll forward, backwards, or perform a counter to halt an inevitable low-kick. When I'm walking to my car I look for a lamp post or trash can that might be hurled at an attacker only to blink a few times and then vanish.

My point isn't that I am a master of fighting games, I've been beaten by far too many twelve-year old Asian kids hunched over a game at the arcade to claim that, it's that fighting games have infected my life and my way of thinking. Their logic appeals to my simple mind. Unfortunately, my mixture of incredible reserves of misguided creativity and general love for bad ideas has persuaded me that I could do a better job with the genre than anyone else has to date. Every waking moment my mind is practicing a hadoken of the soul and I think the time has come to channel this energy into something more creative than trying to flying bicycle kick my cats into an imaginary pit of spikes. Therefore I will be taking a hiatus from Something Awful for as long as this project takes or, more likely, until I lose interest. This should occur some time around Wednesday evening when I realize I need to review a Hentai game. Until that time comes I will be entirely half-assed devoted to thinking about working on my upcoming fighting game masterpiece which I have entitled "Comic Strip Characters Versus Sitcom Characters 3: The Sleeper Has Awakened"

I don't expect many people to buy the game other than videogame collectors and possibly drunks who accidentally spill jelly on it, get it stuck to their pant leg or sleeve, and then are forced out of embarrassment to buy it when it sets off the alarm. I do hope that a few Something Awful readers are so loyal and wealthy that they simply can't resist the purchase or are prone to wandering around the local Gamestop with a blood alcohol level of .50 and an open jar of jelly. To reward these especially big fans of Something Awful I am offering the inside scoop on the characters that I am developing for the game. Be forewarned that I was not able to secure very good licenses for the characters in the game, but I'm proud all the same of what I have accomplished. In fact, it was originally going to be titled "DC Versus Namco" but I couldn't get any DC or Namco licenses.

Balki Bartokomous
Origin: "Perfect Strangers"
Blood Type: AB Negative
Background: Balki "The Raven" Bartokomous was part of a covert anti-terrorist organization called Cell-8 operating out of the Ukraine in the late eighties. While fighting in Afghanistan the helicopter he and his squad were in was shot down by a Stinger missile. He and one other man, Andy Capp, survived the crash. Capp disappeared but years later, after immigrating to America, Balki discovered that Capp had betrayed Cell-8 and he swore vengeance against him. When Balki discovered that Andy Capp had entered the Ultimate Battle Championship Death Tournament being held in the Otherplane by Jughead he had no choice but to pursue him and enter himself. Balki fights to destroy Andy Capp but will not hesitate to defeat anyone who stands in his way.
Special Attacks: Rolling down to forward and pressing the strong punch button will call in a helicopter for air support that will strafe Balki's opponent. Rolling forward to back and pressing strong kick will unleash the Spinning Red Star Kick. Keep pressing strong kick to keep Balki aloft and inflict more hits in the combo.
Deathalities: Press down three times, up twice, then roll forward to back and press weak punch to activate Balki's Screwdriver Deathality. He will snap the neck of his stunned opponent and proceed to twist off their head and then kick it onto a spear.

Origin: "Andy Capp"
Blood Type: O Positive
Background: Raised in the steppes of the country of Georgia, Andy Capp learned the ancient arts of Jeet Kun Do from a strange Siberian monk. He used these skills to gain entrance into the anti-terrorist agency known as Cell-8, but his loyalties were with the international terrorist organization Scorpion Legion. Lead by the enigmatic Jughead, Capp betrayed fellow Cell-8 members including his squad leader Balki Bartokomous. When the helicopter carrying his squad was shot down in Afghanistan, Capp escaped to America, unaware that he was being hunted by Balki. Jughead appeared from the Otherplane and told Capp that he would be holding a tournament to the death. He ordered Capp to compete in it so that he could lure Balki into a carefully laid trap.
Special Attacks: Rolling back to forward and pressing block twice will cause Andy Capp to grow to double his size and gain the ability to shoot Flame Skull Slave Souls from his mouth with the strong punch button. Tapping forward twice and pressing the medium kick button activates Capp's Ice Dagger attack, one of the most powerful ranged attacks in the game.
Deathalities: Flame Skull Slave Soul Powerup + up, down, and up followed by low kick. The giant Andy Capp will unhinge his jaw and devour his opponent and then several dozen femur bones will emerge through his pants and bounce around the screen.

Origin: "Family Matters"
Blood Type: Unknown
Background: Carl Winslow is a cyborg created by the United States Government to infiltrate Scorpion Legion. He rose through the ranks of the terrorist organization and quickly came to the attention of Jughead who selected him to fight in his death match tournament. President Bush knew this was his one chance to destroy Scorpion Legion so he ordered the DARPA commander to upgrade Carl Winslow's fighting capabilities and install a special neutrino bomb that would banish Jughead to the Otherplanes forever. Now all Winslow has to do is fight through the other competitors in the tournament and challenge Jughead for the ultimate prize; America's Freedom.
Special Attacks: Press down seven times, roll front to back twice, and press all three kick buttons simultaneously to detonate Carl Winslow's neutrino bomb. This attack inflicts massive damage but also heavily damages Winslow. Winslows hands can also transform into boomerang blades that can be launched at opponents by rolling forward and pressing strong punch. If you fail to catch the blades as they return you will not be able to use this attack again in the match.
Deathalities: Roll back to forward and press weak kick three times quickly to activate Carl Winslow's Kiss of Death Deathality. He will bend forward, raise a leg coquettishly behind him, and kiss the opponent on the lips, then suck them into his mouth and shout dozens of femur bones out of his eyes. If this Deathality is performed on the acid volcano level he will kiss them and knock them into the acid volcano.

Origin: "Archie Comics"
Blood Type: Liquid Magma
Background: Jughead rules over the Otherplanes from the ancient citadel of Deadliest Keep where he is secretly training an army of ninjas to invade the Earthplanet. His latest contest is merely a diversion to occupy the earth's greatest warriors while his troops begin the invasion. Jughead is cold and calculating and plans to kill all of those involved in the competition himself if the other competitors don't get to them first. He wears a magical suit of armor, his flesh is made from rock, and his blood is red hot lava. He also has four arms and can turn into a dragon in the second round of a match. He also cheats by repeatedly doing the same combo over and over that is impossible to execute if you are using a controller.
Special Attacks: To do Jughead's Dragon Diamond Fire Punch Kick Sword attack you will need to grow four additional hands and somehow find a way to hook up a fifth controller to your console. In other words, give up now. But if you want to you can do his fire blast attack that is the slowest-moving projectile in the entire game and does slightly more damage than a weak punch. You can perform this special attack by pressing forward and weak punch at the same time.
Deathalities: Jughead subsists on the souls of the living and is always hungry for the screaming spirit of a mortal. While your opponent is stunned and awaiting a finishing blow press forward three times and hard kick plus hard punch. Jughead will reach into their throat, pull their brain out of their neck, and then pull their soul out of their brain and eat it. Then a whole bunch of femur bones will come flying out of his head for no particular reason.

There are many more characters awaiting your commands in the Otherplanes! Do you have the guts to travel there and battle them? I hope so, because I am going to be working almost 24/7 on this game to complete it before Wednesday rolls around. Okay, maybe not, I have a whole lot of Marvel Versus Capcom 2 that I need to play during that time.

Brave soul Psychosis has once again subjected himself to something truly terrible so that we all might be spared. This man, this noble soul, has played and reviewed the game GORE and he should be blessed by Allah! 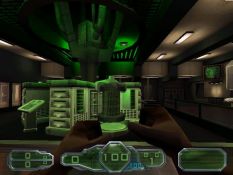 You know it’s going to be a great game when you spawn weaponless in a square room next to a giant glowing espresso machine, shortly before grabbing a gun that conveniently got left on a nearby table and running out of the room to assist your white-shirt-wearing brethren in a battle against the evil red-shirted invaders. Sadly, that is the high point of the game, since as soon as you encounter your first enemy the whole thing degenerates into an embarassingly sloppy mess of a first-person shooter that somehow manages to be even more pathetic than Extreme Paintbrawl 4.

I didn't believe him at first when he said it was worse than Extreme Paintbrawl 4. Unfortunately, it's true, but on the other hand you don't have to take my word for it DUH-DUH-DUH! The butterfly in the sky agrees that GORE is one of the worst games ever made!