Thanks to the internet, it's now common knowledge that fast-food chains have "secret" items they don't list on their menus but will make upon request. Some of the most popular secret menu items include Arby's Meat Mountain, Burger King's BK Club and McDonald's Mac Daddy (a Big Mac with a McChicken in the center and apple pies for a bun). As exotic as these sandwiches sound, however, they're really just the tip of the iceberg lettuce on the salad of mystery that is the Secret Menu. The next time you're at a fast-food restaurant and feeling adventurous, try ordering one of the following ultra-secret items. 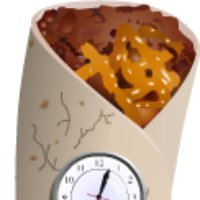 This quantum-physics-defying burrito is perfect for Taco Bell customers who can't decide what to order but are also in a hurry and/or don't want to hold up the line. Its crispy flour tortilla wrap is actually a temporal wormhole that teleports one's consciousness back in time a la X-Men: Days of Future Past to the moment they placed their order. By purchasing the Time Burrito ad infinitum, one could theoretically take an eternity to decide what to eat - every fast-food customer's dream! If you've ever felt like you were standing in a Taco Bell line forever, it's probably a residual memory of the customer in front of you repeatedly ordering a Time Burrito and resetting the space-time continuum to hide their chronic indecision. 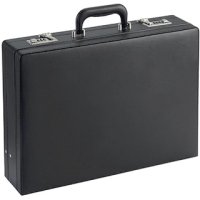 McDonald's customers over 30 can request this unique Happy Meal geared toward adults. It comes in a briefcase and contains a gluten-free salad, a bottle of antacid tablets and a folder of important tax documents. For a toy, one can get a miniature plastic iPhone, jet ski or home entertainment system. The price of the Adult Happy Meal ($4.29) can easily be recouped by posting an unboxing video of it on your hobby-themed youtube channel. 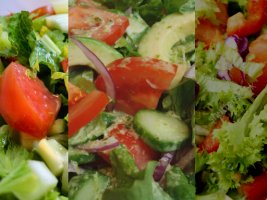 Proving that fast food can be art, this complex and ambitious salad tells the story of the fall of man in three acts. Its left third, an Edenic paradise of crisp romaine lettuce, freshly sliced heirloom tomatoes and zesty apple cider vinaigrette dressing, symbolizes Adam and Eve in their pure and innocent state. The middle third, a corrupted Babylon of iceberg lettuce, processed carrot sticks and Newman's Own Thousand Island Dressing, represents the birth of sin and worldly pleasures. The right third, a hellscape of shredded lettuce, moldy cucumbers and Wish-Bone Buffalo Ranch Dressing, shows the eternal damnation that awaits all sinners. While some have called this salad heavy-handed and didactic, its impressive scope and painstaking detail have secured its legacy as one of the most important salads of the 21st century. 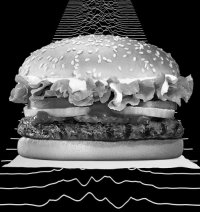 Gloom and despond permeate this lesser-known cousin of Burger King's Angry Whopper. One bite and you'll sink into a hopeless melancholia as you ponder life's unanswerable questions: What happens when I die? Is there any point to existence in a universe doomed to oblivion? Why do I feel empowered by those touchscreen soda dispensers when I still just end up getting Diet Coke? Customers under 20 will probably prefer the Sullen Whopper Jr., which inspires a deep, brooding resentment of unrequited crushes, household chores and not getting a ride to the Black Veil Brides concert.

Tray Liner of the Dead (McDonald's) 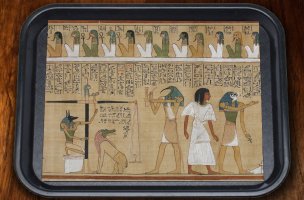 Between heart attacks, food poisoning and stray bullets from drug-related disputes in adjacent booths, the chances of dying at a McDonald's are relatively high. The only thing worse than dying at a McDonald's, however, is not being prepared for what awaits you in the next life. Fortunately for eschatologically impaired McDonald's customers, there's the Tray Liner of the Dead. A modern-day version of the gold tablets Egyptians buried with dead pharaohs to guide them through the underworld, this tray liner contains all the maps, instructions and incantations a deceased soul needs to find its way to the heavenly paradise known as McDonaldLand. One passage, for example, warns against drinking from the soda fountain of forgetfulness:

You will find in the Fry Forest a soda fount on the left, and standing by it, a golden-brown McNugget tree; Do not approach this fount at all. You will find the other, from the lake of Memory, refreshing Dr. Pepper flowing forth. But Mayor McCheese is nearby. Say: "I am the child of Earth and starry Heaven; But I am parched with thirst and I perish; but give me quickly refreshing soda flowing forth from the lake of Memory."

The Tray Liner of the Dead can be identified by its hieroglyphics and gold border. Beware of a similar-looking tray liner with a silver border. It contains false directions that will lead your soul to Mc'tlan, a realm of eternal darkness ruled by the gaunt, leering archdemon Mac Tonight.