The Simpsons Debate When a Fan's Life Jumped the Shark

In a drastic change of format, the 28th season of Fox's long-running animated comedy The Simpsons will consist entirely of the Simpson family discussing the lives of their fans. Each episode will be devoted to a different fan, with each of the Simpsons opining when they think that fan's life started to go downhill. Here's an exclusive excerpt from the script of the season premiere, "Greg Pendleton."

Homer: It's obvious that Greg's life jumped the shark in 2010. That's when he got married, bought a house and embraced all the traditional values he once despised. He became a parody of himself at that point.

Bart: No way, it was definitely 2009. That day he gave up his dream of being a social worker because there was more money in being a health inspector was a major nosedive.

Marge: I think you're both wrong. To me, Greg's life is as good as it ever was. It's changed, yes, and I can see why some fans of the first two decades are disappointed, but I think those changes are necessary to keep things fresh. Greg does some stuff now he never could have done in his teens and early twenties.

Lisa: Meh, I agree with Bart and Homer that his life declined at some point, but I don't feel the need to obsess over when and how. For the record though, it was probably June 4th, 2007.

Homer: Okay, but can we all agree that 2015 was the worst year of Greg's life so far? 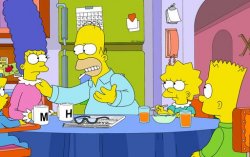 Marge: I suppose. Discovering his wife's affair with his boss and that chronic flatulence thing were definitely low points. There were still some good moments, though, like that fishing trip, and the birth of his daughter.

Homer: That daughter was just a rehash of the son he had in 2012.

Marge: I don't know, I kind of liked the repetition. Greg is very self-aware so I almost think it was intentional, like some sort of meta-commentary on repetition itself.

Lisa: Ugh. You all need to get lives. If you like Greg's life, keep watching it. If you don't, don't. There's no need endlessly argue over your personal tastes, to have these pointless, monotonous discussions full of verbose, longwinded rants that go nowhere, that say more about your tedious obsession with Greg's life than they do about Greg's life itself.

Homer: Maybe you're right. I suppose I should just ignore the later years of Greg's life and focus on the ones I like. '03-'09, mostly, and especially 2008, Greg's undeniable peak.