In an ongoing attempt to understand other people and eventually integrate into society, I've spent every free moment of the last three years digging for human skulls.

The excavation hasn't been successful. At all. I'm beginning to think that I should expand my search grid beyond the front yard and whatever stretch of beach I happen upon while properly equipped with a plastic shovel/bucket.

Why all the effort? You can learn a lot about people by examining their exposed craniums. Get beneath the surrounding layers skin and membrane and muscle, and you have the answers to all sorts of questions that would otherwise come at the expense of several minutes of conversation.

Every skull has a distinguishing characteristic that, when parsed by a careful observer, provides insight into the owner's behavior. In anticipation of my first experience with the real thing, I've been practicing with photographs. 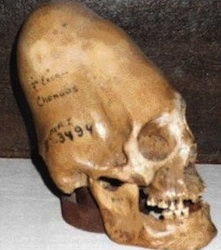 Note the peculiar shape of this elongated, boner-like cranium. This corresponded to a dramatic increase in brain size, which in turn granted the subject a greater capacity to think about boners. Alas, as I know all too well, dwelling on that subject to the exclusion of all else ultimately leads to disaster.

While others hunted and gathered, this skull's owner was living the good life, calculating the unified boner theory and tackling the impossible task of finding alternatives for the word boner. Eventually, his or her life was likely ended by the flint blade of a jealous clanmate. 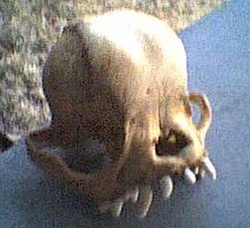 This fossil is quite old. Going by the apparent age of the photograph (note the grainy quality) I would estimate that the skull dates back over 300 million years.

If the teeth are any indication, this specimen brushed daily. That, combined with the unique orbital sockets which make it all but impossible to do anything but stare ahead in wide-eyed terror, makes it safe to assume that we're looking at the world's first Weather Channel anchor. 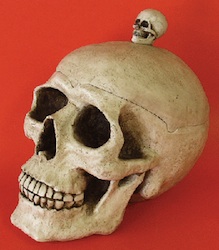 This guy. This guy. Do I even need to say it?

He was a huge hit at parties. Of course he was, those pronounced cheekbones are highly indicative of a sociable person with a natural predisposition to smiling. 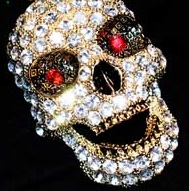 Fake. Sorry, but this is such a generic human skull that it can't possibly be real. Every specimen has at least one or two distinguishing features. This has none. It's like a fingerprint consisting of perfect concentric circles. 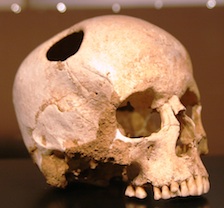 Now we're getting somewhere. The naturally occurring hole in this subject's head provided some tremendous advantages. If you know anything about overclocking computers, you'll know that airflow is, after all, key.

Meeting internet friends in person for the first time was also incredibly easy. "I'll see you at the mall at 4, I'll be the one with the exposed brains and jean shorts."

On the other hand, swimming and bathing was right out, as were handstands and traditional weddings that incorporated rice into the walk from the church doors to the limo. 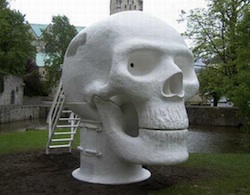 Something Awful Goon 1: Do you have stairs in your hou-

Something Awful Goon 2: SHUT UP SHUT UP. 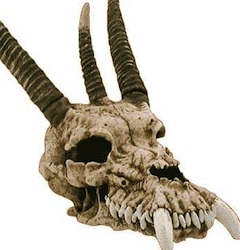 You know how people say that everyone on Earth has a doppelganger, someone that looks exactly like them without having any immediate blood relation? This guy never believed that - until the day that he went to see the premiere of Reign Of Fire.

Delighted to have been proven wrong, he spent the rest of his days as Matthew McConaughey's stunt double.