As recently stated in a previous news post of the past which may only exist in the fantasy world of my mind, I have been engaging in a long and painful journey to Seattle, Washington. This is because my original business plan in Costa Mesa, California, failed. You may be aware of the strategy I had been implementing the past couple of years, which consisted of the following:

1) I sign a contract with an Internet Network company, agreeing to work for a fixed amount of money per month.
2) Company decides to "cut costs" by failing to pay me and instead spends their money on 24-7 Tijuana donkey shows or hat competitions or whatever.
3) I attempt to pay rent and utility bills by way of interpretive song and dance routines. Despite receiving a strong review by the Orange County Register, who referred to my performance as "dear sir, please stop dancing and leave our offices before the security guard beats you up and shoves a 1974 Smith Corona typewriter up your 'secret area'," companies refuse to accept anything other than valid US currency.
4) Twelve gallons of blood, two pints of semen, and a couple quarts of that crazy orange crap inside my bones are sold each day to pay for bills. I became a walking liquid machine, shooting goo out of any orifice that will allow me to earn an extra 50 cents. Eventually I change all my business cards from "Failed Webmaster" to read "Crazy Walking Liquid Machine - My Goo For Your Cash." 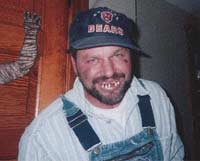 Sam Jain on the lookout for preteens.To add insult to injury, I am technically still employed by eFront Media, the company that has failed to pay me for even two weeks of work. They never fired me and I never quit, so I'm fairly sure the California Board of Labor will be quite excited to learn how Sam Jain's mentally disabled and retarded gimp of a company treats their fulltime employees. Of course I'm sure Sam is too busy trying to remove his private parts from key bathroom fixtures to worry about the Board of Labor, so this will be a nice surprise for him, like the time he opened up his birthday gift and realized his parents bought him a rag soaked with chloroform and a one-way bus ticket to "2,000 miles away from our house, you awful, awful little man." But enough Sam Jain bashing; the purpose of this news update isn't to brag that eFront Media Headquarters (aka "Sam's filth encrusted living room") will soon be receiving a not-so-pleasant visit from the Board of Labor. This news update is also for spreading slander and libel against Sam Jain, who I'd like to point out was once arrested for propositioning a scarecrow.

After seeing the proverbial last straw break like a toothpick across Jason Hall's hulking back, I had decided to give up on the entire Internet once and for all. I was dead tired of trusting in people, companies, and certain religious icons, only to get absolutely nothing back in return (except for broken contracts and the knowledge that some people have evolved from garden slugs). It was fun working for six months without pay, but when I hit the big "ten-zero" month mark, I began to have serious doubts, such as doubting if a diet consisting solely of Ramen noodles and floorboard tiles was particularly healthy. After seeing things in my bowel movements which resembled the killer embryos from "Aliens," I began to shy away from this strategy and instead leant towards getting the hell out of eDodge City. However, I soon met up with a company called Fusion, who seemed interested in hiring me and actually paying me money in exchange for employment. They seemed to be different that the other businesses I have worked for, particularly in the fact that they actually produce these weird things called "checks" every couple of weeks. It was a foreign concept to me, but one I was sure I could eventually adapt to. I accepted the job with Fusion and agreed to move up to Seattle, unaware of one little thing: I would have to move up to Seattle.

About a week and a half ago, I covered what I refer to as "Phase One Moving," which is the process of realizing how much worthless crap you have. Phase One Moving is much like walking through downtown Selma, Alabama, and shouting, "hey all you inbred motherfucking white trash crackers! I got two tickets to Jerry Springer and will award them to the first couple of honkies that are missing more than 75% of their teeth and are wearing a green foam hat that advertises either a tractor repair company or some place that ships industrial wheat!"; you suddenly become acutely aware of all the useless, disgusting trash that populates the place. Luckily I could simply throw out all the refuse in my apartment, as opposed to Alabama, which has to patiently wait for a large chemical spill that infects the state's Palmade supply. It was like a clearance sale, EVERYTHING MUST GO, applied to all the 11-year old UFO books and Ocean Pacifica clothing in my closet. Things got so bad that I had to eventually employ my mother to help me move. She offered such inspirational advice as, "you live like a pig, Richard. A pig. I can't believe we raised you this way. Where did I go wrong?" This helped the move go along much faster and distracted my attention away from anything that didn't revolve around what a horrible monster I was and how I should pray for death. My mother isn't a Jew, but she plays one on my webpage.

Eventually the car got packed and we headed off for Seattle, a city that according to many maps and high school teachers, is somewhat north of California. I wedged the cat into his plastic carrier, where he proceeded to begin his 48-hour marathon of "making noises that sound like a Ziplock bag full of rats being run over by a tractor trailer." He emitted pathetic mewing noises the entire trip, perhaps to let us know that he still existed in our plane of reality and his mouth was still fully functional. To enhance the "cat traveling" experience, buzz bombs of fur would routinely fly into the air and detonate when coming into contact with anything, sending a shower of cat hair in every direction. The inside of my car was like a snow globe after being shook up for a couple days, only instead of snow, cat hair and skin particles were lazily floating throughout the air. And instead of celebrating the Christmas holiday, I was thinking of something more pleasant, like having railroad ties driven into my hands and feet. Now that I think about it, the experience was nothing like a snow globe, so forget I ever brought it up. I know I have.

The trip from southern California to Seattle can best be described in one word: "very fucking long." You'll notice that I wrote three words there instead of one, which goes to show just how long the drive was. My mom attempted to make the drive even longer, by asking to stop and do goofy things like tour the Redwood Forest, visit Napa Valley, eat, and sleep in a hotel. My response was to apply more pressure on the accelerator and cause her whining to be drowned out by the sound of the engine shifting into 19th gear and speeding to roughly 200 miles an hour. When I'm making long roadtrips, my only concern is to get from point A to point B. Everything in between is simply a series of meaningless blurs that are meant to be viewed through the rear-view mirror. I was eventually forced to stop in "Somewhere, Oregon," which was one of those picturesque mountain towns that you see on holiday cards or advertisements for cough drops. My mom claimed that her "bladder was about to explode" and that she needed to use the women's restroom or she'd "die" or some other pointless feminine whining. I figured that a corpse would be of little use to me and my efforts to scream at the cat enough to make him shut up for over three seconds, so I stopped and we went to a grocery store.

Upon entering the busy shopping center, I began to sweat and feel my pulse rush, like the time the clown raped me in the San Francisco sauna. While my mom commented on how quaint and pretty the mountainside town was, I couldn't help but worry that every single person inside the store was teeming with tiny microscopic robots which made them mutate into robotic killing machines at the drop of a hat (NOTE: they don't always wait for the hat drop to start killing people). If any of you out there are familiar with Dean Koontz novels, you're undoubtedly aware of what I was going through:

Koontzitis - The fear that anybody living in a snowy, mountainside town is secretly a mutant sociopathic killer who is really, really strong and prances around the woods at night. 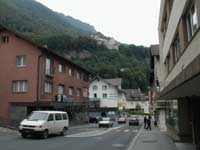 THIS INNOCENT BURG IS CRAWLING WITH NANO-DEATH!In all of his horror books, some megalomaniacal company sets up shop next to a little town and begins turning the residents into vicious, animal-like killers. More often than not, these towns are peaceful, innocent little burgs next to a set of foreboding, snowy mountains. I'm not exactly sure why Dean Koontz is convinced that the world's economy revolves around mutating people into a cross between Ted Bundy and a panther, but hey, it's not my place to question writers who earn more money in one day than I'll ever see my entire life. Maybe it has something to do with NAFTA. Regardless, I was scared to death while plodding through the frozen food section and watching the seemingly non-homicidal killers pass me by. I constantly thought that a cluster of nano-robots would fly up my nasal passage and force me to start stabbing elderly women at any moment. This replaced my previous irrational fear of "worrying that my head would spontaneously combust and send a shower of poisonous scorpions everywhere." As this update irrefutably proves, we eventually made it out of there alive, and I'm fairly sure my bloodstream isn't teeming with billions of tiny robotic monsters that will force me to bludgeon my physician to death with a garbage can lid. I took some Nuprin and all that cleared up right away.

The hours and hours and hours of travel finally apexed with a few more hours and hours of travel which led to a couple more hours and hours of travel until I finally arrived in Seattle, the home of "really cold rain." The movers are still in possession of all my worldly belongings, and they don't plan on giving them back until they arrive in town and demand roughly three times the original estimate of moving, so I'm still updating SA via a laptop with nothing installed but Norton Antivirus and something which has an icon of what appears to be a gnome engaging in oral sex with a camera. Hopefully my slightly-less worthless crap will arrive soon and I'll be able to unpack and set up SA headquarters again. Until then, however, I'll just be content knowing that somebody else is currently in possession with a truckload of junk which will probably be thrown out next time I move. It's the great cycle of life, folks, and I want to get the hell off it.