Tweeting for [BRAND NAME REDACTED]: A Q&A with the Hottest Team in Social Media!

I have long been fascinated by the concept of advertising on social media, and recently I was lucky enough to sit down for an elucidating interview with the team behind my favorite brand's intrusive efforts. It went swimmingly [mostly], and I was just finishing up the formatting when they contacted me to ask me to not publish the interview. Apparently they did some research into what kind of site SA was, and they found our previous writing on advertising via social media "less than respectful." As such, I had to remove any text identifying the brand and change the names of all involved, to avoid legal action. Nonetheless, I hope you will still enjoy their insights and tips about techniques!

SA: Well first of all let me say thank you for coming to do this interview with us today. Can you introduce yourselves for our readers, and give us a quick overview of your relationship with [brand]?

Caleb: My name is Caleb Garbador, and I'm in charge of all social media engagements and campaigns targeted toward non and half whites, although I do frequently collaborate with Frank and Kelly Sue when producing content to be deployed on their platforms.

Frank: Non-whites think differently from the rest of us. Their thoughts are more visceral, more honest - they're less weighed down by the day to day stuff. They're in tune with nature. Caleb does good work.

SA: Stellar! Wonderful. Let me start off by saying that I don't think it's any secret that you've really taken off in popularity with the youth demographic - my own teenage daughter is always tumblring or blogging about one jif [sic] of yours or another! I'm a huge fan myself, yours is one of the brands that I love to follow because it's one of the most consistently engaging, but how do you think you've managed to "crack" the younger generation?

Frank: Hey - great question. I think the main part of it is that we're all deeply passionate about [brand]'s brand here at [brand]. Without that passion, that fire behind the eyes, everything we created would be dull, it'd be lifeless, there'd be no point to it at all.

Frank: Seriously, though... most of the content we make - tweets and tumblr posts, mainly- are written in the voice of a certain kind of person, the sort of early to mid twenties city kid who describes their sense of humor as offbeat and is still riding high off an A+ for creative writing in elementary school, the sort of person who watches adult swim and wonders if they sell black t-shirts with the adult swim logo on them in white. But there's a sort of earnestness there, a sort of hint at a... moderately wacky style that is recognizably unoriginal but not monetized so much as to feel old.

Kelly Sue: (nodding) Our youth audience doesn't see these posts as "advertising put out by [brand]" - they're young, they're hip to that, it's 2014 for christ's sake. They picture a young sort of funny bohemian writer-type, one who has a pretty sweet gig at [brand], one whose material might even seem slightly subversive at times, like they've come up with a good gag at the expense of tumblr to tweet and consequences be damned! This perception is at the core of what we're selling.

Frank: Yeah, exactly - the tweets I write are popular, sure, but what people stick around for is this tweeter we've created. We're giving them glimpses of a person who seems real, who seems human, and who seems witty, but not so witty as to be funny outside of the context of "Holy Shit, can you believe that THIS is on [brand]'s twitter page!?" That's something I think Caleb's content embodies particularly well, right Caleb?

Caleb: Oh! Yes. Yeah, of course. It appeals to the kind of person who laughs at a tweet saying "dat trill [brand product] doe" from a sort of derisive, semi-ironic perspective? But it also engages more directly with the kind of person who sincerely thinks like that. Which is... you know. Certain people think that way. Which is fine, obviously. There are- there are definite biological differences. Just look at inner city crime statistics in-

Frank (interrupting): The point is that there are multiple ways to relate to this sort of content. There's something for everyone, because it looks like it was created by humans.

SA: Excellent. Wow, fantastic. Good. I'm sure a lot of your fans love to read the good stuff that they can't believe a company is saying. What I'm wondering is, how much does this help the brand? I can't imagine a lot of the people who enjoy the content will just go out and [verb associated with brand product] after reading a few tweets.

Frank: She's right. People don't tend to think much about their choice of [product associated with brand], so even the smallest thing can stick in someone's head and influence their choice. If someone wants to eat pizza, they're going to make their choice based on... let's say... which pizza is funniest. Oooh, the funny pizza, let's all buy the funny pizza, from on-line! The best and tastiest pizza must be the funny meme pizza that's your facebook friend.

Kelly Sue: Which of these pizzas is most "teen." Which pizza "gets" me. Oh, this pizza hates home-work too, better buy it and eat it forever. Creating that connection - it's pretty much our job in a nutshell. 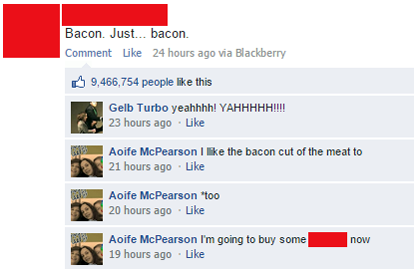 SA: Nice! I like pizza. Apropos of nothing, one thing you guys are great at doing are topical jokes; current stuff. Is it difficult to keep up with trends?

Frank: It actually makes things a lot easier for us, like when the doge meme was big...

Caleb: Oh, the doge meme... that was definitely a high point. We could make that little fucker say "much doge, such [noun associated with brand but with an extra e at the end]" for weeks. People love when he can't say stuff right. He's not - he can't say the words correctly. He puts es on the end. He uses comic sans - that's the bad font.

Kelly Sue: And of course, after that, we roll in with the low-level irony. Just saying stuff about how the doge meme was old hat. Over and over.

Kelly Sue gazes into the distance and sighs wistfully

Kelly Sue: Christ, that was a good month.

Frank: There's always another doge meme, though. Remember when gangnam style was big?

Kelly Sue: Oh wow, yeah. We got so much mileage out of gangnam style. Oppa [brand] style!!

SA: Incredible! It sounds like you're really dedicated to your jobs. How much does the job pay?

Frank: Depends on the level of engagement per content... For a 50% engagement level we can pull down a couple hundred thou (EDITOR'S NOTE: Thou = Thousand dollars), but it's not too hard to treble that once a week or so, moreso if there's a doge-level boom.

Kelly Sue: I have over 10 million dollars and my mansion is 10,000 feet long. (laughs genially)

Caleb: You've got to cover the basics. Have the basics, and then add the frills: That's the key. Walk before you can run.

Kelly Sue: A good thing to keep in mind is to do something unique to your brand. Some of my favorite brands that I follow are (AUTHOR'S NOTE: these people actually have "favorite brands." I'm not publishing the rest of this sentence. Ffuck off)

Frank: Just keep in mind that we all have our own brands, and we create content every day. There's really no difference between living a normal life to the fullest, and creating exciting new awareness-hashtags. It's life - 2.0.