Let's Give That Sonic the Hedgehog Movie a Chance 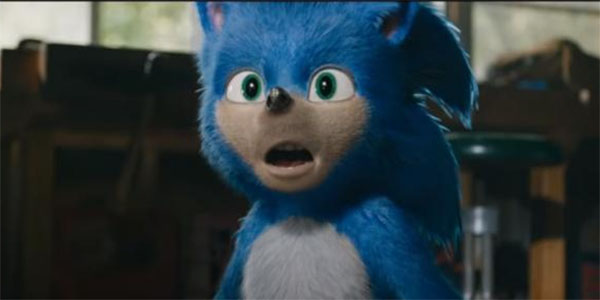 Like most of you out there, I live for content. Whenever one of the handful of remaining Hollywood studios decides to bless us with a three-hour slab of movie, I belly up to the trough and shout, "Feed me, I'm piggy!" I'll literally sit down and stare at any moving image for upwards of four hours while filling my Official Marvel Cinematic Universe Diaper because I've lost the ability to form any meaningful connection with another human being. So, of course, when I saw the newest trailer for the Sonic the Hedgehog movie, I told myself "I will literally run down any pedestrian who tries to delay me seeing it by even a second." Unfortunately my license was taken away a decade ago for trying to do just that for the premiere of X-Men Origins: Wolverine.

I've heard the complaints. Sonic looks "stupid." The movie appears to be "soulless corporate trash." The only people who buy tickets will be "stupid children" and "have the mental capacity of a lifelong butane huffer." All this is true, and somehow, I've already bought three tickets (I like to stretch out). After a long day of posting the famous "let people enjoy things" web comic as a response to the many Sonic naysayers out there, I had an epiphany: people should let people enjoy things. Is it so wrong that movie studio executives looked at a character whose popularity stemmed from a consistent design over the past thirty years and thought, "We can do better?" Sure, they could have explored his rich, existing universe of characters, but someone out there didn't take the easy route and instead decided to ask the question we've been asking ourselves for years: What if Sonic was in the real world and also a cop? It's really opened my eyes to the possibility of other things in my life being cops.

And another thing: Sonic is a kids' movie. Did I force my parents to watch lots of insipid, asinine movies as a child? Yes, and those are the movies I obsess over to this very day. I'll never forget the day I talked mom and dad into taking me to the classic Macaulay Culkin vehicle, The Pagemaster. Even though it's known as a terrible movie these days, my child brain couldn't get enough of a movie that showed books could be interesting if they moved around and talked and stuff. Though he wept openly after our post-movie Pizza Hut meal (my mother left him in the parking lot and I haven't seen her since), through the heavy, pained sobs I saw that even a stable adult like him could find joy in a so-called "terrible" movie. I try to carry that same spirit of childlike wonder in my heart to this day.

At the end of the day, will I have some issues with the Sonic movie? Yes. But even past the end of the day, I can name a lot of things worse than a bad Sonic the Hedgehog movie. Not right now, of course, but I'm pretty sure I asked you to give me until the end of the day. So go ahead and make your snarky little tweet. For every meme that points out Sonic's ghoulish teeth, dead eyes, or disturbing hands, there's a trailer reaction video on YouTube featuring sincere emotions from real fans who happen to be sitting in front of the same Funko POPs I have in my own gallery (formerly the bathroom) right now. So while it might make you feel "good" to mock the Sonic the Hedgehog movie in the moment, just think about this: maybe it's not for you. And as soon as we discover who this movie is actually for, I'm sure they'd be very disappointed in you.