January is our Hell. Please join us.

EXPECTATIONS: Were the Underworld movies really that influential? Is there a reason we have to endure one of these grim-n-gritty wars between supernatural beings every other year? I just feel like paranormal and brooding sexiness can only carry a trend for so far, but the past ten years have proven me terribly wrong. So here we find ourselves again, in a shadowy war that mankind doesn't know about, except we totally do because you keep telling us these stories over and over again.

As a side note, the Spanish name for this film is "Yo, Frankenstein", which is awesome, and makes me imagine a '90s Nickelodeon cartoon where all the classic monsters hang out together and have wacky misadventures while growing up and learning the true meaning of friendship. I'm going to imagine that's what I'm watching instead. 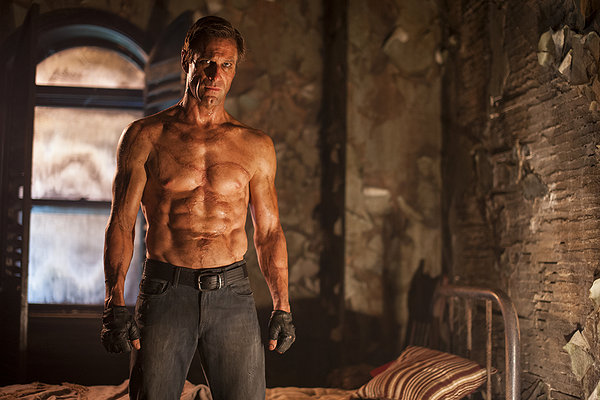 
REALITY: Here's some advice for all you aspiring filmmakers out there. When you finish your screenplay, use the Ctrl+F feature to search your dialogue for these phrases:

"I thought it was the end, but it was only the beginning."

"I thought they had forgotten about me... I was wrong."

"Now you can just look after yourself... You're good at that"

...and last, but certainly not least:

Do these phrases appear in your screenplay, which you wrote in the year 2014? They do? Congratulations, you're ruining movies!

All these cliches and more appear in I, Frankenstein, a film which follows Frankenstein's monster AKA Adam (Aaron Eckhart, who apparently learned nothing from listening to Christian Bale's growly-Batman voice), as he comes out of 200 years of hiding to hunt demons in support of an army of gargoyles created by the Archangel Michael. With me so far? Okay. See, the demon prince Naberius (Bill Nighy, who will apparently just do any of these scripts that come his way) wants to re-enact Dr. Frankenstein's experiment so he can re-animate a legion of corpses for all of the fallen demons to possess. In order to do this, he employs super-scientist Terra (Yvonne Strahovski, who... WAIT. They named ADAM'S love interest TERRA? At least it wasn't Eve, I guess), presumably because this movie needed a woman smart enough to reanimate the dead, but not smart enough to wonder why someone was asking her to do so. Oh, did I mention that the gargoyles turn into sexy humans on a whim? You probably already figured that, though, because of course they do. 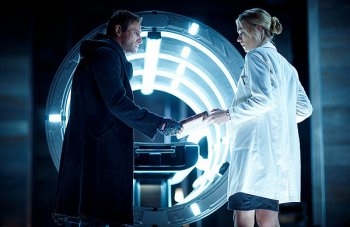 You have to help me... I'm simply monstrous!Let me just sum up everything I just said, because I feel it bears repeating: This is a film about an army of gargoyles who are trying to stop a demon prince from using Frankenstein's monster to unleash an army of zombies upon the earth. Would it kill us to crack a smile every once in a while? If the point of the movie is "Look, Adam really is a little bit human", then maybe you should, I don't know, humanize him a little? This is one of the most ridiculous plot summaries I've ever had to write, but that could be redeemed if the film didn't take itself so seriously, and embraced its campiness, like Abraham Lincoln: Vampire Hunter. Instead, we're forced to endure unearned, character-less, brooding, because apparently that's sexy. Hell, we're even treated to a Punisher-esque closing monologue as Adam stands on a rooftop, staring at... actually, what the hell are all these guys looking at during their closing monologues?

When we first meet Adam, he has just murdered Victor Frankenstein's wife, and indirectly killed Victor shortly afterwards. Adam's stitches are fresh, and clearly pronounced all over his face. 200 years later, this makeup has become too expensive for the film's budget, and the stitches have faded into scars. What this infers is that Adam, the mass of dead tissue re-animated by electricity, heals like a normal person. Normally I'd let such minor details slide, but this is a crucial point to note for a number of reasons. First, it continues this bizarre trend in PG-13 horror where we believe "attractive man with badass scars" somehow equates to "hideous beastly creature." Second, it makes our main character, the person we're supposed to side with, sound like a complete idiot every time he opens his mouth to complain about how non-human he is. You can't have it both ways, movie. You can't have us care about this character finding his not-missing humanity, and also get to have the scene where the female lead cleans the hero's wounds.

This is a movie with Playstation-2 CG, Buffy the Vampire Slayer-level demon makeup, and eighth-grade fan-fiction storytelling. Why am I asking for it to care about itself? Because I don't know why these films are so deeply dead set against any sense of fun and earnestness. Allowing this trend to continue with minor films like I, Frankenstein eventually lends itself to the creation of deeply cynical films like Man of Steel, and we don't need more of that. What I'm saying here, I suppose, is that there' a war... A war between the forces of light and dark, unnoticed by movie-going kind, a war that must be fought in the shadows of movie theater seats and in over-long blog posts and columns. It is a war I didn't ask to be in, but one that must be won. Wherever a movie is mercilessly and unneededly grimdark, I'll be there, passive-aggressively snarking into the night.

...Does anyone know how to get to the roof?

MINORITY REPORT: In an alternate universe, I can imagine the writer of this movie being so in love with every word he hammered out that he married the script and took it on a honeymoon before sending it off to the studio. That version of I, Frankenstein might have actually been fun. - Joseph "Jay Dub" Wade