*Knocks over a can of garbage. Snuffles through the scattered debris. Gingerly licks crumbs and sticky patches of blueberry from a muffin wrapper while panting greedily, the heavy breaths flapping wavy ripples along her lips. Turns to the camera.* 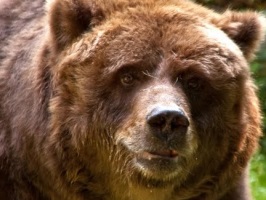 THE PLAYSTATION 4 SOLD NEARLY TWICE AS MANY UNITS AS THE XBOX ONE LAST MONTH WITH SOME EUROPEAN MARKETS REPORTING A 15:1 SALES RATIO THANKS IN PART TO SONY AMPING UP PRODUCTION TO MEET THIS INCREDIBLE DEMAND

*Stirs in her sleep. Dreams about a strange sound that makes her pause mid-step to sniff the air. An instant later a metallic dart sticks itself into her companion's neck. When the shouting men come to carry her lover away, Spring Cleaning Bear runs. Abandons him as she did all those moons ago when this actually happened. He is still conscious when she flees. Watching her silently. The dream never changes. This is painful, but some part of her embraces this constant reminder of her failing. Shakes her head, distantly wondering - as she often does - if she will ever see her mate again or if he is even alive, and turns to the camera.*

*Swats a magnificent salmon as it leaps in the air, knocking it to the riverside. Ambles out of the freezing water and lazily pins the fish with one enormous paw. As the salmon thrashes and gasps, Spring Cleaning Bear nibbles a bite out of its flank. Pink and purple organs are exposed to the air, glistening in the sun. There is surprisingly little blood. Dozens of roe spill out onto the frosty rocks and grass in an orange flood. Lesser lives give way to greater ones with a casualness that merits no response from the universe. Turns to the camera.*

*Placed in casket with a solitary white rose across her folded arms. The casket is laid upon a conveyor belt. Solemn music swells as the box inches toward the yawning face of a roaring furnace. As flames engulf her head, Spring Cleaning Bear turns to the camera.*

A WELL-ROUNDED INTELLECTUAL READS ALL VIDEO GAME NOVELIZATIONS, BUT ONLY DISCUSSES THEM WITH OTHERS WHO ARE PREPARED TO ENGAGE IN SERIOUS DEBATE BASED UPON SCIENTIFIC PRINCIPLES

*Sits up and bellows. So much pain. No memory beyond the gloved hands that pulled her from the pyre. Finds herself in a vat of pinkish goop, dozens of wires connected to her body. Tears the wires loose, the seemingly abandoned lab flickering and filling with sparks. Her flesh and fur appear the same, but Spring Cleaning Bear can feel that something has changed. Deep within, her bones throb with the promise of power. Her skeleton has been replaced with something else. Some unbreakable metal. Turns to the camera.*

GET YOURSELF ONE OF THEM PROFESSIONAL 3D MODELING PROGRAMS, THEN YOU CAN BUY HIGH RESOLUTION MODELS OF NAKED PEOPLE AND POSE EM HOWEVER YOU WANT, LIKE THEY'RE FUCKIN OR WHAT HAVE YOU