Stuck In A Kitchen Cupboard And Loving It

(This article was originally published in Stuck Fancy Magazine issue #417, from May 2012)

In a quiet upper middle class neighborhood just outside of Cape Elizabeth, Maine, there is a lovely house with a neatly trimmed yard and a backyard that overlooks the ocean. Inside this house, there is a kitchen cupboard. Its solid oak is cut in simple, modern angles that communicate an understated beauty. Within this cupboard is a woman.

She is the new face of being stuck in a kitchen cupboard.

Lucy Lemire opens the cupboard door just long enough to greet myself and Stuck Fancy's staff photographer. She demurely shakes our hands before offering us home baked muffins and glasses of lemonade from a silver tray wedged beneath her awkwardly bent knees. Once she is sure that we have been properly welcomed and settled in, she closes the door to conduct the interview. Lucy politely refuses to have her face photographed. The cupboard and the act of getting stuck, she insists, is far more important than herself. 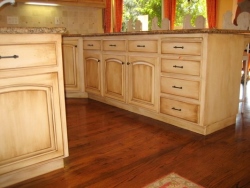 "I try to keep the door closed as much as possible," she explains. "What's the use of being stuck if you can see what's going on out there? That would seem like cheating to me."

This attitude is exactly the reason that Lucy has become such a prominent figure in a few short years. When I asked about her rise to fame, she deflected the attention.

"There have been some dark times as of late. The economy. Terror. The decline of American Idol. Things could have fallen apart completely, but the community of people who get stuck in kitchen cupboards really came together. I learned a lot about myself and who my real friends were - who bravely remained stuck in a kitchen cupboard and who freed themselves at the first sign of trouble. Those who stayed are the real heroes. I'm just one of many."

Lucy Lemire has been stuck in this kitchen cabinet for just over three years now, but she manages just fine. Her appearance is impeccable. Our brief interaction revealed an attractive woman with her dark hair kept in a neat bob, her slacks and white turtleneck sweater tasteful both perfectly clean.

Her family life is the American ideal. Husband Eric is a lawyer for a local baseball card destroying company, and her children are bright, energetic youngsters getting set for high school.

Though she is clearly proud of her kids, Lucy admits that there have been difficult moments.

"They've... experimented. You know, getting their heads stuck in the stairway railing. I don't approve, but I don't admonish them either. Sometimes you have to stay out of their way and let them find their identities. They'll figure it out eventually. Right now they think their mom doesn't know anything. One day they'll be stuck in kitchen cupboards of their own, and they'll finally be happy. They'll tell me how I was right all along, and they'll be thankful for the fact that I didn't force the issue."

"So senseless," Lucy sniffs. We cannot see her, but from the sound of her voice she is clearly fighting back tears. "It was so senseless how they took her out of the cupboard to bury her. She would have wanted to be buried inside the kitchen cupboard!"

No such fate will befall Lucy Lemire.

"This entire house is built upon a trap door. All of it's coming down, pulled into the Earth and sealed beneath thirty tons of quick dry cement."

She briefly opens the cupboard door and points to a conspicuous red button built into the wall near her bent neck.

"After I die, I just have to push this."