Identifying The Superhero That Saved Your Life

You were cornered by a pack of laughing criminals with sleeveless vests, tire irons, and billy clubs. They went into great detail about all the horrible things they were going to do to you, slowly creeping closer. In your most desperate time of need a hero arrived and saved your life. Before you were able to gather your wits, the bad guys had been tied together and your rescuer had vanished back into the night.

Now you want to send your hero a greeting card that's appropriate for the situation (the one with the drawing of a hound dog playing a banjo) but there's just one problem - you weren't familiar with their costume. How can you track them down to deliver the card? Think back to the dramatic rescue. Picture your hero, their mannerisms, anything that might have stood out. There must have been an important detail that can help you identify them. 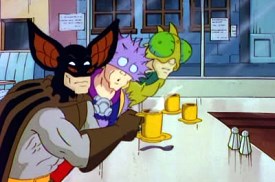 Did your hero arrive on a trusty steed? Was this horse dead and stuffed, with rollerskates on its hooves? Your hero was The Avenging Equestrian, friend to all people and animals who do not use rollerblades, unless ordered by a physician.

Was your hero's mask made of transparent plastic? That would be Blown Cover Lass. Her considerable strength is fueled by rage and bafflement over the fact that so many people know her secret identity.

Did the person that saved you have enormous ear gauges as well as tattoos on their neck and the parts of their face that were visible? Then it was Unemployable Lad that swooped in to your aid. Forever haunted by the mistakes of his past, he has dedicated his life to saving others. His opponents do their best to ignore the many things on his face and look him in the eyes. Off balance from the effort, they are left wide open to his dreaded Forehead Piercing Headbutt attack.

Were you saved by a masked raisin? Just a big, shriveled, person-sized raisin without arms or legs or any anthropomorphic features of any sort? That was Remarkably Similar To A Raisin Woman. She is, by all accounts, remarkably similar to a raisin. That lulls her opponents into a false sense of security. You see, she isn't a raisin. Not exactly. And that's what gets them. Actually, she is just a raisin. That's what catches her opponents off guard after she's lulled them into a false sense of security because they think she's just a raisin.

Was your rescuer wearing a cosmic ring that gave off waves of vast power? Did the hero choose not to use this ring's power, disabling your attackers via hand-to-hand combat after seeming to argue with himself? Then your hero was Conflicted Man. Maybe he should use the ring. It has so much power. Then again, what if it's too much power? What then? But what if, by not using its power, worse things are allowed to happen? Oh, the burden that has weighed on Conflicted Man's mind for the last fifteen years! Maybe he should just go ahead and use it already& just to test the ring's limits? But what if it has no limits and he can't control himself?

Did your hero use the word "gay" in reference to someone or something that he disliked? Did he describe anything as "retarded"? After the action was over, did he claim that he "totally raped" the bad guys? Was there a struggle in your mind as you considered whether to correct him or let it go because he saved you? You are not the first to be saved by Not Cool, Man and walk away feeling vaguely ashamed and guilty.

Was your here a man whose jaw was covered in stubble? Did he save you, then explain that in doing so he was actually just doing something that was self-serving? Did you get the impression that he was lying to hide the fact that he really was there to save you? That was most assuredly Anti-Hero. His motivations are hard to understand. He's not quite a good guy, but not a bad guy either. He's complicated. Also, he's made of antimatter.

Perhaps you were saved by a woman wielding an ancient sword, with a full suit of armor that accentuated her hips and posterior while leaving the swell of her ample breasts exposed to the air? That would be The Cleave. I know. Dude, I know. We all told her, and she won't listen.

There is one other possibility. Did your hero sweat profusely? Was his costume crusted with dried the dried salts of his perspiration? Was he the source of constant burping, each expulsion bringing the wafting scent of sour milk into the air? You were saved by Spider-Man.