Telemarketing and Spaz the Dog

Telemarketing: In addition to the normal amount of stalkers who call me up and ask if they can talk to Jeff K., I've been receiving an unhealthy amount of telemarketers attempting to convince me that I need their credit credits, magazines, magazine's credit cards, or credit cards to buy magazines.My old game plan went something like this:

TELEMARKETER: "Hello Mr.... Ken-yenk-ia, my name is Greasy Dan O' Collins and I'm from Capital One. Would you be interested in a new Capital One Silver-lined Platinum Gold Account with -7.9% APR and a rotating detachable propellor extension?"
ME: "No thanks, I don't need another credit card."
TELEMARKETER: "Mr. Koo-yack-ina, I understand your initial reluctance, but the new Capital One card offers such exciting and beneficial features as overdraft protection, automatic debt protection, and a Proton Cannon capable of destroying major geographical landmarks."
ME: "No really, I don't need another credit card. My apartment is full of credit cards. I can't walk two feet without stepping on one. My landlord says that if I get another credit card, he's going to evict me and get his two teenage sons to beat me up and make me drink dog urine. Thanks, but I really can't use another."
TELEMARKETER: "I can sympathize, Mr. Kee-yunk-ookaka, but I feel our new payment plan is catered just for a man of your stature. Every time you use our Capital One card, you earn 500 billion frequent Delta flier miles which you can use to redeem for fabulous prizes and secret gadgets courtesy of 'The Sharper Image'. The more you use our card, the more sins Jesus forgives of you!"
ME: "Hey, I gotta go my, uh, leg is on fire."
TELEMARKETER: "Sir, our credit card can help cure that!"
ME: (hanging up)

This is the "short" version of our talks. Usually the telemarketer doesn't give up so easily and ends up threatening to stalk and permanently cripple my parents if I don't agree to purchase whatever the hell they're selling. As you can tell, this method is not too effective and often costs me valuable time which I could be using to make fun of Jake Simpson over ICQ. After countless years of internal testing and scientific analysis, I believe I have found the best way to get rid of telemarketers:

TELEMARKETER: "Hello Mr.... Ken-yenk-ia, my name is Greasy Dan O' Collins and I'm from Capital One. Would you be interested in a new Capital One Silver-lined Platinum Gold Account with -7.9% APR and a rotating detachable propellor extension?"
ME: (shrieking) "GO EAT A BAG OF HELL!!!" (hanging up)

It's quite easy, fun, and relieves a lot of stress. Shouting "GO EAT A BAG OF HELL!" ends 98% of all conversations. Try it sometime!

Spaz: This cat acts more and more like a dog every day. For example, the new thing Spaz likes doing is playing "Fetch". He'll bring one of his toy mice up to me, drop it at my feet, and stare up at me. If I don't do anything, he starts making the most absolutely pathetic meowing noises he can. They're the kind of sounds you'd hear from a kitten in a Disney cartoon after it's mom was run over by a drunk team of firefighters. I can almost picture animated teardrops coming from the corner of his eyes shortly before orchestral music begins and Spaz somehow starts singing in a grown woman's voice about true love and the sadness in her heart. I wasn't even aware cats could talk (much less sing) until I saw the Disney channel. Now my entire world has been turned upside down and I spend a good portion of my day staring into Spaz's eyes and shouting, "HELLO HOW ARE YOU?" repeatedly and waiting for a response. No such luck so far, but I'll keep you updated; he's gotta start singing sometime. 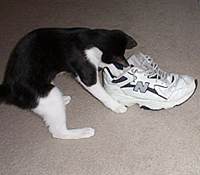 Anyway, like I mentioned a few hundred paragraphs before, Spaz enjoys playing "Fetch". I'll throw his toy mouse, he'll run at Mach 9 to where he thinks the mouse will land, and Spaz will grab it and bring it back to me. In theory. However, there are some minor flaws with this plan:

1) Spaz has a difficult time stopping. He can go from 0 to 60 miles an hour in under seven nanoseconds, but he's got a severe braking problem. I blame this on those faulty Firestone tires. This failure to cease movement results in Spaz often careening into walls, speaker stands, my couch, other people, the apartment next door, etc..
2) Spaz enjoys depositing the toy mouse into my shoe. While I'm generally okay with him using my shoe as a temporary receptacle for his toys, the problem arises from the fact that when he goes to withdraw the mouse from my shoe, he has a nasty tendency to take my sole with it. Apparently cats have a difficult time discerning between a 2-inch long grey wad of fluff and a size 11 green shoe sole. This is a fairly common mistake, as every time I go to a shoe store, I'm often seen cramming mice into the interior of my shoes. That's when the guards usually rush over and subdue me with enough tranquilizers to subdue a grown buffalo. 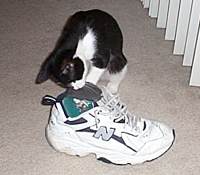 One time my next door neighbors, who already think I'm operating a meth lab from my bedroom, were over to complain about some terrible sound of running water that they thought was coming from my apartment (they also assume I have an obsessive-compulsive disorder and feel the need to scrub my hands free of deadly microbes every 10 minutes). While they were going on about whatever the hell they were talking about, Spaz jumped at my shoe and removed one of the soles in his exciting patented mouse attacks. I immediately stood to my feet and shouted, "THAT CAT IS STEALING MY SOLE!" while lunging after him. Needless to say, my neighbors quickly stopped complaining about the phantom running water sound and retreated to behind locked doors. If you ever want company to leave, start shouting about a cat stealing your sole. It drives 'em away faster than somebody announcing, "Jerry Springer's on!" at a Klan rally.

School Violence: The FBI recently released a "School Threat Report" which is apparently supposed to inform teachers and students if they're being threatened by somebody. The FBI spent two years studying school shootings and came to the following conclusion:

No, actually that'd be too easy of an answer for the FBI. Instead they released a report which lists "what to look for" in potential nutball students. Just for the heck of it, I wanted to see if I was a candidate for causing school violence (the report doesn't say anything about me needing to attend school, so I assume the fact that I'm not a student doesn't matter much):

What is the culture of the school and how is it affecting the child?

I couldn't figure out what this meant. I think it's how the subject reacts if his school was built on an Indian burial ground and class is continually interrupted all day by the spirits of the damned or something. If that's the case, I suppose I would be pretty angry if ghosts were trying to steal my soul for eight hours a day.

Does he or she have problems expressing anger?

"He or she"? If my teachers couldn't figure out my gender and repeatedly referred to me as "he or she", they're damn right I would express anger.

Does he or she show an inordinate fascination with violent movies, books and music?

While I'm not a big fan of "violent movies", I do like "books and music", so yeah, I guess so.

Has he talked or written about committing violent acts?

Every day. The violent acts are usually followed by the word "Gamefan".

I for one have a problem with this report the FBI released. In addition to the fact that the "symptoms" listed are common in most kids who are growing up and maturing, I'm afraid schools will end up using this as a checklist to profile potential Evil Serial Killers of Death. Just because some poor kid comes into class wearing a MDFMK t-shirt doesn't mean he should be treated as somebody who has a sniper rifle stored in their locker. Having piss-poor taste in music isn't any excuse for punishment (note to all you MDFMK fans: I was just kidding. Note to all you non MDFMK fans: I was being serious). Let's face facts: there's no way to profile potential school shooters. Every time some wacko goes nuts and blows away somebody at Dairy Queen, his next door neighbors always say, "I can't believe Billy Ray Joe Bob McCullins shot them people! He was always a nice and quiet man! He helped the orphans and nuns and his mother! I wanted to nominate him for Pope!" Almost ANYBODY can lose a screw and start shooting a place up. Let's try not to lump and entire group of innocent people into the "psychotic killer" title while searching for the next Columbine killers.

Since predictability is next to Godliness (on my scale at least), I have made six ultra-swank new "Heroes of the Gaming Industry" Trading Cards. Check it, yo: